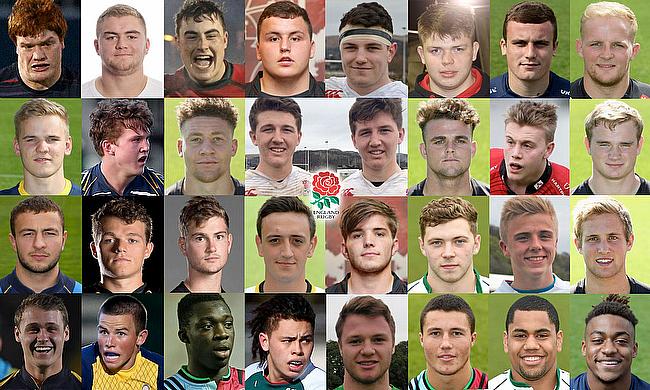 His side will be hunting their fourth World Rugby U20 Championship in just five seasons when they head to Georgia in the summer, with the U20 Six Nations in February and March also to be contested.

We take a look at the composition of the squad and any surprising or head-scratching omissions below.

The props make up one of the least experienced group of this EPS, with only Adams-Hale having been involved with the U20 set-up last season, having filled in when injuries struck the front row during the Six Nations.

Capps continues Yorkshire’s proud tradition of providing front rowers to the England age-grade sides, whilst Dawe has plenty of experience playing senior rugby in National One with his former club, Plymouth Albion.

Knight could well be the starting tighthead in this group and there is nothing surprising about his inclusion, but a few Gloucester eyebrows may be raised by the non-inclusion of Alex Seville, Knight’s loosehead counterpart at both club academy and England U18 levels last season.

Just the two hookers in this season’s squad – although there is cover from openside Joe Mullis – and they have some considerable shoes to fill, with the side’s last two first-choice hookers being Luke Cowan-Dickie, an England international, and Jack Walker, a two-time U20 world champion.

Another Gloucester omission comes in the form of Henry Walker, who impressed alongside Knight and Seville in both the England U18 and Gloucester academy front rows last season, but as the 2015-16 campaign wore on, he did seem to cede his international starting spot to Blamire.

Langdon was part of the London Irish U18 side that won the Aviva Academy League last season and has since made the move north to Sale and with Rob Webber suffering injury earlier in the season, Langdon is not too far from first team rugby in the north-west.

The second rows complete the inexperienced tight five but for what they lack in experience at U20 level, they more than make up for in ability and potential, with Isiekwe the standout player in the group.

He’s a physically-imposing and athletically-gifted lock and coming out of Saracens’ academy he will inevitably draw pressure-inducing comparisons to Maro Itoje, but based on both players’ performances at U18 level, they are certainly merited.

The trio of Caulfield, Clegg and Hill have all represented England previously at U18 level and the Six Nations could well be an audition for all three to see who best complements Isiekwe in England’s engine room ahead of the world championship in the summer.

England tend to identify players at U18 level and then stick with them through to the U20s and that seems to be the only way to explain Ehize Ehizode’s absence from this EPS, such were his performances for the Wasps academy side last season.

The flankers are a particularly exciting group in this class of U20s, with the Curry twins standing out amidst a number of other effective players.

Tom has already made his debut for Sale – at just 18 years of age – coming off the bench in their recent loss to Scarlets in the Champions Cup and a blindside-openside combination of him and his brother is certainly conceivable come the Six Nations.

Likewise, the Saracens duo of Earl and Nay could do a similar job, manning both flanks, whilst Xiourouppa has already made his Worcester bow, featuring in the squad that recently travelled to Russia to take on Enisei-STM.

With Eddie Jones lamenting the lack of traditional opensides in the English game, Mullis is a player to keep an eye on. A former hooker, Mullis best represents the skills of a stereotypical fetcher in the group.

The two noteworthy absences are Leicester’s Will Evans, who has been fast-tracked into the senior EPS, and Harlequins’ Archie White, who was involved with the team last season and still has another year of eligibility left.

Mercer is the most experienced player in this England pack, having featured for the side during their successful world championship campaign last season, as well as contributing regularly to the Bath senior side this year under new director of rugby Todd Blackadder.

Working with Blackadder and Tabai Matson will do Mercer’s development no harm at all and though his commitments with Bath may prevent him from featuring in the Six Nations, he should be a difference-maker for the U20s at the world championship.

England U18s star Tom Willis could be top of the list of potential call-ups should Mercer be unavailable and Haag wants a specialist eight in the squad.

Randall returns after his early call-up to the U20s last season and is joined by two very talented scrum-halves in Maunder and Mitchell, in a position battle that could easily go any of three ways in 2017.

Maunder recently made his debut for Exeter, coming off the bench in their loss to Clermont, Mitchell is held in high-regard by the coaching staff at Northampton and follows in the footsteps of his older brother, James, by being involved with the U20s, whilst Randall is an electric runner around the fringes.

Despite all of England’s success at this level over the last four years, scrum-half has been one position – with a notable exception or two – where they have struggled to develop elite-level prospects, but this group could change that over the coming years.

Comfortably the most experienced position group within the squad, England’s fly-half factory continues to churn out prospects at an astonishing rate.

Brophy Clews, Malins and Shillcock all featured last season, with Brophy Clews tending to start at 10, Malins at full-back and Shillcock even covering scrum-half when England’s injuries at the position got too much to bear. You now add Crossdale, who was exceptional at U18 level last season, into the group and it’s a selection dilemma that Haag will relish.

It’s almost certain England’s starting full-back will come from this group of players, with any of the four capable. Malins was favoured at that spot last season but could also feature at fly-half or inside centre, allowing Shillcock to man the 15 jersey, something which he has been doing for Worcester in the Aviva Premiership thanks to Chris Pennell’s injury.

Another young group, with Butler, Ibitoye and Umaga all stepping up from the U18 side and Wright as the only player in the group with experience at U20 level.

Ibitoye was captain of the U18 side last season and is a strong candidate to start at outside centre, although competition will be fierce with both Butler and Wright having senior club experience under their belts already.

Umaga, the son of former Samoan international Mike and nephew of All Black legend Tana, is another player who could have been listed at fly-half, having played there several times in the Leicester academy, although since his move to Wasps, he seems to be being used exclusively at inside centre.

Another exciting position group for Haag, all three specialist wings – Ibitoye is also comfortable on the wing if required – are dangerous attacking threats.

Aspland-Robinson returns from last year’s world championship-winning squad, whilst Odogwu was involved in the set-up and cover for the squad during that campaign. Since then, Odogwu has gone to impress at senior level in the Premiership and Europe and could be quite the X factor in the generally looser U20 game.

Cokanasiga comes into the group and may be the most exciting prospect of the last two years.

English rugby has been producing at almost every position, including wing, but they haven’t turned out a physical specimen like Cokanasiga at the position in years. At 6ft 4in and weighing in at just shy of 17st, not to mention having enviable speed and technical skills, there is a definite comparison to Nemani Nadolo to be made.

Bath’s Darren Atkins was a surprising omission given his work with the U20 side last season but with Odogwu likely to be retained by Sale during the Six Nations, Atkins could yet be involved with the U20s this season.