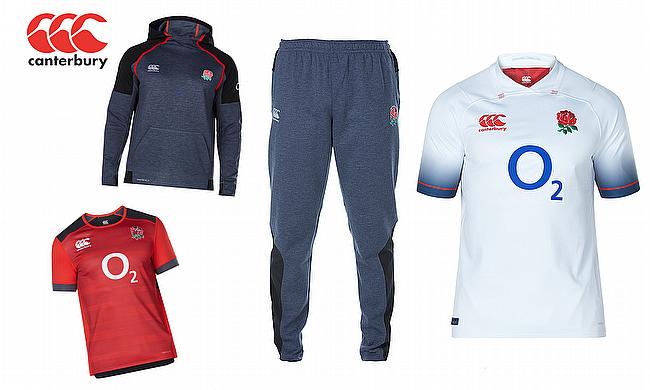 We've teamed up with Canterbury to review some select items from the new 2017/18 England Rugby range from their ‘Unbreakable Bond’ campaign.

With 113 years of rugby apparel expertise, Canterbury has again pushed the boundaries of innovation in the new England Rugby 2017/18 home kit unveiled earlier in the year. The kit was worn for the first time by the men’s and women’s senior teams in the 2017 Old Mutual Wealth Series.

A unique feature of the new kit available for fans is a commemorative plaque, each of which carries an exclusive number, part of Canterbury’s new ‘Unbreakable Bond’ campaign. Supporters will be able to buy individually distinctive shirts for the first time ever, with a different number on every shirt.

We don't know anyone who isn't partical to a rugby hoodie, and this one doesn't disappoint. Like the Vaposhield pants they boast water repellent technology that wicks away moisture, along with a snug hood fit to provide extra coverage from the elements and a mesh liner to give you the breathability too.

Also similar to the hybrid pants, the hoodie treads the line of comfortable loungewear and flexible activewear, doing a good job of it too. There is a 'Kangaroo Pocket' on the front for storage or hand protection, the quick drying properties ensure a decent amount of heat retention in challenging weather conditions during training.

This hoodie is on the market at £53 which isn't a bad price for a durable hoodie that can be worn during outdoor training sessions or to wear casually.

The training top doesn't feature anything revolutionary from Canterbury, it has their VapoDri+ adaptive technology, which helps with your body temperature during training. It's a fairly strong training jersey, tough enough to withstand the punishment from a heavy training session but does flex throughout the duration of your routine.

The look is pretty traditional with the authentic England Rugby colours with the Red Rose crest embroidered on the chest, with contrasting charcoal sleeves that unlike the playing jersey works as block colour rather than a gradient. There is a stretch bound neckline, stand alone fabric cuffs and flatlock stitching ensure a secure and very comfortable fit.

Overall a price of £58 seems far too high for a training T, and with the oversized O2 sponsor on the front you'll feel more like a walking advertiser than a player.

We didn't know what to make of these 'hybrid' pants when they arrived as they where a fusion of tracksuit training pants and comfortable joggers, but to our delight they do a great job of both. They have the Vapodri: Quick drying/wicks away moisture, so they work on a active level, but they also have the comfort of a slouchy jogger pant.

They don't look bad either (similar styling to the hoody), contrasting main and body colours creates a slightly more complex design than the usual one colour, with a mix of printed and embroidered logos around the waist band that doesn't overpower the final look. There's an internal draw cord which allows for an adjustable fit at the waist, decent side pockets, and a zip pocket at back to keep your valuables secure, which we'd love to know if ever gets used? There are ankle zips to allow for customised fit and ease when changing, which does make a huge difference when getting in and out of these after a decent workout.

These pants retail around £46 which we think is an agreeable price for pants that work in the gym and on the couch.

The new England's Rugby jersey has divided opinion, mainly due to the fading blue sleeve detailing, which differs from last years solid colour arms. Personally we feel that the addition of the blue fade isn't their most successful design option they could of gone with, but the red line around the newly elongated sleeve does work, and could potenitally have been better on it's own.

As for the fit, it's a tight one, which is fine if you're in fine physical condition but the average England Rugby supporter may struggle with some of the sizing, along with the restrictions around the waistline when enjoying a pint pre and post game. Of course there is considerable flex in the reduced weight fabric of this jersey (Which is their lightest ever, 20gsm off the previous style), but it could still prove a little too tight for the larger England supporter and doesn't have the weight/insulation of previous models.

The loop neckline collar is still a prominant feature, a design that's been synonymous with Canterbury since 1949, which, although has evolved through the years, still really works and moulds to the users neck contours. On the body there is embroidery and the English rose which is still found as a 3D injection-moulded emblem, first seen in the 2015 RWC and still looks as stricking as ever.

At £70 it's not a their cheapest item in the range, but doesn't disappoint and would be a great gift for an avid England Rugby enthusiast.

The new England Rugby shirt from Canterbury is available on pre-sale from Monday 7th August, 2:00pm and available in stores from Tuesday 29th August. Access online via: Canterbury.com and EnglandRugbyStore.com.