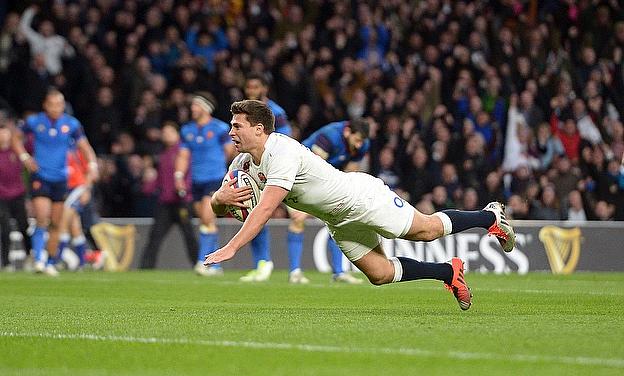 England fell agonisingly short of being crowned RBS 6 Nations champions for the first time under Stuart Lancaster despite toppling France 55-35 in an electrifying evening of mayhem at Twickenham.

Set the task of winning by 26 points following Ireland's 40-10 victory in Edinburgh, the favourites emptied the tanks in pursuit of a goal that remained elusive despite amassing seven tries in a thrilling clash that saw the whitewash breached a total of 12 times.

Only once before had England scored the required target against France in the tournament since World War Two - they triumphed by 29 in 2001 - and their failure to do so saw them finish runners-up for a fourth successive year.

Ireland retained their title and the Red Rose will reflect on the tries conceded to Italy and missed chances butchered against Scotland with profound regret knowing they fell just six points short of lifting the trophy.

An afternoon of high drama ebbed and flowed across the three staggered kicks-offs, beginning in Rome and sweeping to Edinburgh before a gloriously chaotic climax at Twickenham.

For 13 minutes home fans dared to dream as they celebrated Ben Youngs' try after just 95 seconds and watched giddily as France were repeatedly over-run in an opening that bristled with attacking intent.

Opportunist tries from Sebastien Tillous-Borde and Noa Nakaitaci that had their origins in English handling errors appeared to have swept the title out of reach, but it was only the beginning of a hair-raising showdown that at times defied logic.

It finished with mass ranks of white shirts mounting one final assault on the French line in search of the Championship-winning converted try, only for the whistle of referee Nigel Owens to intervene with seconds left.

The clinical touch that had been missing against Scotland was evident inside the opening two minutes as Jonathan Joseph, Mike Brown and Ford linked before Youngs arrived to fall over the line.

Handling errors from Luther Burrell and James Haskell interrupted English momentum, but white shirts continued to swarm over France at every turn.

The frantic start had Twickenham on its feet - the East Stand shook as the 82,000 sell-out crowd celebrated Youngs' try - but England's ambition proved their downfall as they leaked two tries in four minutes.

The first came when a Youngs pass under pressure flew through the hands of Courtney Lawes and fell to an unmarked Tillous-Borde on an empty blindside and the scrum-half easily outpaced prop Dan Cole.

Disaster struck England for a second time in the 18th minute when the blundering Haskell gifted possession to Scott Spedding, who launched a counter-attack that ran through the hands of Gael Fickou until reaching Nakaitaci who touched down without an inch to spare.

Gael Plisson's neck whiplashed backwards as he was drilled by a ferocious tackle from Lawes and shortly after French reprisals over the challenge had ceased, George Ford was able to land a penalty.

A converted try followed after Youngs had weaved his way his way into space before giving the final pass to Watson, nudging England back in front on the half-hour mark.

Owens reacted to a scuffle behind the posts with a warning to captains Chris Robshaw and Thierry Dusautoir that the behaviour was "unacceptable".

Ford finished the first half with a penalty - England now led 27-15 - but then kicked out on the full soon after play resumed to invite the pressure that led to France's third try.

Blue shirts pounded at the line until hooker Guilhem Guirado expertly slipped a pass out of the tackle for Maxime Mermoz to touch down.

A roller-coaster match continued its unpredictable path as the electrifying Youngs exploited a gap around the breakdown and raced clear until Ford arrived in support to finish the chance.

The title edged farther towards Dublin when substitute Rory Kockott rifled over a penalty, but England's response of a try through Jack Nowell after Lawes had won a critical turnover was evidence of their unwillingness to give up hope.

Haskell did his team no favours, however, when he flicked out a leg to trip Plisson and was sent to the sin-bin.

Poor defending on the right wing allowed France to plunder their fourth try, Nakaitaci escaping before finding loosehead prop Vincent Debaty of all people in support.

The benches were emptied as the final quarter mark passed with Danny Cipriani among the new arrivals, slotting in at full-back, but it was starting number eight Billy Vunipola who drove over next with help from brother Mako.

Twisting and turning, the game's next major incident saw France substitute hooker Benjamin Kayser burrow across the whitewash, only for Nowell to switch on the afterburners to renew English hopes.

Leading 55-35, England now needed just one converted try and when they kicked a penalty for touch they had the platform they needed.

A scrum penalty against France cranked up the tension to unbearable proportions, but a final drive was penalised inches short of the line and the dream was over.