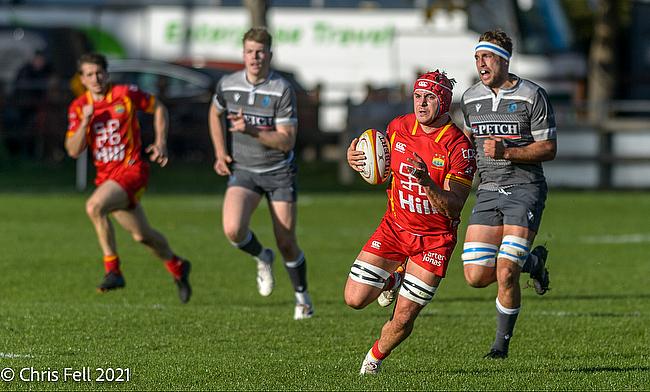 For the second week running, National Two South continues to catch the eye with the top two set for arguably the biggest game of the season so far.

If Rosslyn Park can conclude the month in the same way as they started it, then surely you would put them in the driving seat for the title ahead of their game in hand against bottom of the table Tonbridge Juddians on February 5th. Right now, Kieran Power’s side are eight points clear at the top and their cutting-edge display against Taunton Titans, spearheaded by Saracens loanee Brandon Jackson, suggests Park are back in the groove.

Before their final fixture in January away at Bishop’s Stortford, Round 18 sees the league leaders paired with Darlington Mowden Park, who weren’t in action last week as their fixture against Blackheath was postponed due to a frozen pitch. The North East club are only one point clear of the relegation zone, but they do have games in hand over the teams around them. Added to this optimism, DMP have shown what they are capable of when they face some of the top teams after gaining results against the likes of Cinderford and Cambridge this term, so could they turn Park over to add a twist to the promotion battle?

When Caldy (2nd) look to continue their fine season at home to Blackheath this weekend, the spotlight will be on the chasing pack. Sale FC (3rd) produced one of the performances of Round 17 as they smashed their way past Tonbridge Juddians to add an extra spark to their own promotion bid. After losing to rivals Caldy and Cambridge either side of Christmas, Jonathan Keep’s men returned to winning ways in some style (66-10) and now they sit just two points behind second spot.

Playing host to the North West outfit on Saturday will be Plymouth Albion, who last time out, lost some ground in the fight at the wrong end of the table. A tough day at the office against Rams RFC leaves the men from Brickfields in the bottom three so they will be desperately seeking an improvement this week as they target a third home win on the spin.

We travel to south west London this weekend as we take on league leaders @rosslynpark!

Linking it back to the ‘chasing pack’ element of our National One preview and Round 18 sees fifth vs fourth when Cinderford travel to Cambridge. The visitors are still looking to recapture the relentless early season form which catapulted them to the summit of the division because Paul Morris’ side have now lost five of their last six games.

Despite this torrid run, the Foresters are still only two points off second place with Cambridge five points further back. The hosts on Saturday do have a game in hand and will be feeling confident heading into this clash with another fellow promotion contender after beating Sale FC and Rosslyn Park in recent weeks. Richie Williams’ charges have only lost one of their last 12 games and coincidentally, their previous defeat before this superb run came against Cinderford. Will the same outcome repeat itself or will the Blood and Sand continue their excellent campaign?

Also in National One, Chinnor will be hoping to keep their name in the promotion frame when they entertain Birmingham Moseley and Rams RFC aren’t out of the conversation just yet so they will be keen to get the better of Leeds Tykes in Yorkshire. Elsewhere, Taunton Titans welcome Bishop’s Stortford to Veritas Park.

For the first time in a while, there is little bit of breathing space for Hull at the top of National Two North. Gary Pearce’s side head to Hare Lane this weekend to face Chester and they hold a five-point lead at the summit after title rivals Rotherham Titans lost ground against Bournville in Round 17.

What might have started out as a promotion pipedream has quickly turned into genuine belief for the Yorkshire outfit due to the seven-game winning streak they have put together. However, they will be aware there is still a long way to go in this campaign and Chester will be no walk in the park on Saturday. The hosts sit eighth in the standings and five of their seven victories this term have come on their own patch, but if Hull were looking for some encouragement, the Cheshire club have not beaten anyone in the current top half this season.

The extent of Sedgley Park’s (2nd) last-gasp triumph against Wharfedale in Round 17 probably won’t become clear until the conclusion of this season, but if you are challenging for promotion, those are the sort of victories that can take you over the line. The prolific Matt Gallagher was on hand to snatch a 29-25 win and Sedge now have Hull in their sights having played the same amount of matches.

After losing to Rotherham at the start of the month, this was the perfect response by Scott Barrow’s men and they will need to maintain that focus when they host Sheffield Tigers this weekend. Jamie Broadley’s side suffered a tough afternoon against league leaders Hull last time out, but when they had ball in hand, they looked to cause the table-toppers problems so if they can stay resolute in defence, they could make life difficult for Sedge in Round 18.

It's the battle of the Tigers at Park Lane, Whitefield on Saturday as @SedgleyTigers host @SheffTigersRUFC in @Natleague_rugby #Nat2N. We'd love to see you there roaring on our Tigers, but if you can't make it we will have updates on the local Saturday Sport Show. ????

Third-placed Fylde were excellent in their 38-5 victory over Huddersfield last weekend and will arrive at Harrogate confident they can continue to strengthen their promotion aspirations with another win at Rudding Lane. The Lancashire club have won four of their last five matches and are firmly in the mix for the title.

As for their hosts, David Doherty’s side are enjoying some improved performances which was highlighted by their 29-12 away victory over Blaydon in Round 18. Six points from their last two matches represents a third of the overall points Harrogate have accumulated this term, so they will be hoping this upturn in fortunes can continue. Saying this, they were beaten 80-26 by Fylde back in September so the size of the challenge will not be lost on the Yorkshire outfit.

We have mentioned Rotherham Titans a couple of times thus far and even though the men from Clifton Lane were left kicking themselves after last weekend, they remain unbeaten and have games in hand. Adam Byron’s side will want to immediately get back on the horse when they host Blaydon on Saturday.

Stourbridge (5th) will be looking to build on their win over Chester when they travel Tynedale in Round 18 and similar thoughts may apply to Hull Ionians who visit Huddersfield. Elsewhere in National Two North, Loughborough Students face Luctonians and Bournville go to Wharfedale in one of The National League Rugby Review Show’s featured matches.

I think it is fair to say the next few weeks will go a long way to determining the outcome of the National Two South title race. League leaders Clifton are currently on a club record of eight consecutive wins at this level and with clashes against promotion rivals Redruth and Esher on the horizon, this Saturday’s meeting with Henley Hawks (5th) holds a great deal of significance.

Matt Salter has presided over this brilliant run the Lavender and Blacks have put together and they head into the penultimate weekend of January with a one-point lead at the top. Henley are staging their own promotion bid and surely ending Clifton’s streak would add some serious momentum to their challenge. Nigel Dudding’s side had to settle for a 21-21 against Redruth last time out and with nine points the difference between themselves and the table toppers, this might be a must-win for the Hawks in Bristol. Unsurprisingly, this is the key game on The National League Rugby Review Show.

Anything Clifton can do Esher (2nd) can do better? The Eees are on a nine-game winning run and their unforgiving form leaves them in control of their own promotion aspirations. Peter Winterbottom’s side are one point off the top with two games in hand so if results go their way over the next couple of weeks, they could start February in pole position.

Another top of the table clash as our headline act?

For now, their focus will be on Round 18 when they face a Leicester Lions outfit who returned to winning ways last week. Head coach Gareth Collins was pleased by his side’s response against Westcliff and it means the Midlands club enter this weekend occupying sixth spot. Like Esher, the Lions still have two extra matches to play so a victory at Molesey Road could potentially bring them back into the promotion hunt.

Redruth (3rd) are targeting their first win of 2022 and in Hinckley, welcome opponents who have certainly entertained their fans since the turn of the year. The Reds suffered a late defeat against Barnes two weeks ago and had to show their resilience in Round 17 to earn a share of the spoils against Henley Hawks.

Nigel Hambly’s side are five points off the summit with a game in hand, but claiming their maiden victory in the second half of the season won’t be a straightforward assignment on Saturday. After falling just short in their tussle with Henley, Ben Pointon’s converted try snatched a dramatic 29-27 win for Hinckley against Old Albanian last time out. The Midlands club have shown their qualities in the last two weeks and they will need to be at their best again to come away from Cornwall with the desired result.

Worthing Raiders (4th) are certainly keeping pace with the top three and they will be aiming for a fourth straight win when they host Old Albanian this weekend whilst Guernsey Raiders renew acquaintances with Barnstaple. Elsewhere in National Two South, Barnes will be looking to bounce back against Westcliff, Bury St Edmunds take on Dings Crusaders and Canterbury face Rochford Hundred.