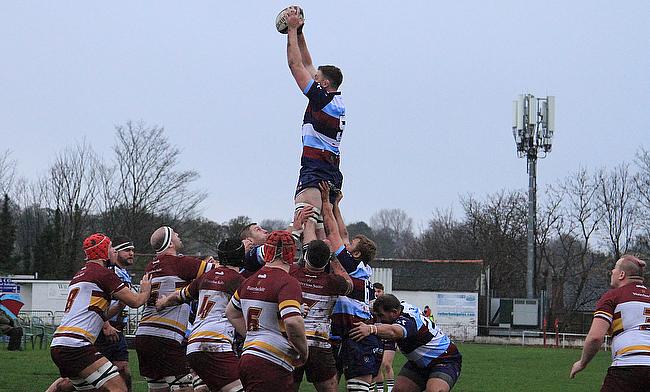 National One and National Two North rightly grab the headlines as tiers three and four return after the Christmas break.

Leeds Tykes are certainly a stronger proposition compared to the side who were humbled 60-10 at The Rock back in September, and their improvements just before Christmas will give them hope that they can provide a stern test for league leaders Rosslyn Park on Saturday. Phil Davies’ side have won three of their last six games and have already given promotion candidates Sale FC and Caldy a run for their money this term so they are capable of causing the table-toppers some issues.

The Yorkshire club have not been in action for over a month whilst Park ended a tricky block of festive fixtures by slipping to a defeat against high-flying Cambridge. Kieran Power’s men are now three points clear at the summit - with a game in hand over nearest challengers Cinderford - and having looked unstoppable for large periods during the first half of this season, the title contenders will be hoping to begin 2022 on the front foot.

An 11th victory of the campaign for Rosslyn Park could prove to be one of their most significant milestones this season given the four teams directly below them face each other this weekend. Second-placed Cinderford are once again back in this race for top spot after beating Birmingham Moseley in their final match before Christmas.

Paul Morris’ side arrested a three-game losing streak and they are now very much in contention for promotion after the RFU announced the top two sides in National One may earn a spot in the Championship for 2022/23, depending on the outcome in the second tier.

Some of the best tries from the first half of the season ??

To make sure you don't miss out on the action, subscribe to The National League Rugby Review Show ?? https://t.co/UnmXIYjmgO#Nat1 #Nat2n #Nat2s pic.twitter.com/fxEcIgzx0N

The same scenario applies to Cinderford’s opponents on Saturday - Caldy (4th) - who put together an imposing run of form in the first half of the season. Gareth Davies’ men, who returned to this level this term, have lost just one of their last 12 games and they also beat rivals Sale FC in their most recent outing. They are just five points behind this weekend’s visitors to Paton Field, so can Caldy be halted in Round 16?

A win for Sale FC (3rd) against Cambridge (5th) and a defeat for Cinderford could see the North West outfit move into second place in the National One standings, but it is unlikely the Blood and Sand will give them an easy ride in another standout fixture in the third tier. Alongside Caldy, Sale have been one of the surprise packages this term and they have only lost on three occasions since their 15-7 victory over Cambridge back in Round Two.

Jonathan Keep’s charges saw their sparkling season scuppered by the aforementioned Caldy in Round 15, so Cambridge will be hoping to add another dent to their possible promotion aspirations as they look to build some momentum themselves. Richie Williams’ side are only seven points behind Cinderford and given they beat Rosslyn Park last month, the men from Volac Park will be keen to write the next chapter in their own eye-catching campaign.

With all the attention focused on the summit of National One, there is also an equally important game towards the wrong end of the table this weekend as Plymouth Albion - who currently occupy a space in the bottom three - host Bishop’s Stortford, who sit just three points above them.

Elsewhere in Round 16, Taunton Titans host Darlington Mowden Park, Rams RFC will be looking to reboot their campaign at home to Tonbridge Juddians and Blackheath welcome Birmingham Moseley to Well Hall.

If the narrative for National One was all about the title race, then the first weekend of the New Year has also served up the same theme in National Two North…and then some. This Saturday, the top four all collide as one of the tightest promotion battles across the country continues and we begin by focusing on league leaders Hull against Stourbridge (3rd).

Not many followers of this division would have predicated Gary Pearce’s side to be on top of the pile as we entered 2022, but that is why National Two North has been gripping this term. In the run-up to Christmas, Hull’s promotion hopes were boosted by a derby day victory over Hull Ionians as well as superb wins against rivals Fylde and Sedgley Park.

The Yorkshire outfit are one point clear at the summit, but Stourbridge are only three points behind Hull with a game in hand. Neil Mitchell’s men will want to put a forgettable December behind them as two defeats from three matches just halted their own charge for the title. Stour did beat Hull in a very tight encounter back in September and we expect another close contest at Chanterlands Avenue this weekend.

Can Sedgley Park start 2022 by exerting more pressure on the table-toppers when they visit fellow promotion contenders Rotherham Titans? Since losing to Hull in November, Sedge have recaptured the compelling rhythm which has underlined most of their campaign and ruthless, recent displays leaves them with a chance to move to the summit of National Two North if they can earn a fourth straight win and other results go their way.

The Tigers know they will have to be on the money from start to finish, given Rotherham are the only other unbeaten team across the top four levels of English rugby alongside Leicester Tigers. The Titans currently sit fourth in the league standings and are four points behind Hull but crucially, Adam Byron’s men have two games in hand. Of course, those matches may well prove to be critical if the Yorkshire club are eyeing a return to National One, but their main focus will most certainly be on this weekend as the promotion race prepares for its most significant twist to date.

Fylde (5th) will be watching on from afar and they will be eager to start the year with another victory in order to keep pace with the rest of the leading pack. The Lancashire club suffered a mixed run of form before the Christmas break as two wins and two defeats saw them fall slightly down the table, but their last match, on December 18th, was much more like it from Alex Loney and Chris Briers’ side.

A dominant 40-10 victory over Chester got them back on the right track, but Loughborough Students will be hoping to add to Fylde’s recent inconsistency. However, the Midlands club haven’t fared much better over the last month having accumulated one win from their past four matches. In that run, Loughborough have faced both Rotherham and Sedgley Park, and with January exams just around the corner, this will be another tricky test for the Students on Saturday.

Also across National Two North in this opening round of 2022, Hull Ionians travel to Tynedale and Chester host Luctonians whilst Sheffield Tigers go to Wharfedale, Bournville face Harrogate and Huddersfield entertain Blaydon.

Redruth return to action with a two-point cushion at the top of National Two North, but Nigel Hambly’s side will know there is still an awful lot that can happen between now and the end of April. Whilst the final round of matches before Christmas was depleted due to Covid, the Reds were one of the sides who were able to fulfil their fixture, and a victory over Barnstaple concluded an unbeaten December for the league leaders.

However, they will be expecting a tough test when Barnes visit The Recreation Ground on Saturday. The men from the capital have not lost any of their last five matches, with their latest result being the 17-17 draw with Henley Hawks which made the headlines for all the right reasons. The Hawks’ act of sportsmanship means Barnes haven’t been beaten since the end of October, so could they stretch that sequence against one of the promotion candidates in Round 16?

If Barnes were to become only the third side to beat Redruth this term, the good news for the table-toppers is that two of their possible title rivals face off on Saturday. Second-placed Clifton have been ever-present towards the right end of National Two South in recent years and they find themselves in familiar surroundings again after stringing together six consecutive wins.

Redruth do have a game in hand over the Lavender and Blacks, but a victory for Clifton against one of their fellow promotion challengers would keep them on the coattails of the league leaders. That is easier said than done as their opposition this weekend, Leicester Lions (6th), have also won their last six matches. Impressively, four of those successes have come on the road so the Midlands club will believe they can depart Bristol with the desired result.

You can argue third-placed Esher are actually holding all the cards in this fascinating battle for pole position in National Two South. Peter Winterbottom’s side are only three points off the top with games in hand over the majority of the teams around them, but the only way the Eees can take the reins in this title battle is by continuing to win matches.

That is precisely what they are doing because after experiencing a slight wobble in October, Esher hit back and are now on a seven-game winning run ahead of their meeting with Dings Crusaders. By contrast, the visitors to Molesey Road have not picked up a victory in any of their last five games, but the Bristol outfit have been able to secure a bonus point in nearly all of those matches. This clash with Esher means the Crusaders would have faced the top three sides consecutively, so will they fare better this time around?

Worthing Raiders (4th) will be looking to begin 2022 by nipping their recent inconsistency in the bud as they take on Bury St Edmunds in Round 16 whilst fifth-placed Henley Hawks take the trip up north to face Hinckley.

Elsewhere, Old Albanian go to Canterbury, whilst Guernsey Raiders v Rochford Hundred and Barnstaple v Westcliff have been postponed due to Covid-19 concerns.