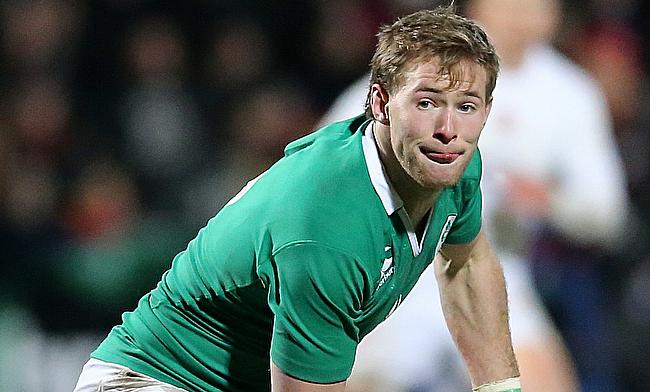 Kieran Marmion scored the only try of the game
©Press Association

Connacht edged out Leinster in a gripping GUINNESS PRO12 dogfight, winning 7-6 at the Sportsground to move four points clear at the top of the table.

Ian Madigan kicked two penalties on 41 and 62 minutes and Leinster's international-laden bench had them within a couple of metres of a match-winning try.

However, Pat Lam's men defiantly held on to make it seven victories in a row in all competitions and hand Leinster their first interprovincial defeat of the season.

There was a flood of knock-ons in a typically helter-skelter opening to this derby showdown. Defences were on top but Garry Ringrose caught the eye on a couple of clever runs.

The deadlock was broken by the hosts when good hands from Bundee Aki and Tiernan O'Halloran released Niyi Adeolokun on the right and the winger's kick over the top was dotted down by Marmion just ahead of his opposite number Luke McGrath.

MacGinty added a crisply-struck conversion for 7-0 and both he and O'Halloran used the elements to good effect to keep Connacht in the visitors' 22.

Handling errors prevented Lam's side from building further pressure and, despite a fine ruck penalty win by Denis Buckley, MacGinty was short with the long-range kick.

Leinster increased their share of possession and territory approaching half-time, and Ringrose briefly threatened from a kick through after O'Halloran had fumbled a loose pass in his 22.

Madigan opened Leinster's account barely a minute into the second half and replacement Zane Kirchner made an immediate impact, breaking through midfield but with Dominic Ryan unable to hold onto his pass.

Replacement Robbie Henshaw, who will move to Leinster in the summer, injected some timely energy into Connacht's play, however a lost lineout and another knock-on robbed them of momentum.

A turgid third quarter saw Connacht unable to break out of their own half, and Leinster unloaded their power-packed bench on the hour as Mike Ross, Devin Toner and Eoin Reddan entered the fray.

The otherwise excellent Marmion was caught offside from a scrum, allowing Madigan to boot the visitors to within a single point with 17 minutes left.

Connacht blew a lineout opportunity after Leinster's front row had collapsed, but the home side's dogged defence saw them triumph despite a concerted late surge from their provincial rivals.