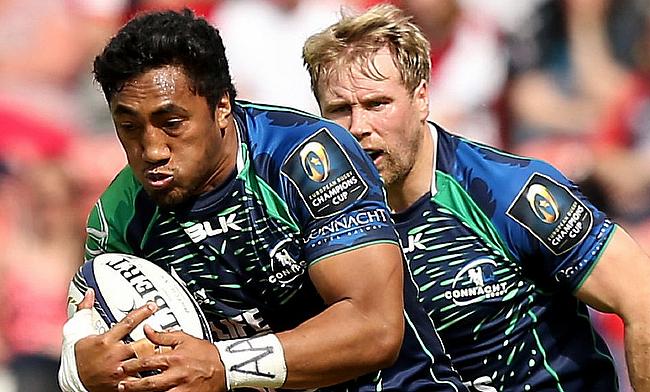 Connacht came from behind to secure a bonus-point 26-21 victory away to Newport Gwent Dragons on Thursday night, a result that sees them move four points clear at the top of the Guiness Pro12.

First-half tries from wing Matt Healy and full-back Tiernan O'Halloran and touchdowns after the interval from number eight Eoghan Masterson and centre Bundee Aki, plus three Craig Ronaldson conversions, were just about enough to see Connacht home in an enthralling match at Rodney Parade.

The Welshmen will be gutted to have lost so narrowly at the game's climax;  with only 12 minutes left, the Dragons led 21-14 after centre Adam Hughes and wing Ashton Hewitt had both crossed the whitewash, with fly-half Jason Tovey landing a penalty and his replacement Angus O'Brien booting a conversion and two penalties.

The opening half turned into a superb rugby feast as the lead changed hands four times.

Dragons were first onto the scoreboard when Connacht infringed inside their own 22, allowing Tovey the simplest chance to boot a penalty.

But the Irishmen's reply was almost instant as they got into the home 22 for Healy to charge in under the posts, making Ronaldson's conversion easy.

And with the game barely 20 minutes old, the lead had changed hands twice more. Centre Adam Hughes took advantage of a Tovey charge-down as Connacht tried to clear their lines to scoop up the ball and run over.

The Dragons suffered a blow, however, as Tovey limped off as full-back Geraint Rhys Jones lined-up the failed conversion.

Connacht would not be outdone and a creative move across the back division saw full-back Tiernan O'Halloran given plenty of space to crash over on the left, with Ronaldson adding the extras.

The try feast showed no signs of easing as the Dragons produced a mirror image of O'Halloran's touchdown at the other end for Hewitt to romp across, and O'Brien to convert from wide out.

The home side went in 15-14 ahead but not before Connacht fluffed an easy chance to score their third try when they knocked on within centimetres of the Welshmen's line.

And, by the hour, the Dragons led Connacht by seven points after two O'Brien penalties stretched their lead to 21-14.

Connacht, however were not out of the game, and their ambitious attacking play was rewarded as the match reached its conclusion.

From their first real foray into the home 22 in the second half, Masterson was at the back of an attacking maul from a line-out to rumble over on the left.

And only moments later, Connacht had not only once again claimed the lead, but also tacked on a try bonus point when Aki ran through a gap to the posts from 20 metres and got home under a pile of bodies for their fourth touchdown, which Ronaldson converted.

Connacht then resisted four minutes of intense Dragons pressure as the home side went for their fourth try in an attempt at least draw the encounter.

But a knock-on after countless phases saw the Irishmen prevail and take a ninth league win of the season - and, at least temporarily, top spot.