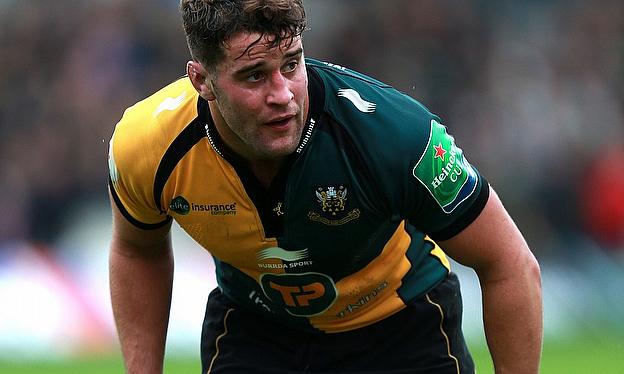 Northampton flanker Calum Clark will captain England Saxons in their clash against Ireland Wolfhounds at Gloucester on Saturday.

Clark, who served a 32-week ban in 2012 after being cited for foul play in the LV= Cup final between Saints and Leicester, leads a Saxons side containing seven debutants.

Watson, 19, will line up for the Saxons after being temporarily released from England's RBS 6 Nations squad in order to give him senior international experience on the wing.

There is also a start for England elite squad member Freddie Burns, with the Gloucester fly-half named as Saxons vice-captain.

Burns, Gloucester wing Charlie Sharples and Wasps scrum-half Joe Simpson are the only capped England players in a Saxons line-up with an average age of just 24.

Clark commanded headlines for all the wrong reasons when he admitted hyper-extending Leicester hooker Rob Hawkins' arm in the LV= final at Worcester. Hawkins suffered a serious elbow injury.

Clark was cited and faced a charge of an act contrary to good sportsmanship. He was suspended by the Rugby Football Union and also banned by his club.

It meant that Clark, who joined Northampton from Leeds in 2010, missed out on the possible chance of touring South Africa with England in 2012.

Following the incident, Leicester rugby director Richard Cockerill said: "It is a pretty poor act. I think it's completely out of order and, in my opinion, it's as bad an injury as I've seen on a rugby field."

Clark, though, subsequently returned to top-flight rugby and delivered a number of impressive displays in Saints colours.

"Calum Clark has been a positive influence from the moment he arrived in camp," RFU head of international player development Joe Lydon said.

"He commands the respect of the group and I am sure he will lead from the front.

"Freddie Burns has also made an outstanding contribution in the time he's been with us and he will be vice-captain at Kingsholm.

"The players in this squad have worked very hard in a short week and there will be a lot of tremendous talent from the Aviva Premiership on show this Saturday and against Scotland A in Glasgow on Friday week.

"Players can make an immediate step from the Saxons into the senior side but we are also looking at the development of those players with the longer-term potential to push for places in England's World Cup squads in 2015, 2019 and beyond.

"First and foremost, though, we want to win against the Wolfhounds and Scotland A. The recent history of these games tells us it will be hard work against two fiercely-competitive teams."