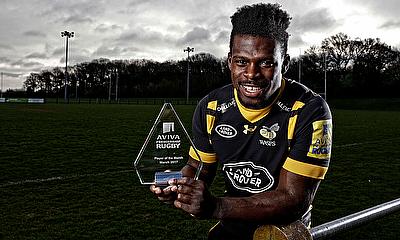 A player who has explosive power, blistering speed and is a joy to watch has been named Aviva Premiership Rugby Player of the Month for March 2017.

Christian Wade has been in stellar form for Wasps as they cemented their place at the top of the Aviva Premiership Rugby table.

And the wing – who has scored 14 league tries this season – was rightly lauded by Rugby World Cup winner, Will Greenwood.

“Christian has been in sparkling form,” said Greenwood. “He scored one try against Worcester that very few people on the planet could score.”

Wade was judged by a panel of experts as the man who made the biggest impact in the League over the month. He was involved in a three-way battle for this month’s title, eventually beating fellow wing Chris Ashton and Exeter Chiefs’ back rower Don Armand to the prize.

Greenwood added: “Christian has a low centre of gravity, explosive power, blistering speed and is a joy to watch.

“The Wasps fans get a ‘deep breath’ moment every time he gets the ball. What follows normally has your jaw on the floor.”