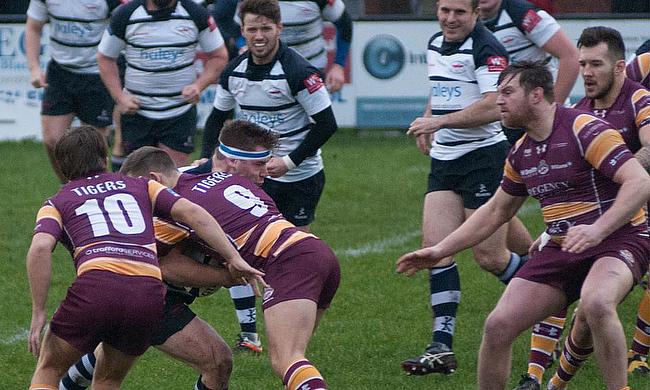 A year of rugby is coming to an end but the rugby community come together across the country at all different levels to celebrate.

Rugby in the North West was starved of action during the Rugby World Cup and many are worried that rugby union in the North is under threat. Former England international Paul Ackford wrote that Eddie Jones, England Rugby's new coach, should avoid looking north.

He may have a point if Sale and Newcastle fail to secure Champions Cup European Rugby but as we have found there is rugby talent and a thriving rugby community in the North West. From the home of Bill Beaumont, Fylde Rugby, to one of rugby's newest clubs Tarleton there is rugby to suit all; whether players, coaches or fans. So last weekend I took myself off to Lightfoot Lane in Preston for a Christmas treat; National 2North. There I found a massive gathering of rugby union fans to celebrate Christmas and rugby in the North West at Preston Grasshoppers. The game was sponsored by Haleys Business Advisers. There was a fund raising event for the North West based charity Joining Jack - a charity closely supported by current and former England Rugby Union and Rugby League players; most notable is Owen Farrell.

No rain for the first ten minutes and Sedge were on fire with tries from Andy Riley and Danny Waddy; the second from a lineout and driving maul

Then it started to rain and if by magic, Grasshoppers changed. In the scrum, tight head Pete Altham dismantled the Sedge tight five. A beautiful sight to see a tight head get the nudge to open up play for Sam Whyte to ghost past the Sedge defence and set up Jordan for a try. Half time saw Sedge lead but Hoppers in the ascendancy.

The home crowd exalting the virtues of the on field player/coaches of Dew, Viney and Holmes.

Into the second half and Hoppers strangled the game. Although Tigers attempted to gain the initiative back, their forwards looked off the pace and their efforts to employ kick chase seemed to give the ball to either Viney or Taylor.

Dew used rolling replacements well and kept great continuity. The fresh legs constantly stretching the tiring Tigers. Even when Hoppers Tomlinson was yellow carded, the Tigers could not get out of their own half.

As Hoppers went back to 15 men, Tigers went to 14. The ever effective Whyte again used this to Hoppers advantage and Jordon went over for his second try and the game was Hoppers.

In the final analysis Hoppers deployed a straight forward and simple gain plan led by the inspirational Napier. They kept possession, kept their on field 15 fresh and worked for each other.

Tigers probably expected a tough game but will have targeted 5 points. Once the rain came their game plan was less effective but they persisted.

Despite monsoon rain the crowd were out in force and for Hoppers, a Christmas Cracker. A real celebration of rugby in the North West. Let's hope a North West team in National 2 North can get promoted this season so we can have a Lancashire Hotpot with Fylde.