Can Hinckley stop the Huddersfield charge? 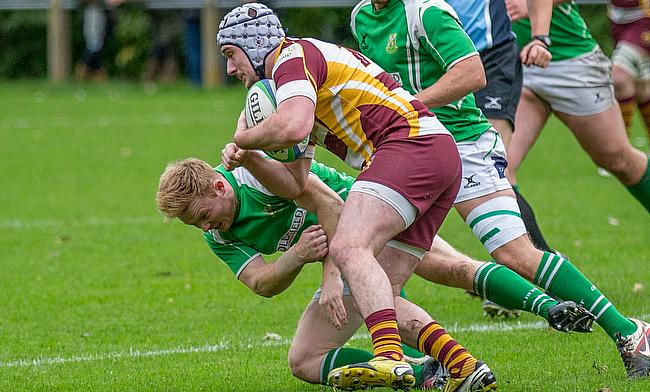 Huddersfield have not lost since September 8th
©John and Ro Burridge

Huddersfield may not be sitting at the summit of National Two North as the second month of the season concludes, but their scintillating form as pushed the Yorkshire outfit right into the promotion picture.

Gareth Lewis’s side are currently third in the league standings, but they are just a couple of points off the top two spots after six straight victories.

Field have a golden opportunity to break into the promotion places when they host second placed Hinckley this weekend, while league leaders Hull Ionians will be hoping to keep their fellow rivals at bay when they travel to Fylde.

Also, Sedgley Park will be looking get their top two ambitions back on track when they take on Peterborough Lions while Chester and Stourbridge face-off at Hare Lane.

Fylde and Hull Ionians meet for the first time since they were both relegated from National One and it is the visitors to Woodlands on Saturday who currently lead the way in National Two North. The I’s are two points clear at the summit after four consecutive wins, but the men from Brantingham Park left it late against Chester last week to stay on top of the pile.

A late Lewis Minikin penalty made sure Hull remained in pole position, but looking to hamper their promotion hopes will be Fylde. Hull Ionians have made an excellent start as they aim to return to the third tier, while it has been a mixed bag of results for the Lancashire club. Warren Spragg’s men occupy seventh place as things stand and are 10 points off the top two going into Round Nine. Fylde have also lost three of their last four matches and they were beaten by Hull Ionians in both games last term so a win this weekend for the men from Woodlands would certainly be a good way to end the month.

Last week, Hinckley recovered from their first defeat of the season in a professional manner as they ground out a victory over Fylde at Leicester Road. The Lancashire club did have a player sent-off, but Hinckley showed their class to return to winning ways as they stayed right in the thick of the promotion race.

The only try came from Jack Dickinson, but 11 points from @Mr_Joe_Wilson was enough to give Hinckley a 16 - 5 win over @fylderugby on Saturday. Here are the highlights pic.twitter.com/tFlWYNNJDp

George Chuter’s side are second as things stand, but breathing down their necks are third placed Huddersfield. The Yorkshire club are the form side in the division having won six matches on the trot and Gareth Lewis’s men seem unstoppable at present. The visit of Hinckley will be their toughest test to date, but they will move into the top two if they are able to make it seven victories in a row.

With both Huddersfield and Hinckley facing one another in Round Nine, rivals Sedgley Park have the chance to work their way back into the heart of the promotion race after a disappointing loss to Tynedale last time out. Matt Bebbington’s side were defeated by a late try and it leaves them six points off the top two as October concludes.

However, last year’s runners-up are back at Park Lane where they have won all three of their matches and they will be favourites to add to that tally when Peterborough Lions arrive in the North-West. The Lions are currently rooted to the foot of the division and the newly promoted side are already 11 points off safety after eight rounds. Simon Moyle’s men have picked up just one victory and that came against a strong Chester side so can Peterborough Lions produce a similar result at Sedge this weekend?

Chester were minutes away from toppling league leaders Hull Ionians in Round Eight, but the Cheshire side saw a victory snatched away from them right at the death. It meant the men from Hare Lane fell to their second defeat in three matches so they will be looking to end this mini-blip in form as soon as possible as they prepare to host Stourbridge.

Chester have won all three of their matches on their own turf thus far, but Stour arrive in the North-West with confidence behind them. Back to back wins over Wharfedale and South Leicester at Stourton Park has lifted Neil Mitchell’s side into the top six, despite a slow start to the campaign. The Midlands club are now eight points off the top two so a hat-trick of victories could launch last year’s bronze medallists into the promotion race.

Another five points at the Avenue would have been pleasing for Wharfedale last Saturday. After defeating Preston Grasshoppers at the start of the month, Dale followed up that home win by beating Macclesfield in Round Eight and now they find themselves mid-table after four victories so far this term.

The Greens will be satisfied with the start they have made and they can end October on the front foot by claiming their second away victory of the season at South Leicester. The hosts come into this encounter having lost their last three matches and their early season burst now seems like a lifetime away as they currently sit just above the bottom three. The Midlands club were involved in a 102-point thiriller with Stourbridge last weekend, but what the men from Welford Road will be craving is a solid home win on Saturday to reignite their campaign.

After suffering defeats against Macclesfield and Leicester Lions – two sides currently below Otley in the table – the men from Cross Green bounced back last week with a victory over Sheffield Tigers away from home. Charlie Maunder and Tom Casson’s side now sit ninth in the table and they will be keen to shrug some of their inconsistency when they host Tynedale this Saturday.

Tyne will arrive in Yorkshire in high spirits after an excellent result over promotion chasing Sedgley Park in Round Eight. Ben Woods’s men secured their second victory of the term thanks to a late Chris Wearmouth score, but they remain in the bottom three. However, they are level on points with Leicester Lions – who currently occupy the final safety spot – and they have a game in hand, so a win at Otley would put them in a good position to start moving away from danger.

Sheffield Tigers take the trip to Lancashire this weekend to face Preston Grasshoppers and the Yorkshire club will arrive at Lightfoot Green searching for a welcome win. Jamie Broadley’s men have lost their last three matches and their home defeat to Otley last Saturday would have stung.

Following a promising start to the season, the Tigers are now only a point clear of the relegation places and Preston Grasshoppers also enter this weekend in an identical situation. It was yet another late and narrow defeat for Paul Arnold’s side in Round Eight as they lost to Leicester Lions, however they once again secured a bonus point. The Hoppers have sealed 10 extra points already this term despite some frustrating losses, but Preston will be itching to turn these near misses into successes as soon as they can.

Only Hull Ionians, Huddersfield and Leicester Lions have won all three of their matches in October and while the first two sides are competing for promotion, the Lions have been rejuvenated after a torrid start to the campaign. Andy Key’s men lost their first five fixtures, but since the start of this month, they have really clicked into gear and they head to Macclesfield on Saturday oozing confidence.

Late Lions’ try catches Preston on the hop for a fine victoryhttps://t.co/qRge3KEwaK

Whilst Leicester are now out of the bottom three following their excellent recent form, Macclesfield are still struggling. They kicked off October with their first win of the season against Otley, but the Blues have been unable to build on their maiden victory and they are now 11 points from safety as things stand following successive defeats against Preston Grasshoppers and Wharfedale. Marshall Gadd’s side were able to recover from a difficult start to the season last year and the former National One outfit look as though they may have to turn things around once again.