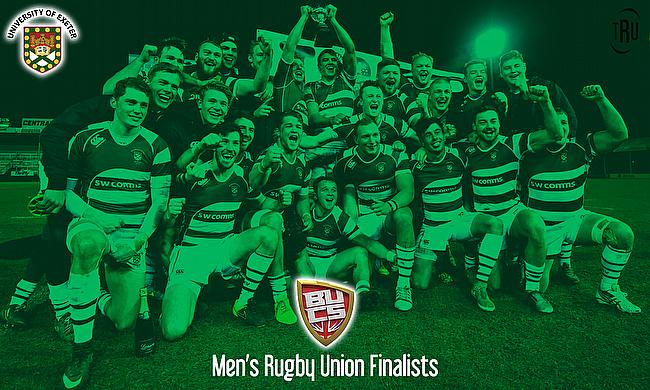 Ahead of the BUCS Championship trophy final on Wednesday at Twickenham, we will be profiling and previewing both Exeter and Loughborough as they prepare to battle for the biggest prize in University Rugby.

Here is our first preview of the week; starting with Premier South A champions the University of Exeter.

The University of Exeter compete in the Premier South A league and they won their respective division meaning we will have the top two sides in the country battling it out at England HQ on Wednesday. Exeter secured 11 wins from their 12 league fixtures this season to leave them top of the league table on 53 points – one point clear of second placed Hartpury College.

Like their opponents Loughborough, they are unbeaten this term with Exeter’s 16-16 draw against Hartpury being the only game where they have not tasted victory this campaign. In addition to this, I think it is fair to say that Exeter also breezed through the knockout stages to reach this year’s final.

A 39-5 win over Newcastle University in the quarter-finals and a 36-10 victory over Durham University in the last four has been Exeter’s route to Twickenham and this showdown with Loughborough will surely be their toughest test yet.

So, Exeter are into the Championship trophy final and they will be looking to end their long way wait for the title. Over the last couple of season’s they have been up against this evenings finalists, Loughborough, and have had contrasting fortunes. Last season, it was the Midlands side that won their most recent encounter 16-29 to reach last year’s final after Exeter had beaten Loughborough 50-31 in the quarter-finals of 2013.

Both Exeter and Loughborough head into this final having not lost a game over the last 12 months so something has got to give on Wednesday evening. Captain Sam Skinner has led by example this season for Exeter and has been supported by some superb displays from Paul Davies, Freddie Hosking, Harry Ledger, Oli Claxon, Sam Waiter and Alex Brown who have all recently been called into the England Students 30 man training squad. If those players along with the rest of the Exeter squad are on song on Wednesday night, then it could well be a league and cup double for the Premier South A winners.

Inside the Exeter camp:

Director of Rugby Keith Fleming: We have done well this season. We set ourselves standards right from the start of pre-season and we have built on those foundations and constantly improved where we need to.

"We have a great set of guys that are keen to work hard and like always, we are treating the final as another game and we are preparing well for Wednesday. I have said to the players that Twickenham is just another pitch with a few more seats around it! I am confident they can adapt and not let the occasion get to them.

"Loughborough have a lot of good players and the final will be a great advert for Student Rugby with it being the best two sides in the country going up against each other. It will be a tough challenge, but it would be testament to everyone’s hard work involved with Exeter Rugby if were to win the trophy on Wednesday.

Exeter’s Alex Brown: “It's been a really good season! Not only are we unbeaten, but it’s the way in which we have conceded so few points which is a real positive. Obviously, everyone is delighted to have made the final but we're not done yet, we're a special team and will put everything into winning the final.

Despite being a BUCS veteran it's my first time playing at Twickenham which is obviously very special. I'm proud to be 'bleeding green'. There's such a strong team ethos throughout the whole club and we're all really excited to put on a show for everyone involved with EURFC.”

Exeter 2nd XV Coach and Exeter Chiefs player Matt Jess: "Having being involved with the Uni for seven years now, it is great to see the 1st XV reach Twickenham. I think you can say they have been the best side across the leagues this season.

“Director of rugby Keith Fleming along with his staff have given the team real structure and given them the licence to go out there and play and they have expressed themselves well this season.

"Loughborough are a fantastic team. It will be a close game as both sides are unbeaten and I can’t see either side running away with it. But, it is all about being focused for the 80 minutes and more and if Exeter can do that, they will have a great chance of coming out on top and I do hope that is the case!”

Former Exeter University and Bath Rugby player Nick Morris: “One of the things which attracted me was the superb rugby programme run by Keith Fleming, the great facilities and the chance to go toe to toe with university rugby giants such as Hartpury College, UWIC and Durham.

“In my first year, we lost to Durham with the last play of the match, having led by four points into added time. Durham then went on to dominate Uni rugby for the next few years. We also lost narrowly in my third year at the semi-final stage so it's great to see the side make the final.

“I have followed from afar and they've looked phenomenal. They're free scoring and seem almost impossible to stop when they get momentum behind them.

“Some strong sides, such as Bath and Durham, have been ruthlessly swept aside with an all-court game. It bodes well for the final but Loughborough are historically the ultimate university rugby club and will be a tough test both physically and mentally. But, with Keith Fleming's coaching wisdom and the exceptional travelling support, they have a real opportunity to achieve something special.”