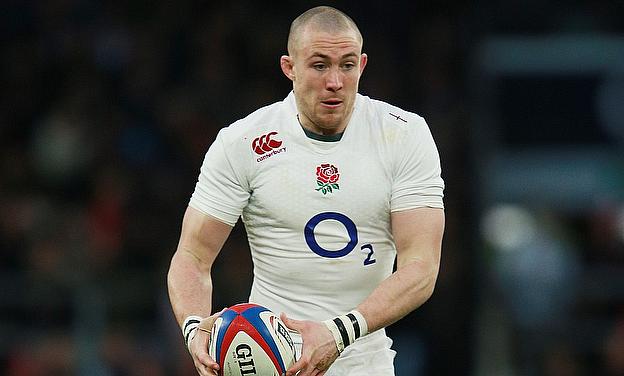 Mike Brown admitted he would adopt a "cautious" approach in recovering from his latest concussion setback.

The England full-back remains unsure when he will return after pulling out of Harlequins' Aviva Premiership clash with Saracens at Wembley last weekend.

Northampton wing George North has been advised by leading medics not to play again this season after suffering four quick-fire concussions, while Ireland's Johnny Sexton was stood down for 12 weeks earlier this term.

Brown is determined not to suffer an extended break - so will not rush himself back to action ahead of time.

"It was just after the France game, there wasn't one incident where I was dizzy or concussed, but after the game I just didn't feel quite right," said Brown.

"I had a headache the Sunday and Monday, so just being cautious with it, I don't want to get into the situation where you get a few knockouts or something.

"You don't want to be into a situation where you're out for a long time like Johnny Sexton or Geoff Parling or something like that.

"I think it's just ongoing to see how I am stage by stage.

"I'll just see how I am with the stages, do the 20-minute bike, see how I am after that and take it from there."

Brown was knocked out cold in England's 47-17 victory over Italy at Twickenham in the second round of RBS 6 Nations action in February.

The Harlequins flyer had hoped to recover in time to face Ireland in Dublin on March 1, but pulled out in the build-up.

Brown said increased awareness of the symptoms of concussion, driven by players undergoing World Rugby online modules, helped him realise he would not be ready to face Ireland.

"Learning about all the symptoms was massive," said Brown, speaking for Land Rover's 'We Deal In Real' campaign.

"I pulled out on the Tuesday before the Ireland game with the symptoms, and I could maybe have tried to carry on with training, but being aware of the symptoms was important.

"So just knowing the dangers of the long and short-term dangers, how important it is to be honest and how serious it can be, I think those are the main things I took from the online courses.

"After the France game I had a headache and could (have) easily thought 'it's Sarries, it's Wembley and I'll give it a go', but we're so clued up on it now that I don't think anyone would risk it.

"If I can do it, pulling out of England-Ireland, the biggest game of the Six Nations at that point, then I think anyone can do it, and should do it.

"Now I've been through it I would definitely talk to team-mates urging them not to play on if I thought they were showing symptoms.

"At the time you think it's a pain but now I'm very glad I took those online modules.

"It's just not worth pushing through."

Land Rover Ambassador Mike Brown was speaking at the launch of 'We Deal In Real', Land Rover's Rugby World Cup 2015 campaign that champions people at the heart and soul of the game by putting grassroots clubs on the global stage. www.landrover.com/rugby @LandRoverRugby #WeDealInReal