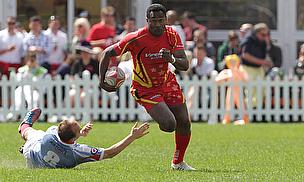 The Bournemouth 7s Festival 2013 recently celebrated its sixth Anniversary in style by producing undoubtedly its best event to date.

The Festival took place over the May Bank Holiday weekend and the ever-increasing demand for tickets to an event that is described as the Sporting Glastonbury resulted in the festival selling out for the first time in its history.

Over the festival weekend 20,000 sport enthusiasts and festival goers descended on a sun-basked Chapel Gate Sports Club to enjoy two days of enthralling sport and entertainment. Cementing its status as the world's largest sport and music festival, Bournemouth 7s proudly welcomed 320 teams and 4,500 players to cmopete in a range of rugby, netball, dodgeball and touch rugby Cups.

The Viper 10 National Cup, which took pride of place on the Main Festival pitch, was won by Templars 7s who produced smoe fantastic performances on their way to defeating Apache in front of several thousand spectators. Prior to this the final of the Viper 10 Ladies Cup saw the RFU Injured Players Foundation, which was made up of a selection of England 7s players defeat the Welsh National team in a truly classic Anglo-Welsh encounter!

Another big draw on the sporting side of the event was the newly established Dodgeball competition, which was further boosted by the presence of several rugby internationals playing in fancy dress including former England rugby captain Lewis Moody!

One of the biggest attractions of the weekend was the attendance of the British and Irish Lions Jamie Roberts and Alex Cuthbert. Both players took the chacne to attend this yaer's event the day before flying to Hong Kong to face the Barbarians as part of their preparation for the three-match Test series in Australia. These rugby stars enjoyed the festival weekend alongside fellow professionals such as England international Tom Varndell in the ALCATEL ONE TOUCH VIP Arena and V.VIP Celebrity Lounge.

If you were able to find a moment to draw your attention away for the sports cmopetitions there was some fantastic entertainment including the Animal WD-40 Action Sports Tour and the RAF parachute display team dropping onto the main Festival pitch which proved to be a fantastic spectacle for all those lucky enough to be surrounding the pitch below.

The Carlsberg Beer Tent once again returned as the main focal point of the festival situated centrally within the main Festival arena boasting what has been described as Europe's longest bar! However, the stand out feature of this year's Festival was the Viper 10 Festival stage, which was hosted by Cocoloco all weekend and welcomed the Cuban Brothers to perform live on the Sunday evening as part of their World Tour.

The return of Red Bull as the official energy drink sponsor was warmly welcomed by players who made use of the pitch side Red Bull Players Lounge, where they could sip on Red Bull to revitalise them between games.

Also taking pride position alongside the main pitch was the Viper 10 player's lounge, whic proved to be a huge draw to all teams at the festival! All of the Viper 10 teams at the Festival benefitted from the recovery drinks provided by SCI-MX nutrition in an exlusive pitch side viewing garden, this went down extremely well with the players and Viper 10 would like to thank SCI-MX Nutrition for providing these!

Diamond Sporting Group would like to extend a big thank you to all of the incredible sponsors that supported the Festival once again this year, without whose support the evvent simply would not be what it is today and we are proud to be associated with such renowned global brands.

Fresh from the success of a Sell Out 2013 Festival, the Diamond Sporting Group team have promptly started work on next year's festival which will take place on the final Bank Holiday Weekend in May, Friday 23rd, Saturday 24th and Suday 25th to ensure that the Festival is once again bigger and better than ever before as it firmly establishes itself on the UK Sport and Music Festival Calendars.