Stourbridge and Tynedale have a super September 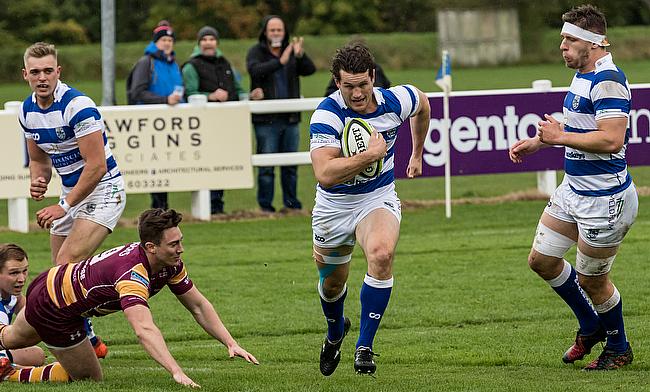 The top two in National Two North, Stourbridge and Tynedale, ended September exactly the same why they started the month as both sides secured victories.

Stour and Tyne have won all five of their matches so far this season and they remain out in front at this early stage of the campaign.

Hinckley now have a tiny bit of breathing space in third place thanks to an inspired Alex Salt performance, coupled together with Sale FC and South Leicester sharing the points on the weekend.

Down at the bottom, both Wharfedale and Leicester Lions are off the mark for the campaign as they beat Sheffield and Macclesfield, respectively while elsewhere, Luctonians sealed an excellent win against Blaydon and it was honours even between Otley and Huddersfield.

Stourbridge secured a fifth straight bonus-point win in National Two North, running in five tries to ease past Chester and stay top of the division.

Dan Rundle’s try put Stour ahead and the hosts built on that score as Ben Tibbetts, Chad Thorne, Afeafe Haisila all crossed, with Matt Crow going over for Chester.

The score remained at 29-5 until the final seven minutes of this encounter as Shaun Strudwick crossed for Chester, but Stour had the final say of the afternoon as Charlie Jeavons-Fellows crashed over from close range to complete a perfect month for Neil Mitchell’s side.

Tynedale made it five wins on the bounce thanks to a clinical display against Sedgley Park.

Matt Bebbington’s side crossed on four occasions to secure a bonus point, but this was Sedge’s second away defeat on the spin.

Alex Salt scored a hat-trick as Hinckley ran in seven tries in a thrashing of Sheffield Tigers at Leicester Road.

The No.8 completed his trio of tries inside 29 first-half minutes as Hinckley were rampant against their opposition.

Callum Darcey and Ben Avent crossed in the second period, while Jamie Skerrit completed the rout late on for the home side.

The Tigers’ only response came from Henri Packard on a tough afternoon for the Yorkshire outfit, who have now shipped 108 points in their last two away matches.

South Leicester snatched a draw at home to Sale FC thanks to a much improved second-half performance.

The away side led 17-0 after completely controlling the first half, but they let their opponents back into the game after the break.

Despite South dotting down on just one occasion, they once again had the boot of Rickie Aley to thank as he guided them to an unlikely share of the points.

Four penalties from Louis Silver and a try by Adam Knight gave Luctonians a hard-fought win over Blaydon at Mortimer Park.

Silver struck two of his penalties in the first half to give Lucts a 6-0 lead and it was Blaydon’s indiscipline which allowed the hosts to extend their advantage after the interval.

Once again, Silver slotted over two more from the tee, but Blaydon hauled themselves back into this contest on 75 minutes as Nathan Bailey crashed over.

However, any nerves that may have been amongst the Mortimer Park faithful were dispelled when Adam Knight crossed late on to seal a third win of the season for Ryan Watkins’ side.

Huddersfield missed the chance to secure successive victories as Otley fought back to earn a draw at Cross Green.

Austen Thompson’s try and five points from the boot of Jonny West gave ‘Field a 10-3 half-time lead, with Joe Rowntree pinging over a penalty for the hosts.

West stretched Huddersfield’s lead with another penalty after the break, but Grayson Maguire rumbled over to leave Otley three points adrift of their visitors.

It didn’t take long for the home side to level things up as Rowntree slotted over a penalty, but Huddersfield went back on the attack and Lewis Workman powered over to allow West to kick the conversion.

However, there was to be one final twist in this Yorkshire derby as Mike Coady dotted down on 75 minutes for a converted score to snatch a share of the spoils.

Leicester Lions secured their first win of the season as they beat 14-man Macclesfield at Priory Park.

Rhodri Mayor got Macc off to the perfect start in Cheshire, but tries from Devon Constant and Liam Hills put the visitors in front.

David Marwick then restored the Blues’ lead, but the key moment in the game occurred just before the break. Jonathan Boden slotted over a penalty before Sam Moss was shown a red-card for a head-butt.

But despite the man advantage, the Lions couldn’t take the game away from Macc until the 74th minute when James Morgan and Oliver Taylor both dotted down to bring an end to an ill-tempered National Two North clash.

Wharfedale ended their winless start to the season thanks to a gutsy victory over Sheffield at the Avenue.

A try from Robbie Davidson and nine points from the boot of Tom Barrett helped the visitors into a 14-5 lead by half-time.

Stephen Depledge crossed for Sheffield in the first period and the hosts clawed themselves back into this contest with a Rupert Broadley try immediately after the break.

Sheffield were made to rue two missed penalty chances as Barrett slotted over another three points on 76 minutes to seal a much needed win for Dale.