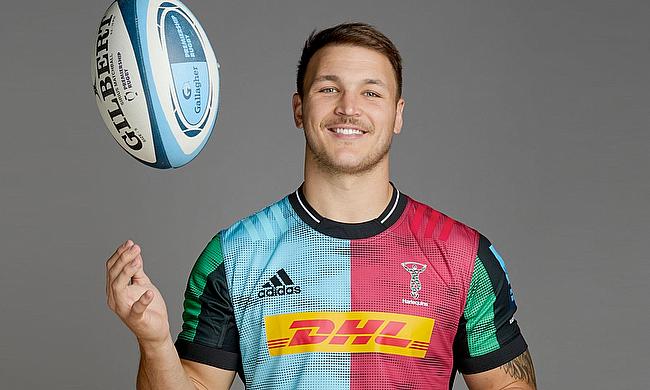 Harlequins centre André Esterhuizen was today described as a "titanic player in the prime of his career" as he was named Gallagher Player of the Month for January.

The Springboks star affectionately known as André the Giant made an impressive impact on Gallagher Premiership Rugby last month according to BT Sport pundit and Gallagher ambassador, Ugo Monye.

Monye said: "He can do everything, quite simply. We often focus on the obvious things. Ball carrying, brilliant. Defending, great. Work at the breakdown and work off the ball is exceptional.

“He possesses all the core attributes you would want of a highly skilled and destructive centre. He’s got a brilliant left boot. He kicked for goal earlier in the season against Wasps so he’s got that in his locker and he’s got a passing range that most centres would be envious of. Harlequins are really fortunate to have him in their team and to have him sign for another few years.

“Although these are hotly contested every month, I think when you win three back-to-back player of the match awards, it’s almost a rite of passage. He’s been exceptional and also so pivotal to not only how Harlequins play but also how they’ve won their matches during that period.

“Whether it’s last gasp tries against last year’s beaten finalists Exeter Chiefs a few weeks ago, to the performance he put in in the Big Game, he’s just been outstanding.”

Harlequins continue their battle for a top-four spot this month and Monye believes that Esterhuizen will be crucial in their quest for a place in the Gallagher Premiership Rugby semi-finals.

Monye adds: "This Six Nations period is a time when squads get tested and Esterhuizen is an international in the prime of his career. To be able to have someone like him, a consistent performer, is really significant. He is a titanic player and not just in stature, that will aid Harlequins to position themselves by the end of this international window to go on a run similar to the one they made last year which will hopefully enable them to qualify for the top four.”

Michael Rea, CEO of Gallagher’s UK Retail division, said: “It’s fantastic to see André voted Player of the Month for January in Gallagher Premiership Rugby. He’s a huge talent at the club, giving his all in every match.

“Undoubtedly, André has been playing some of his very best rugby in recent months, with outstanding performances drawing widespread post-match praise and earning him three man of the match accolades in a row. Combining power with sharp passing and disruptive defence, he has created a number of showstopper moments for fans at the Stoop this season. Congratulations André – a very worthy winner.”

As part of his prize for being named Gallagher Player of the Month, Esterhuizen wins a shirt signed by the whole Harlequins squad and framed by Gallagher to gift to a charity of his choice, to help them raise funds for their chosen cause.

Esterhuizen was judged by a panel of experts as the player who made the biggest impact in Gallagher Premiership Rugby in January 2022.

Esterhuizen was voted for by a panel of media professionals based on his performances in January 2022, alongside a public poll on the Premiership Rugby app, which drew more than 500 votes.