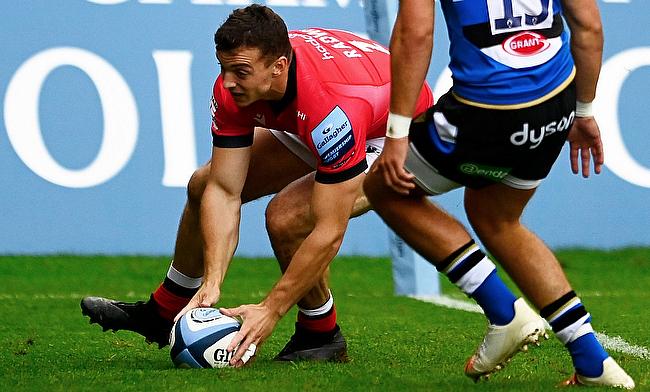 Newcastle Falcons wing Adam Radwan has started the 2021-22 Gallagher Premiership Rugby season in style, today being named as the first Gallagher Player of the Month for the new campaign.

Monye said: "Adam is such a threat with the ball and an incredibly exciting player. It’s just great to see his form for Newcastle Falcons and the continuation of his growth as a player.

"As a coach, and as one of his teammates, the confidence which he exudes means you want to get the ball to him all time. It becomes this self-fulfilling prophecy because he’s playing so well with so much confidence. He looks like a threat, whether it’s breaking tackles, beating players or scoring tries. His defence has been great too and I’ve been impressed by him.

"As a back three player you look for X-Factor and he has it. At the moment, Adam's backing himself. You can have all the raw talent and ability, but if you’re not backing yourself you are underplaying your talent. He’s flying at the moment, and if he continues playing as well as he is now, anything’s possible and achievable for him."

Monye added: "Adam's started the season in the same way he finished last season. His last game was for England where he scored a hat trick against Canada and he’s just been electric.

"Yes, he’s been on the scene for a couple of years but I feel as though his rise over the last couple of months has been extraordinary and his potential is frightening. I think he’s the quickest player in Gallagher Premiership Rugby."

Although ongoing Covid-19 restrictions prevented a physical presentation of his award, Falcons’ fan, club liaison and sales director for Gallagher in Newcastle, Andrew Morton, said: "Adam Radwan has started this season in superb form - he’s not called the ‘Flying Falcon’ for nothing. His on-pitch acceleration and attacking play have already created showstopper moments for all the supporters relishing their return to Kingston Park.

"Adam responds to the atmosphere and pressure of fan-filled stadiums with electrifying effect. He’s a tremendous home-grown talent here in the North-East and we couldn’t have a more worthy winner. For local businesses like ours, it’s also brilliant to be back in the stands with clients and colleagues, playing a full part in the rugby community once again."

Radwan – as part of his prize for being named Gallagher Player of the Month – wins a shirt signed by the whole Newcastle Falcons squad and framed by Gallagher to gift to a charity of his choice, to help them raise funds for their cause.

Radwan was judged by a panel of experts as the player who made the biggest impact in Gallagher Premiership Rugby in September 2021.

He was involved in a four-way battle to win the award eventually beating Nic Dolly, George Furbank and Freddie Steward to the prestigious prize.