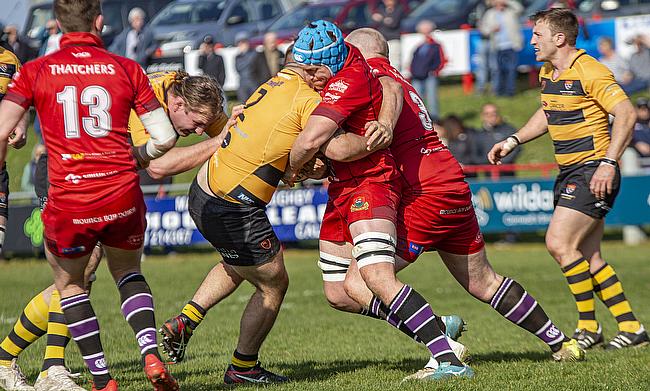 Brian Ashton Interview: “The National Leagues continue to promote the characteristics of rugby
Blackheath dent Park's promotion push, Hull overcome latest hurdle and Hinckley topple another title candidate
Hull and Sedgley Park the headline act as National Leagues return for run-in
History made in National One, Sedge do all they can and Esher snatch victory to go top

Strap yourselves in. The next month in levels three and four will be a cocktail of elation, drama and despair as the bell rings to signify the final lap of a brilliant campaign with a top of the table clash in National One kicking things off.

Following last week’s results in National One, Caldy’s bid to create history and gain promotion to the Championship might have been enhanced after Rosslyn Park fell to a defeat against Blackheath, but after stringing together 13 straight wins and having lost just one of their last 22 matches, the league leaders have every reason to be confident when they travel to their title rivals this weekend.

Looking at this mouth-watering clash cynically, Rosslyn Park will stay behind Caldy regardless of the outcome in the capital but Kieran Power’s men will of course be looking at the bigger picture. The second-placed side have lost four of their last seven games which has seen them lose their grip on this promotion battle and they are now five points behind the league leaders. However, they still have a game in hand and interestingly, they were the last side to beat Caldy back in November.

This is the top of the table meeting we have all been waiting for. This is what National League Rugby is all about.

Keeping an eye on proceedings at The Rock will be both Sale FC (3rd) and Cambridge (4th). The North West outfit have won eight on the spin and sit eight points behind Caldy with a game in hand. Johnathan Keep’s men still have to play the table-toppers as well, but before they look too far ahead, they have to overcome the challenge of a Cinderford side who are ending the season strongly.

?? This weekend's National League Rugby Review Show will be on point!

We also have action from the #Nat1 relegation battle + the #Nat2n & #Nat2s title races!

As for Cambridge, one defeat from their last 12 has kept the Blood and Sand on the periphery of the promotion race and Richie Williams’ side begin April by travelling to relegation-threatened Leeds Tykes.

Coincidently, Jon Callard’s charges did beat Cambridge in the reverse fixture in November and a repeat of that success could prove to be a huge result in their bid to avoid the drop. As it stands, the men from Yorkshire are four points from safety with a game in hand and after this weekend, they play three of the teams around them in the table. To kick off the month on the front foot would be the ideal start to a crucial period for the Tykes.

They will also be keeping tabs on the outcome at Brickfields when rivals Plymouth Albion welcome bottom of the table Tonbridge Juddians to Devon. Albion are the team directly above Leeds in the standings and they will be keen to arrest a run of four successive defeats if they are to boost their chances of survival.

If they were to clinch a sixth home victory of the season, it would confirm TJs’ relegation from National One. Peter Dankert’s men have secured just three wins all term but one of those triumphs did come at The Slade against Saturday’s opponents. Can they live to fight another day?

Blackheath created some much-needed breathing space between themselves and the relegation scrap after beating Rosslyn Park in Round 25 and James Shanahan’s boys will be hoping to take another step towards safety when they visit Bishop’s Stortford this weekend whilst Rams RFC host Birmingham Moseley and Chinnor travel to Taunton Titans.

Hull may still be reluctant to mention the word ‘promotion’ within their own circles, but as they travel up to Birmingham, they will know deep down that they are edging ever closer to creating history. Gary Pearce’s side look simply unstoppable at the moment and their battling victory over fellow title contenders Sedgley Park in Round 25 stretched their winning streak to 15 matches but also signified a huge statement of intent.

This weekend, the Yorkshire outfit have a good chance of continuing their quest towards National One when they visit Bournville - who they beat 50-22 at the start of February - given the Midlands side have picked up just one victory in their last 10 matches. Looking at the wider picture, the Chocos seem to have enjoyed their maiden campaign at this level and they will be keen to end the season positively, especially in front of former France and All Blacks coach Dave Ellis who this week was announced as the club’s Director of Coaching for the final six matches.

With Sedgley Park falling to a defeat against Hull last time out, Rotherham Titans are now the nearest challengers to the league leaders.

“We’ve been in with a chance of winning every game we have played. The commitment we are getting from the lads, I just don't see us dropping off.”

Adam Byron’s men have won seven of their last eight fixtures which leaves them six points off the summit. On paper, the Titans seemingly have a more favourable run-in than Hull but any hopes of swooping in to snatch the title off their Yorkshire rivals will be dashed if they are unable to get their job done against Loughborough Students this weekend.

In terms of Sedge, Director of Rugby Scott Barrow delivered a rallying cry this week saying his side “won’t drop off” between now and the end of the term. The Tigers are nine points behind Hull and will be looking to return to winning ways at the first attempt when they entertain Chester in Round 26.

Redruth remain right on the coattails of league leaders Esher after an excellent victory over Canterbury in Round 25, and the win keeps them three points behind the table-toppers heading into the final month of a gripping National Two South title race.

The Reds have lost just one of their last 10 games which is clearly the reason why they are still right in the mix for a spot in National One, but that sole defeat did come on the road against one of their fellow promotion contenders in the form of Esher.

So the task for Nigel Hambly’s men is to avoid a repeat of that this weekend when they travel to fourth-placed Worthing Raiders. Two weeks ago, the Sussex outfit had the chance to move to the top of the division but defeats to Esher and then Hinckley has left the Raiders six points off the summit.

However, it is far from over for Worthing given they still have to play the league leaders again between now and the end of April, but that fixture will only potentially become season-defining if they can do the double over Redruth.

In terms of Esher then, they moved on to 102 points for the season following their hard-fought win over Old Albanian in Round 25 and the latest assignment in The Eees’ promotion bid sees them travel to Guernsey Raiders whilst Clifton (3rd) - fresh from their victory against Bury St Edmunds - visit Canterbury.

Outside of the title race, Henley Hawks take on an in-form Dings Crusaders and Leicester Lions will be looking to maintain their brilliant home record when Old Albanian arrive in the Midlands.

Elsewhere, Jacob Ford faces his former club when Westcliff come up against his current side Bury St Edmunds, Barnes go to Barnstaple whilst Hinckley and Rochford Hundred will both be keen to back up the excellent results they achieved in Round 25 when they meet at The Rugby Park.

Subscribe to The National League Rugby Review Show to watch the run-in to an enthralling campaign...