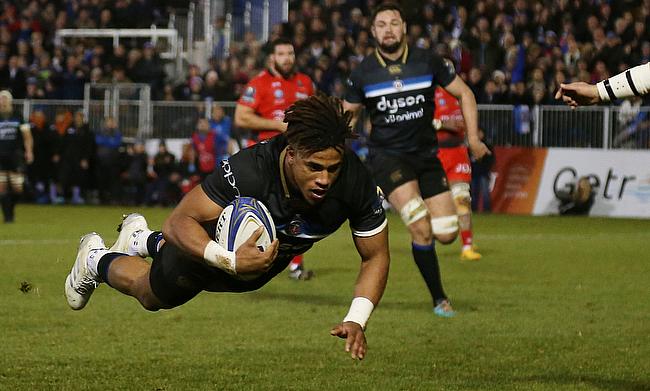 Anthony Watson scored a double as Bath went on to claim the top position in Pool 5 of the European Champions Cup with a 26-21 win over Toulon at Recreation Ground on Saturday.

Impressive work from wing Aled Brew set up Bath's first try in just 48 seconds following the kick-off as Beno Obano went past the line and Rhys Priestland kicked a conversion and backed it up with two more penalties to make it 13-0.

Bath maintained pressure on Toulon, who were unable to get off from their own half and when they did Brew performed a brilliant tackle to deny Francois Trinh-Duc a try and finally in the 17th minute, the visitors scored their first point through a touchdown from Alby Mathewson that was converted.

But then it was time for the Watson wondershow, first of all when he outstripped Toulon's defence after his England colleague Jonathan Joseph freed him in space, and then with a virtuoso second touchdown.

A double penalty from Trinh-Duc brought down the gap between the two teams to 18-13 but Watson's second try at the stroke of half time increased Bath's lead to 10 points.

Toulon knew they had to score first after half-time, and it took them barely two minutes to deliver as their New Zealand World Cup-winning centre Ma'a Nonu made headway, found wing Chris Ashton in support, then hooker Guilhem Guirado gave a scoring pass to Samu Manoa.

The visitors had a chance to level the scores but Trinh-Duc missed a conversion and penalty in quick succession as Bath maintained the 23-18 lead.

Priestland kicked his third penalty to increase Bath's lead to eight points and Bath thought they had tightened their grip on the contest just a minute later when number eight Paul Grant's inside ball sent substitute Jack Wilson sprinting to the line. However, it was disallowed for a forward pass following lengthy discussion between referee Nigel Owens and television match official Neil Hennessy.

It was an agonising moment for Bath - and a highly-debatable decision - but they kept their nerve to hold on and claim a priceless victory after late Toulon pressure.