Wasps state their intent against Northampton 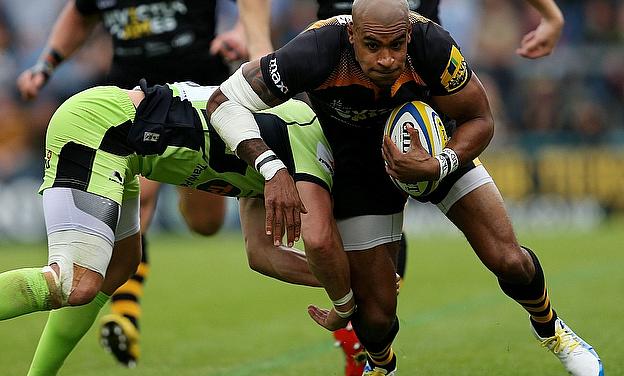 Northampton's devastating start to their Aviva Premiership title defence is now a distant memory after they crashed to a 20-16 defeat against Wasps at Adams Park.

As an otherwise dull contest entered its final quarter, Saints' 9-3 lead built on three penalties from Stephen Myler was transformed into a 17-9 deficit.

Tries from flanker Ashley Johnson and wing Tom Varndell in two minutes placed Wasps in a commanding position in a match where every point was a battleground.

Full-back Ben Foden crossed with two minutes remaining to salvage a bonus point as a late surge from Saints was repelled.

For Northampton it was an almighty comedown after the reigning champions had routed Gloucester 53-6 nine days ago, scoring eight tries in the process.

They failed to capitalise on a glut of possession and were devoid of ideas with gamebreakers such as George North and Luther Burrell barely involved.

Wasps, who saw Andy Goode, Ruaridh Jackson and Rob Miller contribute points from the kicking tee, were worthy winners and will draw enormous confidence from the result.

It was a hard watch at times, most noticeably in a grim first half that began with Myler and Goode exchanging penalties.

Northampton had spent most of the opening quarter trying to breach a robust home defence but while they had plenty of ball, the gaps were not appearing.

Goode was marginally wide with a long-range penalty and a half that was passing without event produced fireworks at a 30th-minute line-out.

Johnson took out Alex Corbisiero and as the two lay on the floor the England loosehead threw a punch. After consulting the TMO, referee Luke Pearce issued yellow cards to both players.

The pressure should have increased on the home whitewash when Saints won a five-metre scrum, but Wasps responded by forcing the penalty.

On the next phase of play Wasps attacked with purpose for the first time, James Haskell, Varndell and Nathan Hughes making yards until full-back Andrea Masi was penalised for holding on to the ball.

Any excitement quickly subsided as the match continued its uneventful path.

With the score so tight points were at a premium, so Northampton must have cursed when Myler struck the right upright with a very kickable penalty.

North had to wait until the 49th minute for his first touch of the ball, but the TMO intervened to deny him a try for being in front of Ken Pisi when the wing chipped ahead.

Successive penalties from Myler appeared to give Saints some breathing space but that lasted only until Wasps plundered two quickfire tries.

The first came when Johnson picked off Burrell's pass intended for North and won the race to the right corner.

Before they had the chance to compose themselves Saints conceded a second after a piece of magic from Varndell.

Wasps worked the ball to their left wing and with little space to exploit he chipped ahead, gathered the kick and dived over.

Replacement fly-half Jackson landed both conversions, but then had to be helped from the pitch with what appeared to be a significant injury.

But Miller picked up where Jackson left off by landing a penalty that swept Wasps out of reach with Ben Foden's late try proving too little, too late.