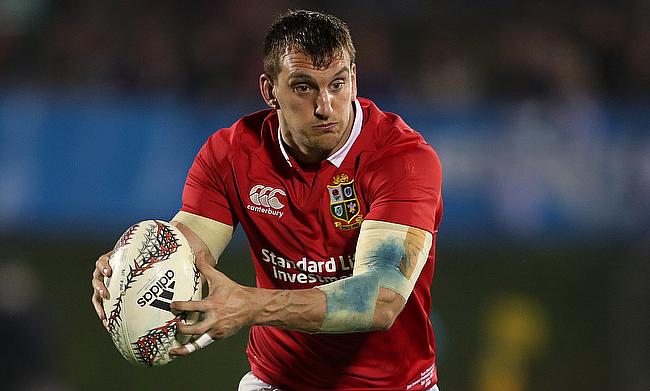 New Zealand back-row Jerome Kaino stated that British and Irish Lions skipper Sam Warburton can bring a "huge lift of intensity" to the visitors, if he is named in the starting line-up.

The former Wales skipper was among the replacements in the first Test against All Blacks at Eden Park and made his first appearance in the 53rd minute when he replaced Peter O'Mahony.

However, he is set to return to the line-up in Wellington on Saturday as Lions face a must win game against Steve Hansen's men in order to remain alive in the series.

"Sam is a great leader," All Blacks flanker Kaino said.

"I don't think they lose anything having Sam in there.

"We are expecting a huge lift of intensity at the breakdown if they bring Sam in. If anything, they get stronger having him there."

Warren Gatland's men will have a daunting task to bounce back from their 30-15 defeat in the first game in Auckland as they have managed to claim the series only two times previously in 1899 and 1989 after losing the opening game.

However, the 34-year-old was reluctant to write-off the visitors despite their demoralising defeat at Eden Park.

"For us, it's looking at how we can improve.

"I know for a fact down the road (in Wellington), their (Lions') team meetings and training will have a lot of edge and a lot of emotion.

"I don't think it is smart for us to sit back and expect it to happen.

"We need to make sure we turn the screws a lot more in our training and expect a backlash from the Lions at the weekend."

"He definitely does it his own way.

"They (Read and McCaw) are two very different people who use very different methods, but remarkably achieve the same sort of result in a roundabout way.

"Reado was a large part of the leadership when Richie was here, so it's not like that part of it was new to him.

"In a normal All Black career, he probably would have been an All Black captain a lot earlier. He came into it late in his career in terms of games.

"He just has a calmness about him and he has a great ability to work with the younger players and make them feel included and empowered.

"I think we saw that at the weekend with (wing) Rieko Ioane, who comes in for his first Test start in a massive Test - I guess we got questioned a little bit on that - but Rieko just felt confident in that environment to go and be who he needs to be."