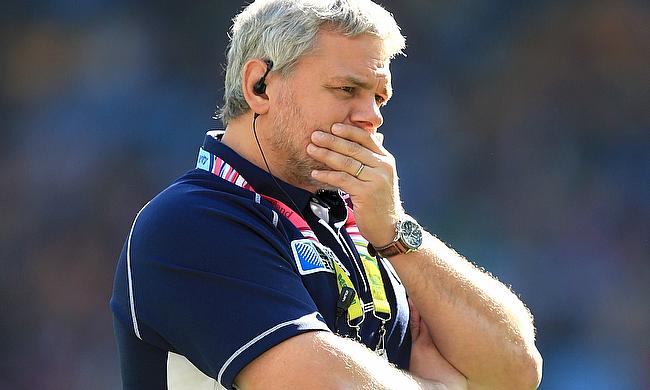 Lemoine had scored Uruguay's most recent tournament try, against England in Brisbane in 2003, prior to hooker Carlos Arboleya and scrum-half Agustin Ormaechea touching down in a 47-15 loss to Fiji in Milton Keynes.

Fiji's win means England, whose group stage exit was confirmed by last Saturday's loss to Australia, finish third in Pool A, qualifying for the 2019 tournament ahead of this weekend's clash with Uruguay.

"I was really happy, because our team deserved a try. We have two today," said Lemoine, whose players now have a short turnaround before the England contest.

"Against England the first thing is to try to recover the players. We play in three days.

"We're still trying to score tries. We're not coming here to play defensive rugby. We'll try to score, to have the ball and we'll try to make a really tough game on Saturday."

Ormaechea had an eventful evening. The scrum-half was sent off for two yellow cards and awarded the official man of the match.

Lemoine is uncertain if Ormaechea will be suspended for the England match after becoming the first player to be sent off at the 2015 tournament.

But he felt aggrieved with the second yellow card, which resulted in red, when Ormaechea had a scuffle with Fiji prop Campese Ma'afu after Kini Murimurivalu's score.

"I think it's something not really important. It was something really small," he said.

"We will talk with the judicial official (and) I have to talk with our lawyer."

Fiji had too much pace and power for their amateur opponents.

Nadolo finished with a 17-point haul in front of a record stadium attendance of 30,048.

Fiji lost to England in the opening game - one of three games in 13 days, with defeats to Australia and Wales following - before signing off from the tournament with a deserved win.

Head coach John McKee said: "It was massively important (to finish with a win).

"We had some huge challenges around the first three games. We believed we could roll over one or two of the big teams. It didn't happen.

"It was really important to have some consolation and finish on a positive note."

Fiji will now finish fourth and have to qualify for the next World Cup in Japan.

"We can control a lot of things, but we can't control the draw. Hopefully the draw is a bit kinder to us next time," McKee added.

McKee's work with Fiji has attracted admirers and rumours of a move to Japan or France was put to the New Zealander on Tuesday night.

"There's been some media speculation, but I'm committed to Fiji rugby," he added.