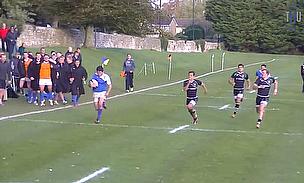 Watch highlights of some of the latest university rugby action as Bath University beat Exeter University 38-27 in the BUCS Premier South A 2013-14 competition.

An injury early in the first half to Exeter's Henry Waltier appeared to put Exeter off their game. The injury was very serious and halted the game for nearly 30 minutes with coaches, players and supporters looking on anxiously .

It is important to report how quickly both sets of players, the referee and Bath Coach responded to the incident. During the enforced break we watched Bath 3’s take on Bath 4’s in a no holds, bone crunching encounter. After the injury delay it was Bath who started most effectively; it did seem as if the Exeter players were concerned about their team-mate. The game resumed with the score at 3:3

The action was in the Bath 22, with Exeter looking to score with a two-man overlap. Bath’s right wing, George Drury, elected to go for the intercept. It was a brave decision but it paid off and the player ran the length of the field to score a try and then promptly kicked the conversion from a difficult position. Still finding it difficult to get their focus back the Exeter team were to concede two further tries each scored by Bath lock, Olli Parkinson.

We were learning that Bath have a very strong second row combination that powers the scrum, dominates the line out and are able to provide forward momentum. These two will be crucial if Bath are to win the BUCS Premier A South.

The second half saw Exeter come out firing with the wind more at their back. The Exeter players attempted to use fast ball through hands to keep away from the Bath forwards and it proved effective producing tries.

The momentum looked to be Exeter’s but in between the Exeter tries it was that man George Drury who stole away for another try and another conversion.

The onlooking England Student selectors will have put stars against Bath’s 4, 5 and 14.