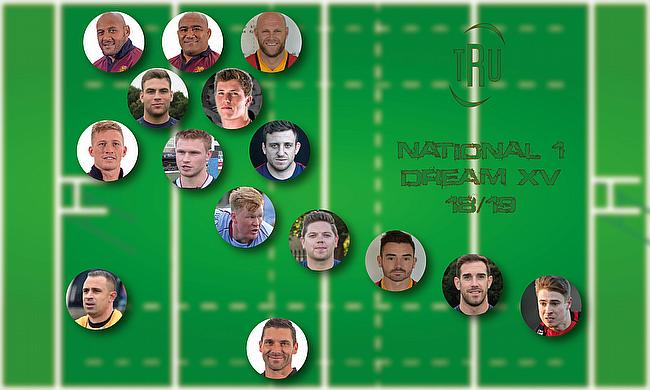 The 2018/19 National One season concluded at the end of April and what a brilliant campaign it was.

Ampthill & Distrcit and Old Elthamians made sure the title race went right down to the wire and unsuprisngly, seven players from across the top two sides have been named in TRU’s Team of the Season.

From Ampthill, the experienced James Pricthard was able to guide his side into the Championship from the tee whilst up front, the likes of Soane Tonga’uiha, Aleki Lutui and Joe Bercis were immense throughout the campaign.

OEs have three representatives in our squad, but it quite easily could have been more. Centre James Golledge chipped in with nine tries and Tom White was deadly with the boot.

Fred Hosking led by example in the second-row and he partners Loughborough Students’ Thibaud Flament, who was also nominated by his club for the NCA Top 48.

Rosslyn Park, who finished third in National One this term, have Arthur Ellis in the team while Blackheath’s Jake Lloyd was one of the first names included after a wonderful try-scoring season for James Shanahan’s side.

Lloyd’s exploits were only bettered by Roterham Titans’ Seb Nagle Taylor, who dotted down on 21 occassions for the Yorkshire club, and leading try scorer Craig Holland who was simply outstanding for Chinnor in their maiden National One campaign.

The aformentioned Nagle-Taylor is joined by Titans scrum-half Alex Dolly in our team whilst Cinderford have two represensatives as centre Sam Smith and front-row George Porter make the cut.

Below is our Team of the Season plus, we highlight some of the other players who have performed well this term.