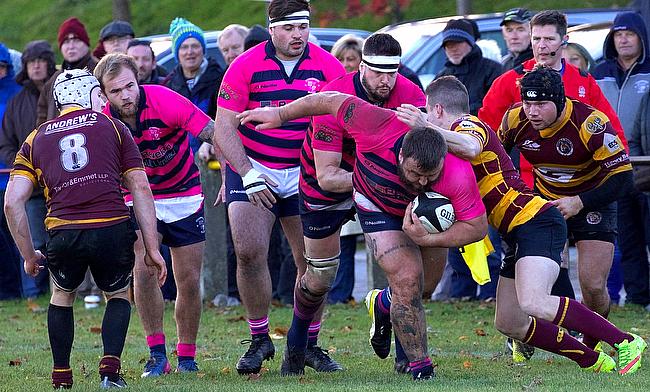 Stourbridge suffered their first defeat of the season in National Two North as they were narrowly beaten by Sheffield Tigers in Yorkshire.

The Midlands club were going for a 10th straight win of the campaign, but the Tigers produced a superb first half display to end Stour’s perfect start to the term.

With Neil Mitchell’s men losing, the teams below them capitalise. Tynedale, Hinckley, Sedgley Park, Sale FC and South Leicester all won, with Leicester Lions and Huddersfield capping off a solid weekend for eight of the top nine sides in the division.

Sheffield Tigers won a thrilling contest at Dore Moor as they inflicted a first defeat of the season on league leaders Stourbridge.

Stour had arrived in Yorkshire aiming for a 10th successive victory as they looked to cement their place at the summit, but the Tigers had other ideas.

The home side tool a 14-7 lead with Alex Graham and Frank Wagg going over either side of a Dan Rundle score.

Mark Ireland dispatched two penalties before the break, but the match became increasingly tense after the interval.

Stour, trailing 20-7, set the platform for a comeback as Nick Murphy burst over to score.

However, despite both sides fashioning chances, the Tigers held on to their six point advantage to clinch their fourth win in a row and leave Stour with the unfamiliar taste of defeat.

Tynedale responded from two successive defeats in National One by running in seven tries to pull away from a spirited Sheffield.

Three tries in four second half minutes was the turning point in this match as Scott Lawson’s side overcame a battling first period to take control and move to within seven points of league leaders Stourbridge.

Will Miller’s try was the pick of the scores in the first 40 and his fellow back James Spencer accelerated over after two Stephen Depledge penalties for Sheffield.

The visitors were just a point behind at the break as Rupert Broadley dotted down, but scores from Oli Walker, Rob Parker and Ash Smith took the game after from Sheffield after the restart.

Further tries from Ben Bell and Richie Elliot reflected Tyne’s second half dominance as they sealed a welcome victory.

Hinckley maintained their impressive start to the season with another routine bonus-point win over Macclesfield.

The Midlands side did fall behind in this contest, but they were then dominant as they secured their sixth straight victory at Leicester Road.

Fly-half Joe Wilson was on target six times for Hinckley who remain level on points with Tynedale.

Sedgley Park notched seven tries as they held off bottom of the table Wharfdale in a thrilling contest at Park Lane.

Dale showed their intent as two penalties from Tom Barrett helped them into a 6-5 lead after a positive start by the visitors.

But after Dan Maher’s earlier effort, Mark Goodman and Stephen Collins scored Sedge tries to put them 19-9 up at the break.

Sale FC kept up their challenge for a top two spot with a bonus-point win over Luctonians.

Matthew Bradley and Adam Aigbokhae scored touchdowns after the break, with Jake Barron completing the rout at Heywood Road.

Luctonians’ only score came right at the death through replacement Jordan Street.

South Leicester fought back twice to claim a bonus-point win over Otley at Welford Road after a thrilling contest.

South fell behind after Adam Shaw’s try was cancelled out by a Joe Rowntree penalty and a score from Mike Coady.

History repeated itself later in the first period as Ben Steele’s score wiped out Myles Bean’s effort to give Otley a 15-14 lead.

However, two Rickie Aley penalties and tries from Corey Venus and Reece Harris gave the hosts a half-time lead, with Ben Steele and Brett Mitchell keeping Otley in touch.

Aley landed a penalty after the break, but the visitors cut South’s lead once again as they were awarded a penalty try.

But, Bean’s second try put South back in control and despite Declan Jackson crossing on debut for Otley, the away side couldn’t muster up another response as the hosts claimed victory.

Leicester Lions secured their fifth victory in their last six matches thanks to a win over Chester at Westleigh Park.

Jack Heald’s side ran in five tries on their way to a second home win of the campaign with Jon Boden hitting a personal total of 2000 points in his Leicester Lions career.

It is a victory which leaves the Lions seventh in the table, while this was yet another away defeat for Chester.

The Cheshire side have won just once on their travels this term and their woes on the road continued in Round 10.

Huddersfield produced a clinical display as they secured a deserved win against Blaydon at Lockwood Park.

A penalty try followed by scores from Dickie Piper and Joel Hinchliffe put Field 27-7 up at the break.

Scores via Adam Malthouse and Brendon Conway as well as another penalty try were added to Huddersfield’s tally after the restart, to give them a 41-point lead.

However, Blaydon then seemed to spark into life. Cameron Bell added to Tom Gorman’s first half score before Rob Lenderyou and Keith Laughlin went over to secure a bonus-point for Ally Hogg’s men, but the damage had already been done.