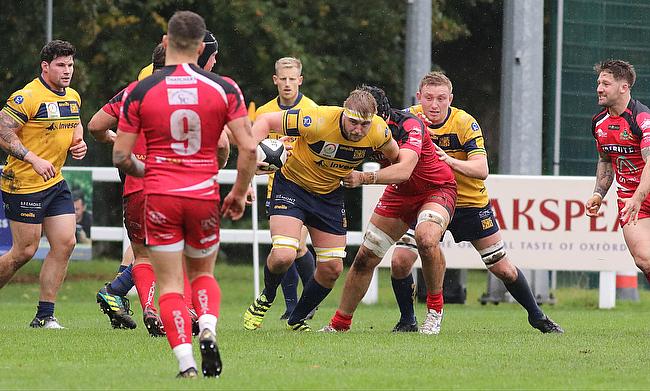 This National League season refuses to be dull. All three divisions continue to write their own headlines and as the final stretch moves into vision, there is still a lot to play for.

In National One, the title race has been the main focus for the last few weeks and the top three will be hoping to keep their promotion dreams alive in Round 20, with league leaders Richmond hosting Bishop’s Stortford, whilst Rosslyn Park face a tricky trip to Plymouth Albion and Rams RFC take on Hull Ionians.

Yet again in National Two North, the spotlight is on the fight for survival as Huddersfield lock horns with Preston Grasshoppers and the outcome of that fixture could have huge ramifications towards the bottom.

As for National Two South, there are two crucial games at either end of the table with first-place Henley Hawks travelling to an in-form Redruth whilst Westcliff and Bournemouth meet at The Gables, with both clubs fighting to secure their status in the league.

Below is a more in-depth look at the action as January draws to a conclusion:

Richmond’s narrow victory against Rams RFC last week saw them move from the back of the National One title race and into the driving seat once again. Steve Hill’s men battled hard to a 22-17 win over their promotion rivals and it leaves Richmond two points clear at the summit heading into the final weekend of January.

It remains tight at the top so Hill’s side will now want to keep their focus after securing a potentially vital victory last time out. The team from the capital host Bishop’s Stortford this week and the visitors to the Athletic Ground will be keen to end the month exactly how they kicked off the New Year – with a victory. Andy Long’s men have suffered successive defeats in recent weeks against Darlington Mowden Park and Chinnor, respectively, so to topple the league leaders would the perfect way to get back on the horse.

Rosslyn Park are once again on the coattails of Richmond after a resounding 40-21 win over Sale FC last time out. Granted, Kieran Power’s side have never really let their local rivals out of their sights for the bulk of the campaign but losing to Blackheath in Round 18 was a setback for Park.

However, they responded in style and they will want to keep the pressure on the league leaders when they visit Plymouth Albion. A trip to Brickfields is never easy and the way James Scaysbrook’s side have begun 2020 makes the task of gaining a positive result in Devon even tougher. Albion have won all three of their matches in January, which remarkably is their best run of form for just under a year. They have also beaten Richmond this term so there is no doubt they will provide a stern test for Rosslyn Park on Saturday.

Prior to last weekend, Rams RFC had not lost a fixture since the middle of November but their excellent run came to end in Round 19. Seb Reynolds’ side have defied the odds and their own expectations as the Berkshire club find themselves in the thick of a title race, but their hopes of moving to the summit of National One were dented after they were edged out by Richmond.

The constant message from the Rams is that they are just enjoying their first ever campaign at this level and they will be eager for that winning feeling to return instantly in Round 20 when they head to Hull Ionians on Saturday. The hosts weren’t in action last week following the funeral of 1st XV player Billy Hardy, but the Yorkshire club resume National One duties at Brantingham Park as they look for a positive end to the season. The I’s have been embroiled in a relegation battle for the majority of the campaign, so with the odds stacked against them, can Mike Umaga’s side upset the applecart to secure their second victory of the term?

Elsewhere in National One this weekend, Chinnor - who are 11 points off the top – host old foes Cinderford, Blackheath entertain Sale FC and Darlington Mowden Park take on a Rotherham Titans side looking to build on the crucial win they achieved in Round 19. Meanwhile, Old Elthamians travel to Birmingham Moseley and an in-form Cambridge can make it six wins on the spin when they face bottom of the table Canterbury.

Caldy enter their 19th match of the season in unstoppable form. We are running out of superlatives for Gareth Davies’ side following 18 consecutive wins and it is becoming a case of when rather than if the Wirral outfit will lift the National Two North title.

The league leaders swept Luctonians aside last week and they entertain Hull at Paton Field in Round 20. The Yorkshire club secured their first victory in three matches last Saturday as Gary Pearce’s side produced an excellent comeback against Chester. Pearce, himself, said it will be a tough task for his charges but halting Caldy’s dominance is a challenge they will be relishing.

Third-placed Sedgley Park returned to winning ways in Round 19 and it was a victory Scott Barrow’s side might look back on with fondness if they were to finish in the top two this season. The Tigers came from 21-3 down to clinch a 30-28 triumph over Stourbridge and it keeps Sedge four points behind promotion rivals Fylde heading into Round 20.

Promises to be fantastic game https://t.co/NgxuLVnpaJ

If Sedge thought they had to battle against Stour, they will be in for another tough encounter against Hinckley on Saturday afternoon as the Hornets are one of the form sides in the division. The Midlands club have won six of their last seven games and they haven’t lost at Leicester Road since October. With Caldy to come on two occasions in February, this would be a significant win for Sedge if they were able to get the job done at Hinckley.

Now to the opposite end of the division where Huddersfield and Preston Grasshoppers are currently involved in a battle for safety in National Two North. In truth, Field could take a huge step away from the fight for survival this weekend if Gareth Lewis’ side can continue their impressive recent form at Lockwood Park.

The Yorkshire club have really sparked into life since the turn of the year and successive wins over Fylde and Scunthorpe have lifted Huddersfield out of the drop zone. In terms of Preston, head coach Paul Arnold stated his side were ‘disappointed’ in Round 19 as they had to settle for a draw against Wharfedale. This week’s trip across the Pennines now represents a crucial opportunity for Hoppers to start reducing the gap of 11 points which separates the Lancashire club from safety, but if they did fail to gain a positive resul,t it would be a major blow to their survival hopes.

Henley Hawks were not drawn into title race chatter too much on Tuesday evening. The latest episode of the NCA Podcast was recorded at Dry Leas earlier this week but Director of Rugby Nigel Dudding and head coach Luke Allen were keen to stress the new National Two South leaders are purely focused on one game at a time.

The Hawks moved to the summit after they defeated Worthing Raiders in Round 19 whilst rivals Tonbridge Juddians lost to Taunton Titans. Henley now hold a four-point lead at the top and the next two weeks could prove vital in terms of their ambitions. With TJs to come at the start of February, they visit Redruth at the conclusion of this month and the Reds have slowly snuck their way into the promotion picture. Nigel Hambly’s men have won 10 of their last 11 games and they are only eight points behind second-placed Tonbridge Juddians. It is set to be a cracker at the Recreation Ground on Saturday and for both teams, the outcome could be season defining.

Tonbridge Juddians title prospects suffered a dent last time out as they were beaten by rivals Taunton Titans. Peter Dankert’s side saw their run of seven straight wins come to an end in Somerset, but they are still in the top two heading into their fixture with Worthing Raiders.

"If we can get this big five-point win at the weekend, it brings us back into the game..."??

The Raiders have not had the easiest introduction to the New Year having played three of the top four sides thus far and they will make it a full house at the Slade on Saturday. Prior to the Christmas break, Worthing had picked seven wins from a possible eight matches but now they have lost three successive games on the bounce. With TJs looking to get their promotion bid back on track, could Worthing put another dent in their ambitions or will the Kent outfit respond immediately?

Down at the foot of the table, it has been quite the few weeks for Westcliff as back-to-back victories over Sutton & Epsom and Old Redcliffians have significantly boosted their survival chances in National Two South. Peter Mahony and Jacob Ford’s men are now 10 points clear of the drop and they can potentially move further away from the relegation zone this weekend.

Their final fixture of a fruitful January sees them host bottom of the table Bournemouth. The Lions arrive at the Gables in need of a victory to really stand any chance of sparking a revival as the south coast side currently sit 14 points from safety. Whilst they maybe propping up the division, Bournemouth have been unfortunate not to pick up more wins in recent weeks. Narrow losses to Old Albanian and Henley Hawks would have been frustrating for the club, but a trip to Westcliff is the perfect opportunity for Richard Sharp’s men to channel their disappointment into a welcome victory.