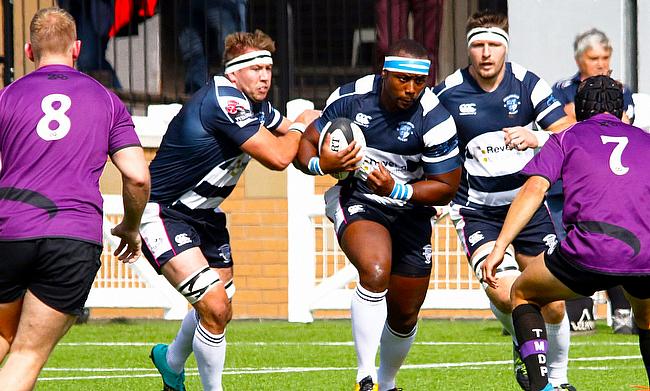 Meanwhile, two of last season’s play-off hopefuls Hinckley and Tynedale met at Leicester Road with the former picking up the win in Round One.

Converted tries from Daniel Ireland and Benjamin Palmer edged South 14-10 ahead only after Jordan Simpson had given Macc an early lead.

Despite huge amounts of pressure from @MaccRUFC the boys of @SouthRfc made their possession count and game away 47 - 24 winners. No better start to the season. pic.twitter.com/JYyJxat8cv

Sam Moss also touched down for the visitors just before half-time, but scores from Joe Lane and Matthew Travers in a four-minute period put the hosts in complete control.

Kane Ditchfield did keep Macc in touch with a score on 52 minutes, but South were ruthless once again as Joseph McMenamin and Thomas Cheney both touched down.

Jonathan Mason clinched a bonus-point for Macclesfield three minutes from time, but South had the final say as Ireland crossed for his second try late on.

After finishing in third place last season, Stourbridge kicked off the new campaign with a victory as a strong second half performance proved too much for Leicester Lions.

Nigel Mukarati went over in the first half for Stour and a penalty try plus three penalties from new signing Rickie Aley gave the hosts a 21-15 lead in this all-Midlands affair.

Devon Constant and Ethan Godefroy crossed for Leicester in the first period and the away side took the lead on 52 minutes thanks to a Henry Clement try.

However, they were ahead for just three minutes as scores from Sam Montieri and Aley gave Stour a 13-point advantage.

Harry Key struck a penalty for the Lions, but Aley wrapped up the win for his new club with a second score on the 79th minute.

Hinckley produced a battling performance to see off Tynedale to start the new season with a bonus-point victory.

The home side were brilliant in the first half, leading 21-10 as Alex Salt, Josh Smith and Ryan Hough crossed.

Joe Wilson and Joe Glover extended Hinckley’s lead after the break, but Tyne responded as Liam Checksfield added to the first half tries of Morgan Passman and David Batey.

Henry Povoas made it 40-17 to Hinckley, but the visitors continued to fight as Checksfield and Joe Mills both touched down.

But it was Hinckley who rounded off proceedings as replacement prop Jack Dickinson dotted down.

The visitors were 19-0 ahead at the break thanks to tries from George Hedgley, Josh Prell and Dan Stockdale.

And a second-half penalty try did ensure Dale the victory despite the best efforts from Peterborough Lions who scored via Ali Lea and Will Nankevil.

Craven’s double came in the first half - after Andrew Oakden had opened the scoring for Chester – and the hosts led 31-18 at the break.

The Hoppers did respond extremely well to cut the lead to six points as James Fitzpatrick and Peter Altham both went over just before the hour, but a second penalty from Josh Morris and another score from King ultimately sealed the win for Chester.

Tyler Spence did cross late on for Preston, but in the end, it was merely a consolation for Paul Arnold’s side.

Fylde produced an excellent first-half display to begin life back in National Two North with a victory over Otley.

Touchdowns by Joe Graham and Harry Skelton saw Otley bounce back in the second period, but the damage had been done in the first 40 as Warren Spragg’s side kicked off the season with a win after relegation from National One last term.

Dan Maher opened the scoring for Sedge, but it was swiftly cancelled out by Kian Stewart inside the opening 10 minutes.

Will Milner’s penalty gave Field the lead, but tries from Riley and Ollie Glasse put the visitors 19-10 in front at the interval.

Huddersfield started the second period on the front foot as new scrum-half Jack Maplesden dotted down, but Riley’s second kept the hosts at arm’s length.

Jack Harrison then darted over on 57 minutes for Matt Bebbington’s side, but Tom Hodson’s try five minutes from time set-up a tense finish.

And Field’s chances of snatching a result were enhanced when Nathan Rushton was shown a red card late on, but Sedge held out for the victory at Lockwood Park.

Sam Wilson scored a late try to give Hull Ionians a winning start after a thriller against Sheffield Tigers.

The visitors seemed set to grab the win against the recently relegated I’s thanks to tries from Lee Monks, Pete Swatkins, Henri Packard and Jamie Broadley.

But Hull Ionians were able to keep in touch following a penalty try and scores via James Sanderson, Ben Stephenson and James Newman before Wilson struck in the 79th minute to snatch the victory at Brantingham Park.