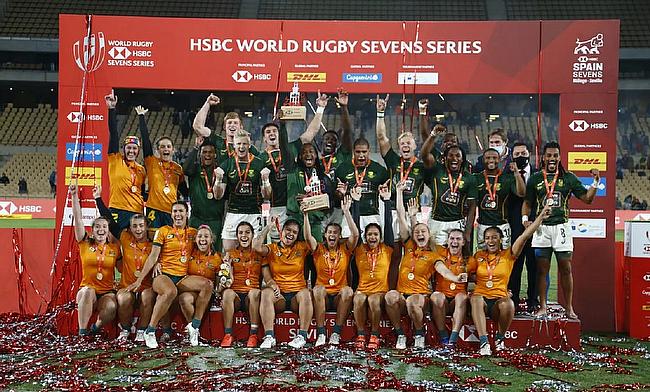 Christie Grobbelaar scored a double as South Africa defeated Australia in the final with a 33-7 margin to win the Seville leg of the HSBC Men's World Rugby Sevens Series.

Australia were the first to score with Ben Dowling touching down in the 6th minute and Dietrich Roache kicked the conversion to make it 7-0 but as the break was approaching, Selvyn Davids sent a grubber kick for Grobbelaar to score. Davids also followed with the conversion as the teams completed the opening half unseparated with a 7-7 scoreline.

The spotlight was once again on the HSBC Player of the final with Grobbelaar touching down straightaway into the second half as he completed his second try before Ryan Oosthuizen crossed, despite the Blitzboks being a man down with Darren Adonis in the sin bin.

Any chance of an Australian comeback was put off as South Africa scored two more tries from Darren Adonis and Impi Visser as they completed a resounding 26-point victory.

“As you can see it’s a little bit emotional. The boys gave a big fight, this is a huge win for our system,” said South Africa captain Impi Visser.

“They are a tough team to play against, credit to them. I think our boys just grafted a bit more and in the end we wanted it a bit more.”

Earlier, South Africa defeated Scotland and Ireland in the quarter-final and semi-final respectively while Australia had wins over USA and Argentina to reach the final. Argentina settled for Bronze following a 12-5 win over Ireland.

This is fourth consecutive title win for South Africa in the competition following victories in the first two Dubai legs followed by triumph over Malaga 7s as they have 88 points while Argentina and Australia are at second and third respectively with 70 and 66 points.

In the women’s decider, Australia’s Faith Nathan scored a match-winning try after the buzzer to clinch a comeback victory over an Ireland side competing in their first ever Cup final.

“It was a great final. We always said Ireland were a fighting team and they certainly did fight to the end, but it was awesome to see our girls out there fighting just as hard to the end with that final try,” HSBC Player of the final Dominique Du Toit said.