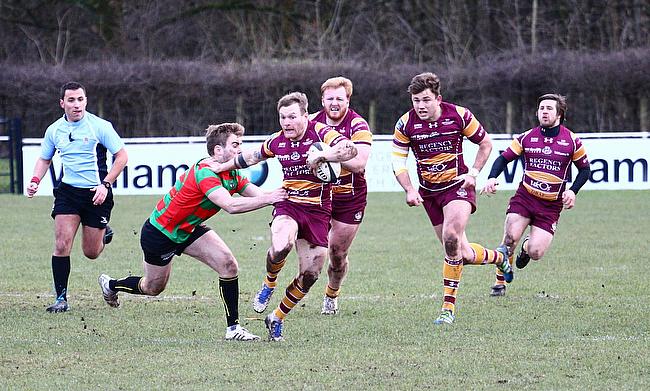 In some sports, the winter months can define the outcome of a season and in National Two North, January is the time of year which may well shape the battle for a top two spot.

With promotion candidates facing one another over the next coming weeks, results at this stage of the season can prove to be vital; none more so than Hinckley against Sedgley Park this Saturday.

The league leaders Hinckley play host to fourth placed Sedge with nine points separating the two sides while fellow promotion hopefuls Sale FC, Stourbridge and Tynedale will be ready to strike no matter what the outcome is in the Midlands.

League leaders Hinckley welcome Sedgley Park to Leicester Road this weekend in a huge fixture at the top of National Two North. The Midlands side began the New Year with a professional display against Leicester Lions to keep them four points clear of the chasing pack and with January possibly being a defining month in their season; it was the perfect start for George Chuter’s men.

Hinckley have not lost at home so far this term, so Sedgley Park know that this will be a tough challenge. Matt Bebbington’s side are fourth in the table and nine points off Hinckley as things stand so a victory this weekend really does enhance their top two ambitions. Against promotion rivals in this campaign, Sedge have suffered three defeats, but they did beat Hinckley 45-29 in the reverse clash back in September. This fixture could go a long way to shaping the rest of the season so who will come out on top this weekend?

After overcoming the challenge of Sheffield Tigers last weekend, Sale FC are back in the Steel City this Saturday as they take on Sheffield. They will no doubt have one eye on proceedings in the Midlands as Hinckley face Sedge, but the task for Jonathan Keep’s side is to maintain their pressure. The men from Heywood Road are on a nine game winning run – which stretches back to October -  and they are four points off Hinckley with a game in hand.

The ball seems to be in Sale’s court in terms of their promotion ambitions, but they will have to be wary of their hosts. Sheffield may have lost heavily away at Stourbridge last weekend, but they have won three of their last five games including two victories at Abbeydale Road. Three seasons ago, both of these sides were competing for a place in National Two North, but both now have different aspirations for this current campaign and the Yorkshire side will be hoping a win this Saturday will bring them a step closer to their survival goal.

It is now three straight wins for Stourbridge after a run of four games without a victory in November. Neil Mitchell’s men have responded well from their mini dip in form towards the end of 2017 and are now right back in the hunt for a top two finish. The Midlands side moved up to third place following their triumph over Sheffield in Round 17 and they are just two points behind Sale FC having played the same amount of games.

They welcome a buoyant Wharfedale side to Stourton Park this Saturday after the Yorkshire outfit secured their third win of the campaign last weekend. Dale battled to a crucial victory over fellow strugglers Luctonians which means the division’s bottom club are now eight points from safety. James Doherty’s men have won just once away from home this term, but victory in the Midlands would be a significant result in their fight for survival.

It was a disappointing start to the New Year for Tynedale last weekend. Scott Lawson’s men saw a half-time lead slip away from them as they were beaten by Huddersfield to end a five game winning run, but more importantly, it put a dent in their promotion ambitions. Tyne are seven points off the top two, but they do have a game in hand and they have two games in hand over league leaders Hinckley.

The northeast outfit will now be looking for a response this weekend against a Leicester Lions side that also began 2018 on the wrong end of a result. Jack Heald’s men could not find a way through against Hinckley last Saturday so they will be hoping for a bit more joy on the road this time around. Heald said before the Christmas break that the Lions were picking up momentum and he will be aiming for his side to recapture their form as they look to open their account for the second half of the campaign.

South Leicester’s patchy form continued last weekend as they were edged out by Sedgley Park making it just one win from their last five matches for the men from Welford Road. Despite their inconsistences, the Midlands club still sit sixth in the table, but they will be eager for a first victory for just over a month to reignite their campaign.

Another side desperate for a victory are Sheffield Tigers. It is now six games without a win for the Yorkshire outfit who may have fought their drought was coming to an end against Sale FC last Saturday. After an excellent first half display, the Tigers failed to pounce in the second period as Sale showed their class to claim the win. The men from Dore Moor will be hoping their wait for a victory will come to an end this weekend.

Life at the helm has gone very well for Macclesfield interim Head Coach Marshall Gadd so far. Back to back wins for the first time in 21 months has seen the Blues move eight points clear of the relegation zone in Gadd’s short spell in charge and also, the Cheshire side have two games in hand. Their fate is very much in their control and they return to Priory Park this weekend following a crucial win over Blaydon in Round 17.

Confidence will no doubt be high amongst the Macc ranks, but they welcome a side which is also riding a crest of a wave. Huddersfield have had a superb season so far and their win last weekend against Tynedale typified their first campaign back in National Two North after relegation in 2016. Gareth Lewis’ men are currently seventh in the table and head to Cheshire having won five of their last six matches. Field are flying at the moment and they will feel that they can keep up their excellent form this Saturday.

Chester fought off a resurgent Otley last Saturday to begin 2018 with a welcome victory ahead of their trip to Luctonians this weekend.  The Cheshire side have won two of their last five fixtures, but their away form doesn’t make for pretty reading. The men from Hare Lane have triumphed just once on the road this term, but they may fancy their chances against an out-of-form Luctonians.

The hosts slipped to their 10th straight loss last weekend when they were beaten by Wharfedale which now leaves Ryan Watkins’ side five points from safety. It is far from over for the Lucts and if Watkins’ recent comments are anything to go by, belief is still very high at Mortimer Park that they can turn their form around in the near future. With the home crowd behind them this weekend, Luctonians will be hoping their wretched run of results comes to a shuddering halt on Saturday.

Otley’s run of form in December may have settled some nerves around Cross Green. Peter Clegg’s men won three out of four matches just before the festive break and despite defeat to Chester last weekend, the Yorkshire side will still be feeling positive. After a dismal first half in Cheshire, Otley battled back to secure a losing bonus point which leaves them five points clear of the drop zone.

Congrats @MaccRUFC on a hard fought 34-52 win. Loads of tries on show. Safe journey home and all the best for the rest of the season.

However, what Otley will be aware of is all four of the sides directly below them in the table have games in hand including their guests on Saturday, Blaydon. Both clubs sit on the same number of points so the outcome of this fixture could play a part in shaping the rest of this season. For Blaydon, it has been a very tough campaign following relegation from National One and a home defeat against Macclesfield last Saturday would not have helped matters. The northeast club have the quality to turn their fortunes around and a win at Cross Green would be a welcome boost for Matt Thompson’s side.