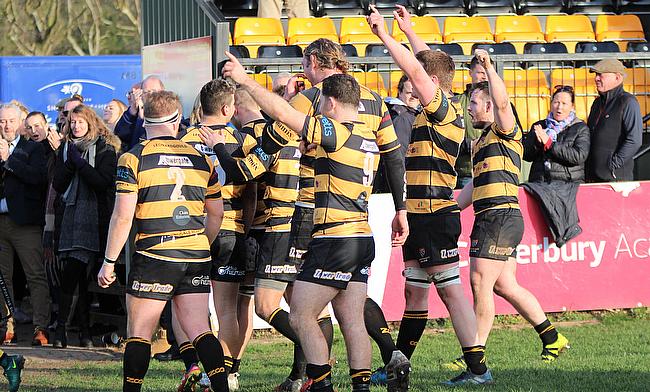 Canterbury boosted their chances of securing the National Two South play-off spot as they came from behind to secure a bonus-point victory over Henley Hawks.

The City Men had a first period to forget at the Marine Travel Ground, but Andy Pratt’s side produced an excellent second half display to clinch a potentially pivotal victory.

Canterbury are now seven points clear of Henley and Tonbridge Juddians, who beat Taunton Titans in Round 26.

Above the battle for second spot are Rams RFC and they moved closer to the title after a convincing victory against Worthing Raiders.

At the wrong end of the division, Birmingham and Solihull have enhanced their survival chances after an excellent win over Old Albanian and the Bees are now only six points from safety. Guernsey are also still fighting to avoid the drop as they came out on top against rivals London Irish Wild Geese at Hazelwood.

National Two South leaders Rams RFC continued their surge towards the league title with a nine-try win over Worthing Raiders.

Ellis Jones and Andrew Denham put the visitors ahead inside the opening 10 minutes as Seb Reynolds’ side made a flying start at Roundstone Lane.

Further tries from Greg Illingworth, Denham and Jamie Guttridge before the break put the Rams in complete control.

Scores from Ben Henderson, Craig Nightingale and Tom Vooght kept the table toppers in the ascendency before a penalty try wrapped up the win.

The outclassed hosts could only score through Curtis Barnes while victory for the Rams means they require just two points from their next fixture against Redruth to confirm a top two finish.

Canterbury recovered from 21-7 down to secure an outstanding and potentially crucial victory over Henley Hawks in the race for a play-off spot.

David Hyde, Jacob Albon and Ian Stock all crossed to give the visitors a 14-point half-time lead, only after Aiden Moss had put Canterbury in front.

This was both a great rugby match and, for Canterbury, a revival meeting. Trailing by fourteen points at half time they staged a spectacular comeback, crowned by a winning try in the final minute of the game.

Both teams swapped scores after the interval as Charlie Grimes’ effort was wiped out by Ben Bolster, but the final quarter belonged to Canterbury.

James Stephens, Sean Stapleton and Tom Best all touched down to complete the turnaround for the City Men, who are now seven points clear of both third-placed Tonbridge Juddians and Henley.

Tonbridge Juddians beat Taunton Titans to secure their ninth win on the bounce as they remain in the play-off conversation.

The visitors scored the only try of the first half as Hugo Watson’s effort helped TJs into a 7-0 lead.

The away side opened up a 12-point gap when Murray Galbraith-Lowe crossed immediately after the restart, but Taunton brought themselves back into the contest through Aron Struminski.

Galbraith-Lowe grabbed his second try on 70 minutes and despite Max Woodward cutting TJs’ lead to a converted score, the visitors were able to clinch the victory thanks to Watson’s late effort.

Fourteen-man Redruth were unable to snatch a victory against Barnes as the visitors came out on top in a frantic contest in Cornwall.

The losing bonus-point does keep Nigel Hambly’s side in sixth spot and the Reds certainly battled hard despite James Simmonds’ red-card in the opening period.

Barnes did lead 15-3 at the break thanks to scores from Matt Steele and Alastair Ryan, but they couldn’t continue their dominance in the second half.

Redruth capitalised on two yellow-cards shown to Barnes as Dean Bonds and Jack Simmons both touched down, either side of a penalty try, to give the home side a 20-15 lead.

But with six minutes to go, Barnes came up with the decisive score as Josh Davies crossed and it proved to be enough to win the game as Redruth failed to rescue the victory with a late penalty attempt.

Clifton narrowly beat Bury St Edmunds to end a run of three games without a win in National Two South.

Mitchell Spencer opened the scoring for Clifton, but tries by Mark Kohler and Patrick Robinson saw Bury lead 12-5 after 27 minutes.

Sam Goatley’s try before half-time levelled the game up and the match remained all square after Finlay Sharp and Dan Hill exchanged scores in the second period.

But, Goatley’s second try was converted and that proved to be the difference as Bury failed to add the extras when Sharp scooted over in the final act of the contest.

Birmingham and Solihull’s survival bid received a major boost in Round 26 as they beat Old Albanian to move to within six points of safety.

Great win today for @BSBeesRugby. As a side note, I had the pleasure of interviewing @spinko93 post match. I have watched him from a young colt to the very accomplished rugby player he is todaycoming back from a horrendous injury. One of many reasons why I support our club #COYB

The sides then shared 31 points in the remainder of the first half and it was the Bees who were narrowly in front at the break following scores from Nathan Tilsley (2) and Umraan Jadwat.

Another penalty from Watt and a Charles Watson try had made it 26-20, but the home side increased their advantage as Jadwat grabbed his second before centre Dan Kelly scored a brace.

In the final 15 minutes, OAs were able to secure a bonus-point thanks to tries from Alex Charlcraft and Sam Crean, but Birmingham and Solihull had done enough to clinch a vital victory.

Dings Crusaders came out on top against Old Redcliffians to seal a welcome victory in the Bristol derby.

After a run of just one win from seven games prior to Round 26, Luke Arscott’s men ended their baron spell to take a step closer to securing their spot in National Two South for next season.

The score was 19-10 to the hosts at the break as Harry Tovey, Jake Holcombe and Matt Smith all touched down, while Chris Pursall grabbed Old Reds’ only score.

A penalty from Tovey increased Dings’ lead, but just before the hour, Kiyan Wiltshire dotted down for the visitors to make it 22-17.

Both sides failed to show a true clinical edge in the second period as the Crusaders held on to move eight points clear of the relegation places, while Old Reds are now just six points above of the drop.

Scores from Douglas Horrocks, Bradley Webb and George Thomas, as well as a penalty try, had helped the away side into a 26-12 lead.

Yes lads!!! It’s another WIN for the Raiders in today close game away to London Irish winning 38-47. https://t.co/et3DgBE6dF

But the Wild Geese, who had crossed twice through Sean Cunningham and Oli Turner, scored three tries in a sensational end to the first-half as George Owen completed a stunning six-minute hat-trick.

Layton Batiste made the game 31-31 as he went over for Guernsey’s fifth score at Hazelwood, but a ruthless Owen scored again to give the hosts the lead.

However, Guernsey would have the final say as Thomas Ceillam and Thomas Teasdale both touched down to seal the victory for the Raiders, which leaves them 11 points from safety. In terms of the Wild Geese, they are now 16 points adrift with four games to go.