Guernsey give themselves glimmer of hope 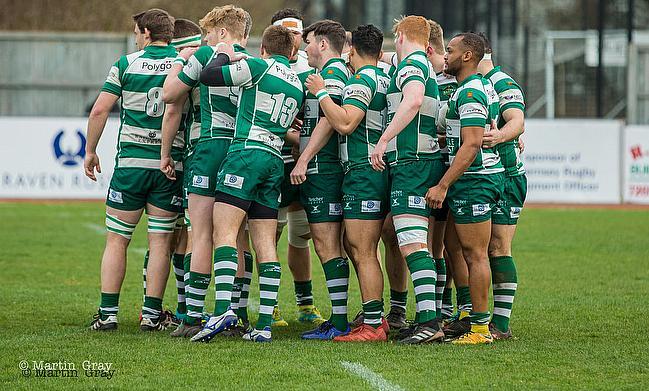 Guernsey Raiders still have work to do if they are to avoid relegation, but victory over Old Reds has given them a chance
©Martin Gray

Guernsey have given themselves hope of pulling off a remarkable escape from relegation following an excellent win over Old Redcliffians.

Jordan Reynolds’ side are 14 points from safety and there remains a lot of work for the Raiders to do, but they still have a fighting chance of avoiding the drop.

Rivals London Irish Wild Geese and Birmingham & Solihull both suffered defeats on the weekend as they continue to also fight for survival in National Two South.

At the top, Rams RFC edged closer to a place in National One after producing an excellent display to defeat Taunton Titans while the race for the play-off position continued.

Tonbridge Juddians, Canterbury and Henley Hawks all picked up victories in Round 25 and the latter two clubs do face one another on March 23rd as the battle for second-place intensifies.

Elsewhere in National Two South, Redruth came out on top at Bury St Edmunds, Old Albanian got the better of Clifton and Barnes left it late to snatch a victory against Worthing Raiders.

Rams RFC have moved another step closer to the National Two South title after a comfortable bonus-point win over Taunton Titans.

Rams made an electric start to the game as Andrew Humberstone and Andrew Denham both crossed inside the opening 14 minutes.

An interview from Seb Reynolds Head Coach of RAMS Rugby.?? Who discusses @Rams_RFC performance against @tauntonrfc ???? at Old Bath Road today.??The Rams played some great rugby throughout and scored some outstanding tries.??The Rams extend their lead at the top of the table.?? pic.twitter.com/FWlI4zQJTv

The away side responded through Lewis Webb, but a try from Ellis Jones as well as a penalty from Alex Seers put Rams 22-7 ahead at half-time.

Jamie Guttridge and Humberstone added further scores after the break and although Taunton sparked a fightback through Matt Jess and Max Woodward, Conor Corrigan completed the job for Rams late on.

The victory for Rams keeps them 12 points clear at the summit with five games to go in the season.

Canterbury continued their match towards the National Two play-off with a comprehensive bonus-point win over relegation-threatened London Irish Wild Geese.

The home side were firmly in this contest at the break thanks to James Brooks’ penalty and a try from George Owen, while Canterbury hit back with scores from Ben Rashid-Neville and Dan Smart to make it 12-8.

Wild Geese did cross on 55 minutes through Brandon Baker, but this defeat leaves them 15 points from safety while Canterbury remain four points clear of their nearest challengers.

Henley Hawks won their seventh game in a row as they kept the pressure on second-placed Canterbury with a battling bonus-point win against a spirted Birmingham and Solihull.

Dan Barnes crossed to give Henley the lead, but a penalty from Jack Jolly and a score via Harry O’Brien put the Bees ahead.

But, the Hawks regained their lead as Tom Hall and Sam Lunnon both dotted down either side of half-time, however, the away side levelled the game as Nathan Tilsley scooted over for 17-17.

Both sides exchanged scores when George Griffiths and Oscar Heath crossed, but Henley’s try was converted to give them a slender advantage.

The Bees’ accuracy from the tee would cost them a losing bonus-point as five minutes from time, Liam O’Neill touched down to seal the victory for Henley.

The Hawks are four points behind Canterbury while this loss for the Bees means they are now nine points shy safety.

Tonbridge Juddians’ scored four tries as Peter Dankert’s side clinched their eighth win on the spin against Dings Crusaders.

Weird thing to say, but even though @DingsCrusaders conceded four unanswered tries against @TJRFC the attitude, work-rate and team spirit was right up there today. The home side deservedly got their bonus-point win, but they had to work hard for it. #utd????????

Winger Murray Galbraith-Lowe opened up the scoring inside the first minute and his converted try proved to be the only points of the first period.

In the second-half, Charles Edwards and Matas Jurevicius scored quick-fire tries to keep TJs in control while Ryan Jackson’s effort sealed a comfortable win for the hosts, who remain seven points off the top two places.

Bury led 3-0 at half-time thanks to Anton Limlei’s penalty, but the second period sparked into life in Suffolk.

In the final 10 minutes, the Reds were reduced to 13-men as both Pale Nonu and Jake Clemson were sin-binned, but Bury could only manage a converted try from Will Affleck in the last play of the game.

Old Albanian secured their second home win on the spin after easing past Clifton at Woollams.

Three tries, including one apiece for Alex Ricci, and Luke Barber put OAs 17-0 up in as many minutes. A penalty try provided Clifton with some respite, but a bonus-point score before the break gave the home side a 12-point lead.

Two tries immediately after half time, one coming from Morgan Thompson, kept OAs in control and both teams swapped scores in the final quarter.

However, the hosts had the final say as Charlie Watson darted over to secure the victory.

The game was level at 14-14 at the break, with Barnes’ tries coming from Tom McArthur and Fred Avis while Curtis Barnes grabbed a brace for Worthing.

Miles Wakeling put the hosts in front, but Harry Barnes’ hat-trick and a score via Jack Maslen gave the Raiders a 26-21 lead with nine minutes remaining.

However, Smith’s late try tied the game up and Josh Hammett kept his nerve to snatch the win for Barnes.

Guernsey have given themselves a glimmer of hope in the battle for survival by beating Old Redcliffians in a thrilling contest at Footes Lane.

A penalty try just after the hour proved to be the difference for the Raiders, who are now 14 points from safety and off the bottom of the division.

Relive the moment the @GuernseyRFC beat Old Redcliffians 24-17 at Footes Lane. They are OFF THE BOTTOM OF THE TABLE! Great day. pic.twitter.com/3QG20p4GEt

George Shannon and Elia Morisio scored tries for the hosts in the first-half, while Luke Sayer crossed after the break for the Channel Island outfit.

Ashley Groves and Christian Gervais went over for Old Reds, but Guernsey did enough to seal their first win since the end of January.