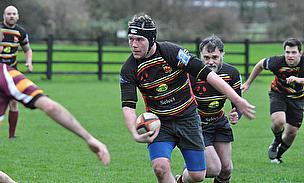 The injury list is till high at Tarleton and despite this the seconds were just able to field 16 players for this week’s clash against Sedgley Park thanks to some "gentle persuasion" that saw a number of players back from semi-retirement.

Ben Traynor, Matty Parker and Chris Slinger were rescued from obscurity to put their boots on together for the first time in a number of seasons and once again the colts turned out to make up the numbers required.

Sedgley had a full squad of 18 players and they had a sprinkling of their colts in the ranks too.

The first 15 minutes of the game were scrappy and ill-tempered with neither side being able to establish superiority or put phases together. It was Sedgley who got on the scoreboard first when as Tarleton were running the ball out of their 22 a looped pass was intercepted by the pacey Sedgley number 10 who ran through to score under the posts.

Ten minutes later they scored again as the undrilled Tarleton back line came up far too fast in the middle and left a huge gap which the fly-half exploited and a well-timed pass to his winger saw him dive over in the corner.

With 25 minutes gone Tarleton were 12-0 down but they started to create some good possession with forward play that saw them make ground and put some phases of possession together. A good break by Matty Parker saw Tarleton deep in Sedgley's 22 but they lost the ball in the set-piece and Sedgley cleared their lines.

The next attack Tarleton put together ended with a rolling maul that was going forward but was illegally brought down, a penalty was awarded and Bryn Wignall brought the deficit down to make the score 12-3.

The last five minutes of the half were spent on the Sedgley line but resolute defending by Sedgley kept Tarleton out.

In the second half Sedgley came out of the blocks quicker than Tarleton and from an early scrum their number eight picked up and broke through the Tarleton line and with some good interplay with the fly-half made their way over the line for the number eight to finish the move he started with a good try.

The conversion was good and Sedgley led 19-3.

Tarleton again put a period of pressure together and good breaks from Jack Gee and the young Will Parker saw gaps begin to appear in the Sedgley defence. One break from Jack Gee was stopped with a despairing tackle but Jack was able to offload the ball to Lewis Burton as he fell and Lewis went in under the posts to score.

The conversion was good and Tarleton were back in the game at 19-10 down and 15 minutes to play.

Sedgley were beginning to tire in the pack and despite winning plenty of ball Tarleton could not find a way through the Sedgley defence and were unable to close the gap before the final whistle went.

For what was a scratch side this wasn’t a bad performance at all from Tarleton but again the lack of fresh legs to come on gave Sedgley a slight advantage which they used well towards the end of the game.

The colts again played well and did not look out of place at this level.

There is no rugby next week so let’s hope that in a fortnight some of the senior squads aching bodies can recover ready for games against Wigan and Heaton Moor RUFC.

A 2017 Rugby Feast at Tarleton

Rugby from around the Northwest