Saracens continue to set the pace in Europe 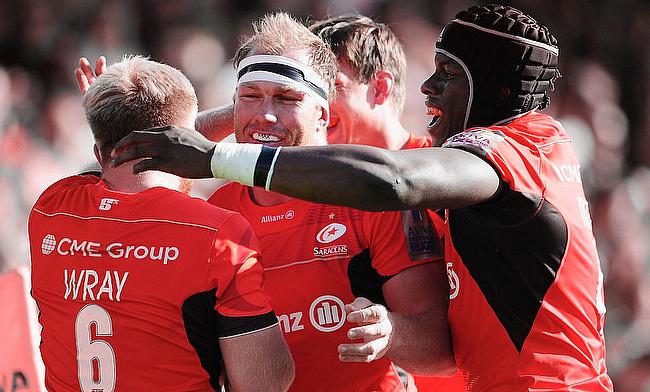 Saracens were the undisputed kings of England and Europe last season, wrapping up the Aviva Premiership and European Rugby Champions Cup double.

It was a fantastic achievement and one worth lauding but talk of them retaining both their titles in the 2016/17 season seemed unrealistic in the offseason. As good as Saracens are, retaining one title is hard enough, let alone two, especially when one of the two brings together all of the best sides in Europe.

We may only be three games into the new season but with each game that has come and gone, that talk of them doing the double once again has seemed less and less fanciful.

Saracens were slow out of the blocks against Worcester at Twickenham in the London Double Header, shaking off some of the inevitable rust, but after half-time they ran away with it, cruising to a 35-3 victory when they were in no more than second or third gear.

They followed up that victory with a 34-13 win over Exeter Chiefs – at Sandy Park – in a game that had even the staunchest Saracens detractors nodding in quiet approval. Teams just don’t go down to the South West and put a hurt on the Chiefs like that. It’s simply not done.

Their biggest challenge came in their third game, their seasonal home debut against Northampton Saints. Northampton’s pack gave them as thorough a work out as they are likely to see this season yet still the North Londoners prevailed, recording a 27-12 win over their rivals.

What’s even more impressive is the fact that Saracens were without star fly-half Owen Farrell for the first three games, lost ever-reliable second row George Kruis after the Worcester match and new additions like Schalk Burger, who was named man of the match against Northampton, are still finding their feet and trying to get up to speed with Saracens’ style of play.

Furthermore, tighthead prop Vincent Koch will arrive at Allianz Park when his Springbok duties are done, Fijian sevens sensation Savenaca Rawaca is yet to be incorporated in and former England U20 flyer Nathan Earle is gaining confidence and form on a loan spell at Canterbury in the Mitre 10 Cup and set to return in November.

It’s hard to find areas to pull Saracens up on at this point. The fly-half situation was considered dicey in the offseason but Alex Lozowski has shown his ability in droves, filling in superbly for the injured Farrell and has alleviated all concerns about how Saracens will shape up at the position during test windows. Max Malins and Ali Crossdale, two of the more exciting performers at international age-grade level in recent years, also wait in the wings.

Improvements made by other teams, as opposed to any weaknesses Saracens have, are much more likely to stand in the way of the club’s bid for success this season.

Wasps and Bath have started the Premiership season well, looking like complete teams and genuine threats. It’s early days and Leicester, Exeter and Northampton will all likely improve as the season moves on, but as of right now, they look significantly short of Saracens. Bath’s ability to focus on the Premiership, having slipped into the Challenge Cup last season, should help them try to deny Saracens a third-straight Premiership title, whilst Wasps look a formidable threat to the Londoners’ domestic and European titles.

Among the Guinness Pro12’s Champions Cup-qualified teams, Glasgow Warriors and Ulster have looked a cut above so far. Leinster have yet to hit top gear but are another side capable of making waves. Unfortunately for Glasgow, they are in a pool with Leicester and Racing 92 and for all of their form in the Pro12 in recent seasons, they have struggled to make an impact in Europe. The pools have been kinder to Leinster and Ulster and both could make the quarter-finals, but as for having the firepower to topple Saracens, neither seem likely to at this point.

It’s from France where Saracens’ biggest threat may come. Their budding rivalry with Racing 92 is a prime candidate to be reignited this season, they will face off with Toulon in the pool stage and Clermont, whose European flower had seemed to be wilting of late, have been in fine form in the Top 14.

All kinds of things can happen between now and the end of the season but Saracens finished the 2015/16 campaign as the best side in European rugby and nothing has changed in the opening weeks of the northern hemisphere season to suggest that they will give up that mantle in 2017.