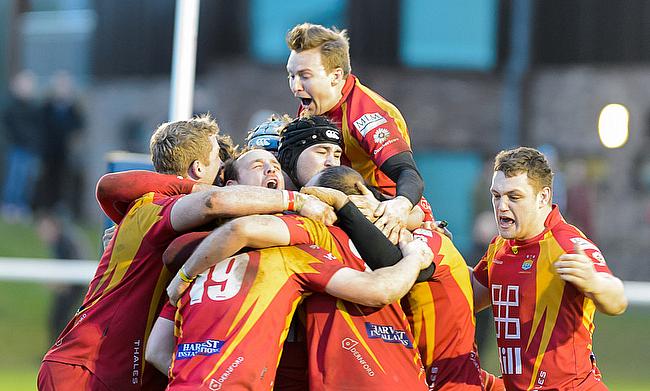 In the final round of the National League season, the attention was well and truly on National Two with relegation still looming for sides in the North while the title was yet to be decided in the South.

In National Two North, Sandal were relegated after defeat away from home against the Luctonians. Their fate was sealed because Sale FC beat Caldy at Paton Field to move out of the relegation zone and there were also crucial victories for South Leicester, Chester and Tynedale who were in this battle for survival on this final day of the season.

In National Two South, the title race had gone right down to the wire as leaders Cambridge and Old Albanian headed into this weekend separated by just two points. Cambridge knew a win at home to already relegated Dorking would clinch them the crown and promotion to National One and they did that in style at Volac Park. The Old Albanian thrashed bottom club Launceston, but now they have to settle for a play-off spot.

With promotion and relegation already decided in National One, the spotlight was on the runners-up spot as three teams were gunning to finish in the top two. Before the start of play, Hartpury College, Ampthill & District and Blackheath were separated by just a point and it was the side that began the day in second place that stayed in the top two as Hartpury College got their job done with a comfortable win over Hull Ionians.

Sandal have been relegated from National Two North following a 35-12 defeat against the Luctonians. The Yorkshire side could only manage four penalties throughout the afternoon before the hosts ran in four tries in the second-half to seal Sandal’s fate.

Before the start of the day, it was Sale FC who occupied the final relegation spot in this division. They knew a win for them away at Caldy and a loss for Sandal would see them survive in National Two North and they managed to achieve that. The Manchester-based club won 16-8 at Paton Field to make it three wins in a row and secure their place in the fourth tier of English rugby after promotion 12 months ago.

South Leicester, Chester and Tynedale were also not out of the woods in this relegation battle ahead of this weekend, but all three got their jobs done in fine fashion. Following promotion last season, South Leicester will be plying their trade at this level once again next term thanks to a thumping 40-12 win over already relegated Huddersfield while Chester came away from Preston Grasshoppers with an excellent 22-16 victory and Tynedale became only the second team to beat Leicester Lions at Westleigh Park this campaign as they won 37-29 in the Midlands.

Otley v Harrogate is the late kick-off with the winner of this fixture claiming sixth place in National Two North this season.

Cambridge have been crowned champions of National Two South following a 52-14 win over a Dorking side that have already been relegated to National Three. Before kick-off, the Blood and Sand had just a two point gap separating them and title rivals Old Albanian, but the men from Volac Park kept their cool to score eight tries on their way to the title.

With Rowland Winter’s men getting the job done, the Old Albanian’s thrashing of bottom club Launceston paled into insignificance. Nevertheless a 14 try rout in this 90-3 win was the perfect preparation for the OA’s ahead of their National Two play-off with Sedgley Park in a few weeks’ time for a place in National One.

Below the title race, Bishops Stortford beat Bury St Edmunds 41-29 at Silver Leys to seal third place while fourth placed Redruth could only manage a 33-33 draw against the Redingensians in a pulsating encounter at the Recreation Ground. Despite not winning, Bury St Edmunds and Redingensians have now achieved top half finishes in National Two South following promotion into this division 12 months ago.

Elsewhere in the top half, Taunton Titians ended their campaign with a 38-31 win over the Old Elthamians and Chinnor came from behind to top off a remarkable turnaround in results to beat already relegated Southend Saxons 45-26 to match last year’s finish of sixth place.

In the bottom-half, Canterbury ran in seven tries to beat Barnes 41-31 and Worthing Raiders made it back to back wins with a narrow 27-26 victory at home to Clifton.

Hartpury College scored 10 tries to beat Hull Ionians 68-21 and secure second place in National One. Before the start of the day, College were level on points with third placed Ampthill & District and point clear of Blackheath, but they were able to end a great season on a high with this comfortable win.

Ampthill and District ended their campaign in fourth place despite beating Esher 20-13 at Dillingham Park. The A’s, who were promoted into this division via the National Two play-off last year, will be very pleased to have had such a successful season despite missing out on a top three finish.

The reason for that was because Blackheath thumped Blaydon 45-17 in their final game at the Rectory to leapfrog Ampthill into third place. This was the perfect conclusion to the campaign for Club and an excellent way for club legend David Allen to end his time with Blackheath after 12 seasons with the side.

Elsewhere in National One, Plymouth Albion came from 32-21 down to beat champions Richmond 40-39 in an enthralling game at the Athletic Ground. Richmond end their time in National One with two defeats while Albion, despite their off the field problems, have performed superbly in the second-half of the season and possess the talent to push up the table next term.

Rosslyn Park finished the 2015/16 campaign in fifth place following a 31-12 win away at already relegated Henley Hawks while Darlington Mowden Park rounded off a brilliant campaign for themselves with a 52-22 win over Cinderford – who will also be joining Henley in National Three next year.

Loughborough Students ended another year in National One with an impressive 57-7 victory over Fylde while Wharfedale bowed out of the third tier of English rugby following a 38-34 win over Coventry.