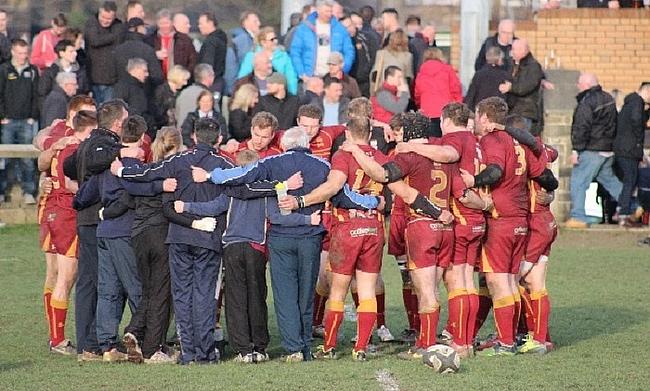 Sandal became the third and final team to be relegated from National Two North as their defeat to the Luctonians sees them drop back into National Three after just one season at this level.

It was a fight for survival that had gone down to the wire in National Two North. Five teams were all in danger of the drop heading into the final day of the season, but only one would fall through the trapdoor.

Before the start of play, it was Sale FC who occupied the final relegation spot in the division and they were level on points with Sandal who were a place above them in the table. Ahead of both of those sides were South Leicester and Chester who were a point clear of Sandal and Sale FC while Tynedale were began the day three points ahead of the relegation zone.

And the worst scenario happened for Sandal as all four sides involved in the relegation dogfight with themselves won while the Yorkshire side slumped to defeat which sealed their fate.

Elsewhere in National Two North, champions Macclesfield returned to winning ways, Sedgley Park are ending the season strongly ahead of their play-off match while Harrogate picked up a win over Otley.

Matthew King was one of seven players to score for newly crowned champions Macclesfield as they beat Stourbridge at Priory Park.

Matthew Thorp’s early try was added to by Matthew O’Regan and King before half-time as the hosts opened up a 19-0 lead at the break.

James Othuha’s score for Stourbridge just after half-time was cancelled out immediately by Macc’s Jordan Brooks, but the Stour centre dotted down again to make the score 26-14.

Elliot Brierley and Ashley Elvers then exchanged tries before Rhodri Mayor and Thomas Eaton’s efforts made sure of the home victory.

So, as we know already, Macclesfield will be plying their trade in National One next season after clinching the title and promotion two weeks ago while Stourbridge have ended this campaign in fourth following a strong term. The Midlands side will be looking to build on this and push for promotion next year.

Sedgley Park ran in five tries to defeat already relegated Broadstreet at Ivor Preece Field as they now prepare for their National Two play-off against the Old Albanian.

The Tigers have one more league game before their crunch match with the OA’s, but this victory was perfect preparation for Dean Schofield’s men ahead of that huge tie.

A brace from Andrew Riley plus scores from Matthew Lamprey and Jonny Matthews saw Sedge wrap up the bonus-point before the break. James Harrison’s try was the only response Broadstreet could muster up.

Stephen Collins added to his sides’ try tally on 63 minutes to seal a comfortable win for Sedgley who take on the Old Albanian on May 14th.

Tynedale secured their place National Two North next year after a bonus-point win against a strong Leicester Lions side.

A dominant 27 minutes before the break proved decisive as Nicholas Cairns, Ashley Smith, Graeme Dunn and Daniel Marshall all crossed for tries for the away side.

Leicester Lions then fought back after the interval as Devon Constant added to his first-half score by completing his hat-trick and that was swiftly backed up by a try from Oliver Povoas to make the score 31-24 to Tyne heading into the final 10 minutes.

Robert Parker eased any nerves the north-east side may have had with his second penalty of the afternoon, but when George Nairn powered his way over four minutes from time for Leicester, the pressure was on Tyne to hold out.

And they did exactly that as Parker landed another kick from the tee to seal Tyne’s safety as they became only the second team to beat Leicester Lions at Westleigh Park this season. As for the Lions, it has been a tremendous campaign for them considering they stayed up on the final day of last term and they fully deserve their third placed finish.

The visitors went ahead through two Liam McGovern penalties and they carried that lead into half-time at Paton Field.

Gavin Roberts responded from the tee for Caldy, but scores from Fletcher and Moorhouse stretched Sale’s lead to 13 points heading into the final quarter of this encounter.

Nicholas Royle’s try for the home side then set-up a nervous final eight minutes for Sale, but the men from Heywood Road held on to clinch a remarkable third win in a row and more importantly, book their place for another season in National Two North.

Harrogate have moved up to sixth in the National Two North table following a narrow victory against Otley at Cross Green.

The away side were behind at half-time though as a Michael Coady try and eight points from the boot of Stephen Depledge cancelled out Callum Irvine’s early drop goal and Thomas Harvey’s score.

But tries from Samuel Bottomley and the ever present Lewis Minikin put Harrogate in front just before the hour.

William Rigg then crossed shortly after for Otley to threaten Harrogate’s advanatge, but the men from Rudding Lane stayed strong to clinch the result which takes them ahead of Otley and in to the top six. Added to that, this was a a Yorkshire Cup quarter-final and National Two (North) double-header so ‘Gate are also into the last four of their county competition,

Sandal have been relegated from National Two North as the Luctonians battled to victory at Mortimer Park.

Lucts ran in the only try of the first period as Alex James crossed, but it was the boot of Greg Wood that gave Sandal a 9-7 advantage at half-time as he landed three penalties.

The fly-half added another kick to his tally shortly after the break and could have slotted over a couple more, but saw his kicks sail off target.

Instead, the Yorkshire side were reduced to 14 men when Elliot Munnelly was shown a yellow-card and in his absence, the Luctonians rallied back.

Aiden Cheshire gave his side the lead on 68 minutes with the Lucts’ second try of the game, but even when Sandal returned to their full complement, their hosts blew them away.

Louis Silver and Jordan Street stretched the Luctonians’ lead before a try from William Burton sent Sandal down back down to National Three after just one season at this level.

Take nothing away from Sandal though, it has been an impressive effort from the side promoted via the National Three North play-off 12 months ago. In terms of the Luctonians, everything about them as been superb since the back end of November and now even with their game in end still to play, they have secured a top seven finish thanks to 11 wins from their last 18 games.

Chester secured their safety in National Two North with a gritty win over Preston Grasshoppers at Lightfoot Green.

Chester were just a point ahead of the relegation zone in 11th place before the start of play on Saturday, but Callum Bennet’s early try in Lancashire settled the nerves of the away side.

Lewis Allen then kept Preston in touch with a penalty before the sides exchanged two tries apiece.

Gavin Woods and Michael Craven both crossed for Chester before Ross White was sin-binned for the visitors.

This allowed Preston to hit back and they did so in style as Samuel Gale and Jacob Browne both dotted down. However, Chester had the last laugh of the first 40 as Sean Green darted over to give his side a 22-13 lead at the break.

Allen got Preston off to a decent start after the interval as he landed his second penalty of the afternoon, but that was all the Hoppers could manage as Chester held on to secure a welcome and much needed victory to keep their place in National Two North for another year.

Christopher Gibbs scored a brace of tries as South Leicester avoided relegation from National Two North in style thanks to a bonus-point win over Huddersfield.

Both of Gibbs’ tries helped South into a 26-0 lead at the interval with a Penalty Try and a score from Blane making up the rest of the points for the home side.

And South never looked back after the break as Matthew Cooke and Andrew Gates both crossed while fly-half Ricci Aley took his tally to 10 points for the afternoon as he converted both scores.

Joel Hinchcliiffe and Lewis Bradley reduced the lead, but it was all too little, too late for ‘Field as South survived the drop while Huddersfield bowed out of the division.