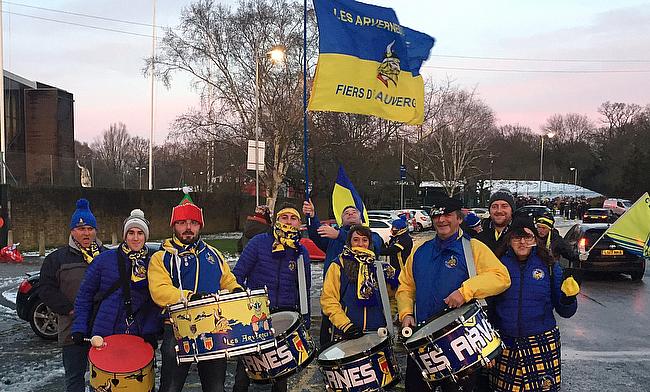 Clermont Auvergne fans were rewarded for their patience
©PA

Alivereti Raka scored a hat-trick as Clermont Auvergne claimed the top position in Pool 2 with a 14-46 triumph over Saracens in the rescheduled European Champions Cup face-off on Monday.

The game which was originally scheduled for Sunday was postponed to the next day due to adverse weather conditions and it was the French side, who dominated with a six-try performance with three of it coming from Raka.

It was Raka, who gave the visitors a head start as he powered through Jamie George in the 12th minute to score the opening try with Morgan Parra slotting the conversion to make it 0-7.

The French side soon tripled their lead and it was once again Raka, who went past the Saracens' defence to go past the line in the 20th and 24th minutes to complete the second fastest hat-trick in Europe. By the time Raka completed his hat-trick, Saracens had missed a startling 16 tackles.

Saracens replied with a penalty try awarded from a line-out drive, but when Parra added to his three conversions with a penalty they trailed 24-7 and faced a mountain to climb having proved unable to capitalise on Lee's sin-binning.

Raka's good form continued in the second half as well and almost scored his fourth before finally being caught but still, he did well to flip one to Flip van der Merwe to bring the visitors' fourth try. Failed tackles continued to haunt Saracens and this time Juan Figallo and Jackson Wray were at fault as Fofana skipped over for the visitors' fifth before Parra broke the 40-point mark with a penalty.

George Kruis scored a consolation try for Saracens in the 73rd minute but three minutes later Isaia Toeava crossed over for Clermont Auvergne as they completed a 32 point victory that takes them to the top of Pool 2.