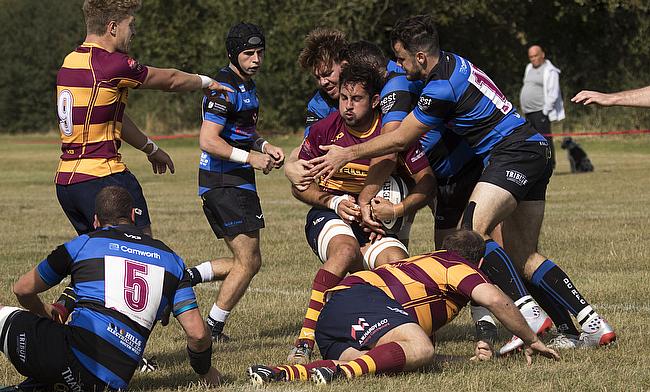 Westcliff have lost all five games, but only one has been by a margin of more than seven points
©Alan Browne

Westcliff and Bournemouth are still searching for their first wins of the National Two South campaign, but something has got to give when both sides clash in Round Six.

Bournemouth are the only club in the division without a point to their name so far and the Lions parted company with Director of Rugby Will Croker before last weekend’s defeat to Old Albanian.

Richard Sharp and Jon Sanchez will be in charge for this Saturday’s clash with Westcliff and both teams will be craving their maiden victory of the season at Chapel Gate.

At the summit of the division, Tonbridge Juddians have secured five bonus-points wins in a row and number six will be in their sights when they visit Worthing Raiders this weekend. Second-placed Henley Hawks are five points behind TJs and they host Redruth on Saturday whilst fellow promotion candidates Taunton Titans entertain Old Albanian.

Elsewhere, Clifton and Old Redcliffians meet in an all-Bristol affair and Esher go to Sutton & Epsom whilst Bury St Edmunds take on Dings Crusaders and Leicester Lions welcome Barnes to the Midlands.

January 5th. That was the last time Tonbridge Juddians lost a National Two South game. The current league leaders have won 18 matches in a row, five of which have come this season but Peter Dankert’s side faced a tough test against Taunton Titans last weekend. However, it was business as usual for TJs as they maintained their perfect start to the campaign.

One of those quirks in the fixture list has seen opponents take on second placed Henley Hawks before coming up against Tonbridge Juddians so far this term and Worthing Raiders are currently in the midst of this. The Raiders were thumped by the Hawks last week and this will also be an extremely tough task against the table toppers in Round Six. However, can Worthing become the first side to beat TJs in over eight months or will they be brushed aside?

Henley Hawks’ Round Five thrashing of Worthing Raiders lifted Nigel Dudding’s side back into the top two after slipping to their first loss of the season at the end of September. The Hawks’ campaign is back on track and they will want to stay on the coattails of league leaders Tonbridge Juddians by defeating Redruth this weekend.

After their frustrating home defeat to Barnes a couple of weeks ago, Redruth have bounced back in excellent fashion. A superb away win at Worthing was followed by a dramatic victory over Dings Crusaders as the Reds secured back-to-back wins for the first time since March. Now they will be eyeing the scalp of Henley Hawks, but Redruth will be aware their hosts haven’t been beaten at Dry Leas since January.

After facing both Tonbridge Juddians and Henley Hawks, Taunton Titans will be carrying mixed emotions into their Round Six clash with Old Albanian. Tony Yapp’s side produced an excellent performance to defeat the Hawks, but were very much second best against TJs last weekend so now they will be eager to return to winning ways at the first attempt.

The Titans are level on points with second-placed Henley and on Saturday, they welcome an Old Albanian outfit who picked up a victory against Bournemouth in their last outing. OAs have now won all three of their home fixtures so they will be keen to translate that form into their displays on the road, but a visit to the Towergate Stadium will not be easy for James Osborn and James Buckland’s side.

It is the second Bristol derby of the campaign when Clifton visit Old Redcliffians this weekend and the visitors will be aiming for another victory against one of their neighbours. The Lavender and Blacks defeated Dings Crusaders in Round Two, which was one of their four wins so far this season. Matt Salter’s side sit in fourth place as things stand and they are only two points off the top two after a strong start to the season.

https://t.co/EHTUXYhJ9l This week's try of the week comes from National 2 South's @cliftonrugby, where a box-kick is returned with interest through a scything run and some neat hands ending with Henry Harper dotting down #Nat2S pic.twitter.com/lrEkOo2IqF

Clifton did the double over Old Redcliffians last term so the hosts on Saturday will have a point to prove. Alex Davies’ side also come into this clash with some confidence behind them after successive wins against Old Albanian and Westcliff. Old Reds haven’t won an all-Bristol affair since January 2018 so they will be eager to set the record straight at Scotland Lane.

Esher’s start to life in National Two South has been solid so far with three wins from their first five matches and they will see Saturday’s meeting with Sutton & Epsom as a chance to continue their good form. Peter Winterbottom’s side do sit in fifth place and are only five points behind the top two so they will be satisfied with how things have gone so far considering a new squad is still gelling.

In Round Six, they take the half an hour trip to Rugby Lane to face a Sutton & Epsom side who are starting to find their feet at this level. A last-gasp win over Westcliff was followed by an encouraging performance in defeat against Clifton last Saturday where the Black and Whites secured two bonus points. Jeff Parsons’ side will now be relishing the prospect of facing one of their old foes once again as they aim for successive home wins which could lift them out of the early relegation places.

Their 12-10 win over Barnes stretched Bury St Edmunds’ positive recent form to three wins from their last four games. It was far from pretty, but the Wolfpack left the capital in high spirits and they will be keen to continue their purple patch when they host Dings Crusaders in Round Six.

Dings will head to Suffolk desperate for a reaction after a punch in the stomach last weekend. In a tight game against Redruth, Fraser Honey’s late penalty snatched a share of the spoils away from the Crusaders so the Bristol-based club will be keen to bounce back as quickly as possible. To do that, they will have to secure their first away victory since the opening day of the season.

Their first defeat in four matches saw Leicester Lions fall from fourth place to midtable in National Two South. The Lions lost narrowly to Esher, but Gareth Collins and his side won’t be too disheartened by their start to life at this level. The Midlands club will now look to dust themselves down and respond immediately when they host Barnes this weekend.

The visitors to TMDP Park were also on the wrong end of a tight scoreline in Round Five. Barnes were outplayed by Clifton in the final match of September, but began this month with a much-improved performance against Bury St Edmunds. The London-based club did fall to a defeat, but there are positives for Joe Gray’s side to harness as they prepare to travel north in Round Six.

Westcliff’s near misses will be incredibly frustrating, but also very encouraging for Rick Compton and Jacob Ford. Westcliff have picked up the joint highest amount of bonus points (5) so far this season, but four of them have been losing bonus-points. The Southend-on-Sea club seem to be on the cusp of securing their first ever National Two South victory and this weekend could provide a golden opportunity for Westcliff to break their duck.

They visit fellow newly-promoted side Bournemouth in Round Six and the hosts parted company with Director of Rugby Will Croker last weekend. Croker wasn’t in charge for the Lions’ defeat at Old Albanian, but taking over the reins at Chapel Gate will be Richard Sharp - who has been appointed on an interim basis - and he will work alongside coach Jon Sanchez. Like Westcliff, Bournemouth are still searching for their first win of the season and after a tough week for the club, victory on Saturday would offer a much-needed boost.