Premier South A title to go to the wire 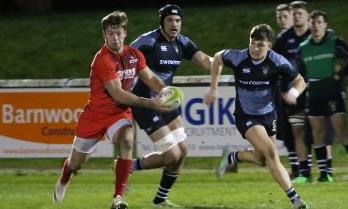 The race for first spot in Premier South A has rumbled on all year and there really has been only two likely candidates in Exeter and Hartpury College. Now, the title is set to go the final day with Exeter topping the table by a point.

They thrashed the University of South Wales on Thursday to retake top spot from Hartpury College meaning the two sides head into the final week of the domestic season pretty much neck and neck. Exeter take on Bath in the South-West derby at Sandy Park while Hartpury take on Cardiff in their rearranged match.

Away from Premier South A, Loughborough made it 11 wins from 11 in Premier North A while Durham’s chase for a second place finish is still on after victory over Newcastle.

Elsewhere, it was cup action this week across BUCS with five of our featured teams progressing to the next round of their respective competitions.

After winning the league title two weeks ago, Loughborough University’s match against the University of Nottingham was the first time they had played as the newly crown champions and it was easy to see why they have finished top after a commanding 0-36 away from home.

Loughborough weren’t in action last week as their game against the University of Leeds was cancelled, but there was no sign of rust from the Midlands side as they secured win number 11 from 11 league games this season.

A first half try from Brandon Mandivenga and five points from the boot of Mark Dixon gave Loughborough a 0-10 half-time lead before Luke Frost, Sam Harry and Ryan Redman sealed a sixth bonus point of the campaign for the away side.

There was a moment when the game had to be moved to another pitch, but that didn’t disrupt Loughborough’s rhythm as Richie Lewis put the icing on the cake for the champions who have now hit the 50 point mark for the season.

Nottingham’s fate was already sealed before their final game of the season and they know they will have to fight for their Premier North A status in March against the winner of Premier North B which is looking like it could be Loughborough’s 2nd XV.

Durham University are still on course to finish second in Premier North A after easing past fourth placed Newcastle University 27-0.

Despite a cagey start, Durham were given the upper hand after Newcastle’s prop was sent off and took the initiative as they led 10-0 at the break.

After the restart, the home side scored three well worked tries to give them the bonus point win which leaves Durham just four points behind Leeds Beckett with a game to play.  As for Newcastle, they also have one more game to play this season, but already know that they will join Durham in the play-offs after six wins this term.

In the final game in Premier North A this week, Northumbria University ended their season with a 29-29 draw against the University of Leeds.

The game was moved from Bradford to Darlington Mowden Park’s stadium overnight, but that change didn’t affect the players’ mind-set as they played out a superb game of university rugby.

The new hosts led 12-10 at half-time before extending their lead soon after the interval. Rory Simpson clawed Leeds back into the contest but Northumbria pulled clear once again with another try.

But the away side weren’t going to give up that easily and made the score 24-26 with a try but yet again, Northumbria extended their advantage; this time from the tee.

However, it was Leeds who had the final say to clinch a draw as they touched down in the corner, but couldn’t nail the conversion from a tight angle to steal the victory.

Northumbria have ended their season with two wins and two draws from their 12 matches, but they may not finish fifth in the table as Leeds could leapfrog them if the Yorkshire outfit were to beat Loughborough next week.

The new league leaders were ahead 0-36 at half-time and then ran riot in the second 40 to retake first spot off Hartpury College heading into the final round of matches in the domestic season. As for USW, their place has now been confirmed in the relegation play-off after this defeat having played all 12 of their games.

USW have won just once since promotion from Premier South B and will be fighting for their status in the top flight in March.

Elsewhere, the University of Bath managed a last gasp 3-3 draw against Cardiff Met which means they will set up a quarter-final with either Durham University or current holders Leeds Beckett in the Championship Finals.

Their last minute penalty secured them third place in the table and Coach Aaron James said: “The score line didn’t really reflect the game! The conditions were terrible hence the score line, but we played OK in parts, but there is still room to improve.

We have picked up some injuries yesterday heading into the big game against Exeter at Sandy Park. It will be and has been a spectacle at that is our main focus before the quarter-finals.

“To finish third is great because we have ended up fourth in recent years, but we want to say want to finish the season with a win and take that in the quarter-finals against either Leeds Beckett or Durham.

As for Cardiff Met, they finish the season fourth with six wins to their name and will join Bath on the road to Twickenham.

Before we dive into the cup action involving sides in Premier North B, the University of St Andrews and the University of Birmingham were in league action on Saturday and it was Birmingham who came out on top as they secured their second league win in a row after a 27-39 victory up in Scotland.

That result leaves Birmingham 13 points clear of the drop and they know one more win from their remaining three matches will guarantee them safety in Premier North B. As for St Andrews, they are nine points adrift at the bottom of this division with three games remaining. It’s looking bleak for the Saints.

There was more joy for Birmingham on Wednesday as they beat the University of Sheffield 20-7 in the BUCS Trophy Round of 16 match which means they have set-up a quarter-final tie with fellow Premier North B side Bishops Burton.

Bishops Burton are currently second in Premier North B and promotion looks out of their reach, but a piece of silverware certainly doesn’t. They beat Scottish 1A side the University of Glasgow 24-3 and their last eight showdown with Birmingham will take place next week.

Third in Premier North B are Nottingham Trent University, but they were beaten by Northern 1A leaders Durham 3rds 24-10 at Maiden Castle in the Round of 16. Trent have finished third in the league and their cup run has now ended, while Durham 3rds’ fantastic season continues. They will host Edinburgh 2nds next week who beat Midlands 1A table toppers Loughborough 3rds 3-12 in the Midlands.

Other than Durham 3rds, there were no sides from Northern 1A on cup duty this week meaning there were two scheduled league matches on Wednesday.

However, once again, Liverpool University’s fixture with the University of York was postponed. Liverpool haven’t played since January 27th against Durham 3rds when they lost 13-37.

Also, the University of Hull's match against  Manchester Met just before kick off due to standing water.

Third placed Warwick did find themselves 20-0 down at one stage, but fought back to move to within eight points of Loughborough having now played the same amount of games as the league leaders. As for Leicester who sit second in the division, they failed to back up their win over Harper Adams last week as they remain six points behind Loughborough having played a game more.

Fourth placed Harper Adams University are now just a point behind Leicester after their 18-3 victory over Oxford Brooks University. This was a great response from Harper Adams after defeat to Leicester nine days ago and they are now seven points behind the leaders. Oxford Brooks still occupy the final spot above the drop zone, so their ninth defeat of the season is certainly a major setback.

Top of Northern 2A and on course for an immediate return to Northern 1A after a 100 per cent season so far, Lancaster University are now through to the semi-finals of the Northern Conference Cup after an impressive 65-5 win over Liverpool John Moores.

In the Midlands conference cup, Midlands 2A leaders Nottingham Trent 2nds will take on Northampton University 1sts in the semi-finals after a 34-0 win over Nottingham Trent 4ths. Trent 2nds are four points clear at the top of the league and cup semi-final has now been added to their excellent season thus far.