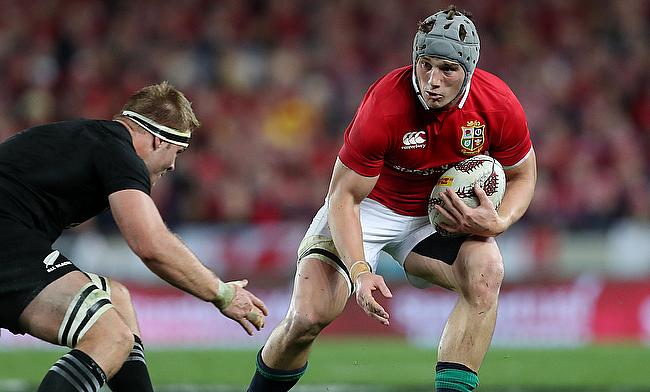 As the British and Irish Lions tour of New Zealand ended in a 1-1 draw, we take a look at the how the visiting players have fared in the series.

LIAM WILLIAMS: Created one of the greatest tries in Lions history when he attacked from deep in the first Test. He also made mistakes, but he is a thrilling counter-attacker. 7 /10

LEIGH HALFPENNY: Unlike in Australia four years ago, was more of a bit-part player this time round. Did not start a Test. 6

STUART HOGG: The Scotsman's tour was ended when he suffered a freak injury during the Crusaders game when team-mate Conor Murray's elbow caught him in the face. 6

ANTHONY WATSON: A wonderfully-elusive runner who was a handful for the New Zealand defence in all three Tests. Exciting to watch. 8

ELLIOT DALY: Enhanced his reputation by breaking into the Test team and starting all three All Blacks clashes. Also kicked a brilliant long-range penalty in the decider. 8

JACK NOWELL: Started the tour slowly, but he had his moments as it progressed. On the bench for second and third Tests. 6

GEORGE NORTH: Failed to make a mark and fell well below the blistering standards of his Lions tour to Australia four years ago. 5

JARED PAYNE: Hampered by injury and then migraine trouble, meaning he was never able to hit top gear. 6

JONATHAN DAVIES: A magnificent tour in attack and defence. Won the Lions players' player award, and impossible to disagree. Outstanding. 9

JONATHAN JOSEPH: Could not hit the heights that he regularly manages with England. Some strong attacking moments, but also exposed in defence at times. 5

ROBBIE HENSHAW: Travelled to New Zealand with his expectation, but things did not materialise, and then he suffered a tour-ending injury in the Hurricanes game. 5

OWEN FARRELL: Won the second Test and drew the third with his nerveless penalty kicking. Rock-solid temperament, although he was sometimes prone to making wrong decisions. 7

JOHNNY SEXTON: The Ireland fly-half worked well with Farrell at inside centre, and gave the Lions options with his game-management skills. 7

DAN BIGGAR: Had to settle for a midweek team role, but the Wales number 10 never let his head drop and provided a strong presence throughout. 7

RHYS WEBB: Quick and with an eye for a gap, he understudied Murray strongly and was an excellent squad player. 7

GREIG LAIDLAW: Never really got going, and while an important midweek performer, he did not stand out. 5

MAKO VUNIPOLA: The England prop delivered some dominant displays in the tight and loose exchanges. All-action and aggression, he stepped up to the plate. 8

JACK McGRATH: Ireland's young loosehead prop did not put a foot wrong, and looks to have a glittering Test future ahead of him. 7

JOE MARLER: A mainstay of the midweek team, Marler consistently put in a shift as the Lions often had to dig deep. 7

TADHG FURLONG: A scrummaging rock for the Lions, he performed with a maturity beyond his years. Already approaching world-class status. 8

KYLE SINCKLER: The young England forward was over-exuberant at times, yet he also offered a great deal around the field. A rich learning experience. 7

DAN COLE: Like Marler, did not show any outward sign of disappointment at missing out on the Tests, doing his job diligently and professionally. 7

KEN OWENS: The Wales hooker found consistent levels throughout the tour when was called upon. Commanded respect. 7

RORY BEST: The most-used player as midweek captain, the Ireland skipper was a motivational presence on and off the pitch. 7

MARO ITOJE: England's 22-year-old lock went up another gear with the Lions. Relished the big occasions and taking on New Zealand's revered forwards. 9

COURTNEY LAWES: Bristled with pace, power and aggression, and richly deserved a place in the Test match-day 23 on two occasions. 7

IAIN HENDERSON: Arguably the player most unlucky not to feature in a Test. Terrific work-rate, superb ball-carrier and quality set-piece exponent. 8

GEORGE KRUIS: Started the first Test, but had a poor game and then drifted out of the match-day 23 behind Itoje, Jones and Lawes. 5

SAM WARBURTON: The Welshman's second tour as Lions skipper saw him lead from the front in impressive fashion. Combined quality leadership on and off the pitch with performances to match on it. 8

PETER O'MAHONY: Captained the Lions in the first Test, but then made way for Warburton's return in Wellington. Strong, solid tourist. 7

SEAN O'BRIEN: A dynamic operator was arguably the glue of the Lions Test pack. Uncompromising and physical, he also scored an unforgettable first Test try. 8

CJ STANDER: Had his moments, and was on the bench in Tests two and three. Solid, rather than spectacular. 7

ROSS MORIARTY: His tour ended early through injury, denying him the chance to stake a claim for Test recognition. 5

JAMES HASKELL: Played his part largely on the midweek stage. A character whose infectious enthusiasm was important. 6

TAULUPE FALETAU: Showcased his ability as a world-class number eight. Just got on with his job, and he did it brilliantly. 8