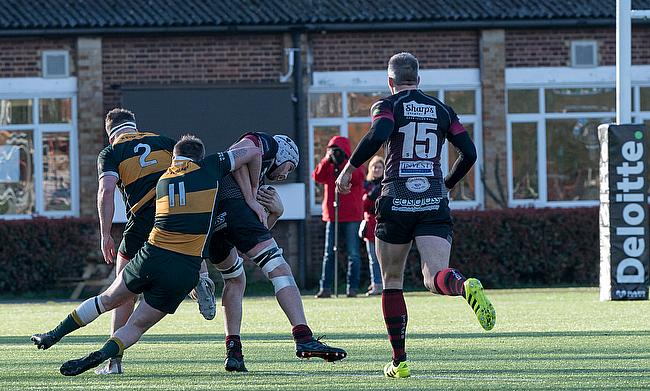 Despite the eternal optimism of the preview on Friday, there were in fact four NCA fixtures postponed over the weekend. In National 1, Cinderford’s trip to Bishops Stortford was called off, in the North, Sheffield Tigers called off their game with Tynedale and in the South, Esher and Leicester Lions postponed their home games against Worthing and Sutton & Epsom.

At the top of National 1, Richmond have extended their lead at the top of the table to ten points. Beating Canterbury 27-10 at the Athletic Ground, tries came in from former Hartpury man Tom Pashley, Jimmy Litchfield, David Banfield and Hamish Graham helping secure a bonus point victory.

The West Londoners have been allowed to extend their lead at the head of the third division thanks largely to Chinnor. A late try from hooker Nick Selway gave Chinnor the win over title hopefuls Rosslyn Park. Trailing at the break, Park had two men put in the sin-bin late on, allowing for some late forward dominance by the home side and a good 24-21 win for Matt Williams’ side.

Blackheath picked up a good win against Cambridge. In difficult conditions, Nick Foster and Alex Pickersgill dis cross the whitewash for Club, Mark Cooke kicking one of his two conversion attempts. Cambridge’s only points came from the boot of Ben Penfold, meaning that Blackheath won 12-3.

Rotherham Titans picked up a losing bonus point against Rams, leaving them five points adrift of a Birmingham Moseley side who lost against Plymouth Albion in the second city, 14-26. In the middle of the pack, Darlington Mowden Park beat Sale FC 34-15 at the Darlington Arena and Old Elthamians got a 26-6 bonus point victory on the road away to bottom side, Hull Ionians.

?? Have you recovered yet from yesterday's exciting finish at Kingsey Road?

For league leaders Caldy it was business as usual for the league leaders, winning their 24th game in a row in National 2 North. Now sat on 114 points, the side picked up another bonus point victory, this weekend beating Scunthorpe 103-0, putting 17 tries past their visitor as the Wirral sides’ march back to the third division continues uninterrupted.

In second, Fylde have left the door open to Hinckley in the race for the play-off spot. Going on the road to Loughborough Students, Warren Spragg’s side succumbed to a 32-30 loss on Epinal Way. The Lancashire side did pick up a losing bonus point and a try scoring bonus point, meaning that the gap between them and third-place Hinckley is four points.

Whilst on the topic of Hinckley, they remain in good form, picking up a hard-fought win at home to Wharfedale, tries coming from Henry Povoas and Adam Johnson, with two Joseph Wilson penalties and a penalty enough to secure a 17-7 win at De Montfort Park.

Sedgley Park have fallen away from the play-off race some more. Losing to Caldy the weekend prior, Scott Barrow’s side lost 22-13 away to Luctonians in Herefordshire over the weekend. Going into the break as 7-13 winners, a second half penalty try, unconverted score from Callum Young and penalty from Louis Silver meant victory for the West Midlanders.

Elsewhere, Chester subjected Preston to a 27-14 loss in what has been a disappointing season for Paul Arnold’s side. Finally, Hull convincingly overcame Otley in a Yorkshire derby, beating their near neighbours 20-14 in a closely contested game on the Humber.

Tonbridge Juddians moved top of the National 2 South table over the weekend, thanks to results going their way, as well as their very own 19-12 win away to Westcliff. The hosts went ahead early, Myles Bean having his try converted by Jacob Ford. However, from that point on it was all TJ’s. Scoring twice through Hugo Watson and once through Matthew Walsh, the four points was enough to move top.

Aided with their move to the top by Clifton beating Henley Hawks 20-10, the Hawks have now moved to third in the league after Taunton went on the road to Barnes, winning 45-10 and springing back into life after a couple weekends in the cold.

Clifton are now just 12 points adrift of top, their win over Henley coming thanks to tries from Bentley Halpin, Luke Stratford and Christopher Levesley and a penalty kick from Bradley Barnes. Taunton scored seven tries away to Barnes, dominating from start to finish in London as Tony Yapp’s men hope to finally escape National 2.

In fourth place, Redruth also remain hopeful of potentially breaking into that top two. Currently five points adrift of Taunton in second, the Cornish side kept the ball rolling over the weekend, subjecting Old Albanian to a 21-12 loss at the Recreation Ground, the boot of fly-half of Fraser Honey largely to thank for the result.

Bottom side Bournemouth were subjected to a heavy defeat at the hands of Dings Crusaders, the home side putting over a half-century of points past their rivals. Old Redcliffians were unable to overcome Bury St Edmunds, who scored 10 tries, but Alex Davies’ team could collect a try-scoring bonus point.