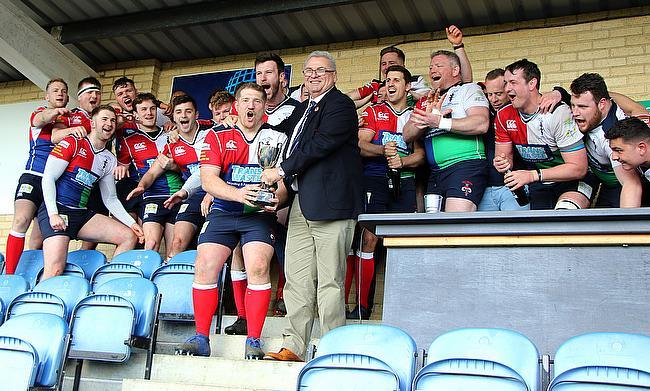 The dust has now settled on another wonderful season in the fourth tier of English rugby and there was no shortage of drama in both National Two North and National Two South.

We take a look back on the campaign in both divisions and reflect on some of the key battles throughout the course of the term.

Trying to immediately bounce back into National One was always going be a job, and at one stage during this season it looked as if Hull Ionians were going to let their excellent start to the season slip away from them. Eleven wins from their first 12 games left them in a strong position in the promotion race, but five defeats from nine matches over the Christmas period threatened to derail their title bid.

However, Martyn Wood’s side regrouped and eight victories from their remaining nine fixtures saw them clinch the National Two North crown at the first time of asking. The I’s finished the season on 113 points, just four clear of second-placed Chester.

After a couple of seasons of finishing away from the promotion battle, Chester took the next step this year and deservedly ended the campaign in second spot. They did push Hull Ionians all the way and despite defeat in the National Two play-off against Canterbury at the beginning of this month, this was a massively positive season for Jan van Deventer’s men.

Matt Bebbington’s second season in charge of Sedgley Park will be his last after deciding to join Sandbach next year, but the Tigers have been superb during his tenure. At Christmas, ‘superb’ wasn’t a word associated with Sedge as last year’s National Two North runners-up had had mixed opening half of the season, but nine straight wins from the start of February helped the men from Park Lane conclude the term in third spot. A top four finish will certainly be their number one goal for next season.

Whilst Sedge’s storm towards the top two may have come too late, Huddersfield and Fylde were two clubs who were embroiled in a promotion battle for large chunks of the season. At the end of February, Field were holding all the cards as they had a game in hand over some of their rivals, but a run of four defeats proved to be costly despite making a recovery towards the end of the season.

Similarly, for Fylde, they found themselves in a very strong position towards the end of March and they entered a crucial fixture with Chester in excellent form. However, four losses on the spin ended their hopes of an instant return to National One, but Warren Spragg’s side will be contenders next season as they possess a very exciting squad at Woodlands.

Now for some notable mentions in National Two North. We start with Otley who were in the mix for a potential top two finish for a sustained period during their strong season while Tynedale also had a very successful campaign under the stewardship of Ben Woods.

Preston Grasshoppers performed superbly after promotion from North Premier last year to finish in seventh place whilst Wharfedale managed to steer clear of any relegation trouble this time around to end the campaign in eighth.

Coach @andyappleyard85 discusses the vision for next season for #maccrugby see the full interview and @SouthRfc match highlights on our Facebook page or via their link to our YouTube channel https://t.co/eWF5U1bRoX pic.twitter.com/q8AeYOrR3R

In terms of the drop, there was rarely much movement as Peterborough Lions, South Leicester and Macclesfield all said goodbye to the National Leagues. The Lions, who earnt promotion last year, found life tough in the fourth tier and they only managed four wins all season while for South and Macc, their respective stints at this level came to an end.

Both sides won on just seven occasions this season and long streaks without a victory saw them slip into the bottom three and neither team could recover. South’s four year stay in National Two North is over whilst after competing in National One in 2017, Macc will now be aiming to rebuild in the fifth tier.

Well, what can you say about National Two South champions Rams RFC. They blew the competition away in 2018/19 and went on a run of just one defeat in 21 matches, which included a total of 17 consecutive wins between September and February.

The title was pretty much wrapped up at that point and while they suffered a setback against Tonbridge Juddians in Round 22, they clinched the crown at the beginning of April against Clifton. The Rams did finish the season with 28 wins and a staggering 139 points to their name.

Second-placed Canterbury finished 18 points behind the league leaders, but this was also an historic season for Andy Pratt’s side. The City Men started the term positively with four wins from six matches, but with Rams in a ruthless frame of mind, it became hard to keep up with them.

Attention swiftly turned to second spot and a key victory over rivals Henley Hawks in November strengthen their belief they could claim a play-off place. Defeat to Tonbridge Juddians just before Christmas left Canterbury in third spot and despite another blip against Dings Crusaders in January, the City Men surged towards a top two finish.

Eleven consecutive wins, including another crucial triumph against rivals Henley, secured a play-off against National Two North runners-up Chester and a 19-10 victory at the Marine Travel Ground just under two weeks ago meant Canterbury gained promotion to National One for the first time in the club’s 90-year history.

It may have been seen as a difficult task for Tonbridge Juddians to match their wonderful sixth-placed finish of last season, but Peter Dankert’s side were simply outstanding in 2018/19. It is hard to fathom how TJs didn’t finish in the top two after losing just once in 22 matches this term. They ended the season with 13 straight wins, but it still wasn’t enough to sneak past Canterbury. Nevertheless, this was a mightily impressive campaign by TJs who finished just one point off second place.

Like Tonbridge Juddians, Henley Hawks were also relentless in their pursuit of a top two finish. It was a very encouraging season for Nigel Dudding’s side and they did enter the New Year in second place. However a slow start to 2019, combined with a defeat against rivals Canterbury in March, did prove to be Henley’s underdoing but this is a side more than capable of challenging for honours next season.

Mentions to Taunton Titans, Clifton and Barnes must also be highlighted too. The Titans racked up another century of points in this division and did challenge for promotion for a large portion of the season whilst despite ending the campaign 30 points behind Taunton, sixth placed Clifton achieved their best finish for four years in National Two South.

In addition, Barnes also had a very successful term on their return to this level and a flurry of victories to end the season signalled a very pleasing year for Joe Gray’s side.

In the back of their minds, Barnes may have been hoping to avoid any relegation battle this term because they were a newly-promoted team and whilst the London-based side were able to do that, a handful of clubs were embroiled in a fight to beat the drop.

In the end, Worthing Raiders, Old Redcliffians and Dings Crusaders were able to stay afloat. The Raiders had experienced a miserable 2019 up until April after just one win in three months, but successive victories over Old Reds, Dings and Taunton helped them finish in ninth spot.

As for Old Reds, seven wins from 10 matches over the winter months was key to their survival and they confirmed their place in National Two South for another season following a thumping win against Redruth in Round 29. In terms of Dings, a very strong first half of the campaign proved to be enough for Luke Arscott’s side as they avoided an immediate return to the fifth tier, despite losing their last four games. Considering the Crusaders finished with just three wins to their name last time they were in National Two South, it has been a pleasing campaign for the Bristol outfit.

Relief for Worthing Raiders as National 2 South status is all but secured https://t.co/sfl0TapMFU

With the aforementioned trio sealing their respective places in the fourth tier, it meant Birmingham and Solihull, Guernsey and London Irish Wild Geese fell through the trapdoor. For Birmingham and Solihull, this campaign was always going to be tough. The Midlands club were moved into National Two South and they did begin the season with a five-point deduction, but Pete Glackin’s side never let that affect them. The Bees’ home form was very encouraging throughout the term and they took their fight down to Round 29 of the campaign, but a defeat against champions Rams RFC ended their adventure at this level.

Guernsey’s fate was confirmed a week earlier as their debut season in National Two South ended in disappointment. The men from Footes Lane created history this time last year by gaining promotion, but a long list of injuries really hampered their progress at this level.

The Raiders, along with London Irish Wild Geese, will be hoping to bounce back next season after the latter saw their three-year stay in National Two South come to an end in March. The men from Hazelwood found it tough to string a strong sequence of positive results together and despite showing snapshots of what they are capable of, London and SE Premier now awaits the club.

Relegated from National One: Loughborough Students, Esher and Caldy