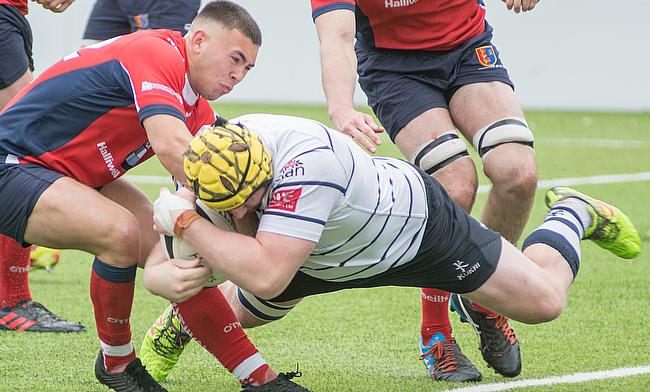 Chester prepared for their National Two play-off with a dramatic win over Preston Grasshoppers on the final day of the season.

Jan van Deventer’s side left it late to rescue a win at Lightfoot Green, but the Cheshire outfit were able to clinch a victory ahead of their clash with Canterbury this coming Saturday.

National Two North champions Hull Ionians concluded the campaign with a narrow win against Sheffield Tigers whilst third place went to Sedgley Park as they held on to beat Huddersfield.

Elsewhere in Round 30, Tynedale drew with Hinckley and Fylde got the better of Otley while Wharfedale eased past Peterborough Lions, Leicester Lions triumphed over Stourbridge and relegated Macclesfield saw off South Leicester.

The I’s held a narrow 10-7 lead at half-time thanks to a converted try and a penalty from Lewis Minikin, only after Greg Mellor had opened the scoring for the Tigers.

Fellow winger Henri Packard gave the hosts the lead once again on 58 minutes, but the away side had the final say as replacement Ben Bell dotted down to seal the victory for Ionians.

Chester snatched a dramatic victory against Preston Grasshoppers as Jan van Deventer’s side head into their National Two play-off with confidence behind them.

Replacement Josh Woods bundled over the line with one minute remaining to clinch the win for the Cheshire outfit, who take on Canterbury for a place in National One on May 4th.

Alick Croft and Michael Craven had scored in the first-half for Chester to give them a 12-0 lead at Lightfoot Green.

It was a winning end to the league campaign for @RUFCChester https://t.co/Gn3CR26QvO

Tom Davidson’s penalty for Hoppers was quickly cancelled out by David Ford’s try, but the hosts then surged back into the contest.

Luke Proctor and Matt Lampery both crossed for Preston before two penalties via Davidson gave the home side the lead.

However, there was to be a late twist as Woods snatched the win for Chester as the men from Hare Lane secured their sixth victory from their last seven matches.

Sedgley Park completed the National Two North season in third place as they secured a ninth straight win against Huddersfield, despite ending the game with 14-men.

Sedge’s Mark Goodman was sent off with nine minutes remaining, but Matt Bebbington’s side were able to see the game out in testing weather conditions at Park Lane.

The first-half belonged to the hosts as they led 22-0 thanks to scores from Rob Holloway, Matt Riley and Ollie Glasse while Steve Collins kicked seven points.

Field sparked into life after the interval as Guy Borrowdale and Richard Piper crossed, but after Goodman’s dismissal, the away side could only manage a drop-goal from Chris Johnson as Sedge held on for the victory.

Callum Dacey snatched a late try on the final day of the season as Hinckley came from behind to draw with Tynedale.

Hinckley started the brighter as Alex Salt and Rory Vowles both scored, but a late flurry before the break allowed Tyne to draw level following scores from Joe Mills and Chris Wearmouth.

Match Report from Saturday's 1stXV match against Hinckley @Hinckley_Rugby can be viewed on Club's Website:-https://t.co/ALqlimCwvt

It was a role-reversal after half-time as Tyne moved in front as Will Roberts and Will Montgomery crossed for the home side, but it was Hinckley’s turn to muster up a response.

Ryan Hough darted over on 73 minutes and the Hornets capitalised on a yellow-card shown to Will Miller as Dacey crossed the whitewash to tie the game up.

The try-scorer was unable to snatch the win from the tee as both sides concluded the campaign with a share of the spoils.

Fylde ended the National Two North season on a high as they beat Otley to halt a run of four straight defeats.

Bevan Rodd’s early try put the visitors ahead, but Otley provided an almost instant response as Ben Smith landed a penalty to make it 7-3.

That’s how the scoreline stayed until deep into the second-half as Tom Carleton made sure of Fylde’s win with a try six minutes from time.

Wharfedale secured a top eight finish in National Two North as they comfortably beat Peterborough Lions at the Avenue.

Ken Houghton’s try after five minutes put the host ahead before Rian Hamilton and George Hedgley touched down to give Dale a 15-0 lead.

Joe Altham and Will Lawn added further tries in the second half as the Greens completed a very pleasing campaign in style.

Leicester Lions rounded off the National Two North campaign with a Midlands derby triumph after a late win over Stourbridge.

A try from Mark Harrison and a second score for Chris Scott put Stourbridge 17-10 up just after the hour.

However, Alex Wilcockson latched on to an excellent pass from Devon Constant to bring the Lions back into the contest and the latter completed the turnaround on 77 minutes as he raced over.

The hosts had trailed 10-7 at half-time as Oli Taylor’s early score was wiped out by Noah Heward and Scott, but a revival in the final quarter enabled the home side to end the season with a victory.

Macclesfield ended a difficult season on a high as they beat fellow-relegated side South Leicester at Priory Park.

Second-half tries from Jordan Simpson, Tom Brand and Myles Hall earned the Cheshire club a seventh win of the campaign.

Dan Glasse’s penalty and a converted try scored by Javiah Pohe had South Leicester leading 10-5 at half-time, with Sam Broster going over for Macc.

However, the hosts turned on the style after the interval as they departed National Two North with a pleasing win.