National One pacesetters fall to defeats 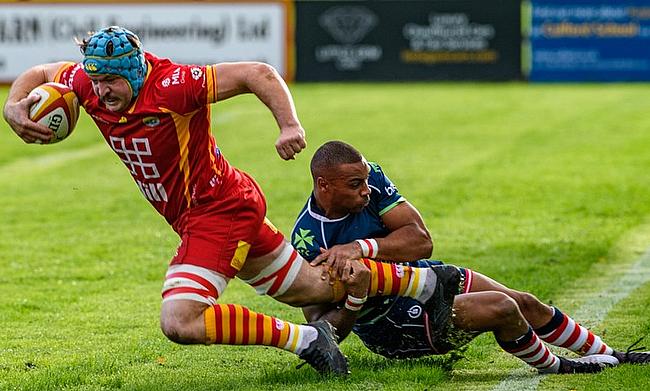 Seven heaven for Richmond, top three look to stay clear and TJs aim to tighten their grip
OEs and Sale FC the pick of the bunch in Round Six
Cambridge and Canterbury looking to ignite campaigns
Richmond record fifth victory to move clear

Round Seven in National One threw up the most intriguing set of results so far this season as some of the early frontrunners in the division all tasted defeat.

League leaders Richmond lost their first game of the campaign as Cinderford produced a remarkable fightback to snatch a victory at the Athletic Ground, but Steve Hill’s side remain at the summit as the teams directly below them failed to capitalise on their misfortune.

Second-placed Rosslyn Park lost to Cambridge whilst Rams were beaten by Blackheath at Well Hall. Chinnor and Old Elthamians, who began the day in the top five, also suffered defeats against Rotherham Titans and Darlington Mowden Park, respectively

Birmingham Moseley were one of the teams to profit as they lifted themselves up to fifth place in the table following their victory over Canterbury whilst elsewhere in National One, Plymouth Albion defeated Sale FC and Bishop’s Stortford came from behind to clinch a stunning win over Hull Ionians.

National One league leaders Richmond suffered their first loss of the season as Cinderford once again left it late to snatch victory.

The table toppers had won all six of their league fixtures before welcoming Cinderford to the Athletic Ground, but for the fourth time this season, Paul Morris’ side were able to clinch a win right at the death.

Only managed to sneak the win in a tight game against a quality @RichmondFC1861 pic.twitter.com/2WfXSNLuje

Richmond’s Jimmy Litchfield and Cinderford’s James Elliot swapped tries and the hosts may have thought they had won the contest with five minutes remaining when Toby Saysell barged over.

However, Cinderford produced a dramatic finish yet again as two close-ranged scores from Nathan Taylor sealed a victory for the Gloucestershire outfit who are now up to fourth in the table.

Cambridge produced an excellent display to earn their first home win of the campaign as they overcame second-placed Rosslyn Park.

Matt Hema, Lawrence Rayner and Joe Green crashed over in the first half for the home side as they held a 24-6 advantage.

The visitors’ only points in the opening 40 came via the boot of Greg Lound, but they pulled themselves back into the contest when Craig Holland crossed on 56 minutes.

A yellow-card shown to Cambridge’s Henry Peck was immediately capitalised upon by Park as Dan Laventure dotted down but the away side couldn’t find another score in the remaining 10 minutes as Richie Williams’ side held on for the victory.

The game was level at the break as scores from Daly and Craig Dowsett were cancelled out by a Rams penalty try whilst James Baker also crossed for the visitors.

‘Club’, who never fell behind in this contest, were able to build an eight-point lead as Mark Cooke landed a penalty before Daly grabbed his second try five minutes from time.

Louis Ellis did nudge over a penalty late on for Rams to clinch a losing bonus-point, but it was Blackheath who claimed the victory in the capital.

Canterbury staged a dramatic second-half fightback but it wasn’t enough as Birmingham Moseley clinched a narrow victory at Billesley Common.

Sam Sterling hit back before the break and the City Men then mounted a comeback in the final quarter.

Osman Dimen was shown a yellow-card for Moseley and Canterbury took advantage as Sam Kenny touched down and the visitors cut the deficit to just four points when Tyler Oliver bounded over.

With six minutes to go, Dimen was then sent off and the momentum was all with Canterbury, but the hosts were able to hold out.

Darlington Mowden Park secured their first home win of the campaign after a fine display against Old Elthamians at the Northern Echo Arena.

Tries by forwards Max Davies and Ralph Appleby helped DMP forge a 20-17 lead as they recovered from a fast start made by OEs, which saw Tom Concu and Adam Batt touch down.

?? Match Shots ?? Some of the best images from Saturday's game against @ElthamiansRFC are now on our website, courtesy of Andy Hall!

Both fly-halves, Warren Seals and Tom White, were kicking well but only the former was able to add points after the interval as the hosts took control of this encounter.

Seals landed another penalty before late efforts from Euan McKirdy and Appleby rounded-off an excellent victory for DMP.

Rotherham Titans came from behind to seal their first away triumph of the season as they defeated Chinnor at Kingsey Road.

Ofisa Treviranus and Sam Yawayawa crossed to give Chinnor a strong start, but a second Sam Hollingsworth penalty kept the Titans in touch.

Jason Worrall dotted down to extend Chinnor’s advantage, but Tom Bacon and Connor Field scored to send Rotherham ahead.

Worrall’s second restored Chinnor’s lead to conclude a thrilling first-half, but after the interval, the hosts were unable to break down a resilient Titans defence.

Hollingsworth pinged over another penalty to nudge the Yorkshire club in front and for all of Chinnor’s efforts, including a late penalty which missed the target, Rotherham clung on to clinch an impressive win.

Plymouth Albion recorded their third home victory in succession after a storming first-half display against Sale FC at Brickfields.

Tries from Jamie Salter (2), Alex Ducker and Dan Swain in the opening 40 minutes put Plymouth 26-10 ahead, with Sale’s points coming via the boot of Chris Johnson and a score by Matt Bradley.

The home side stretched their lead shortly after the restart as Joe Snow dotted down, but Sale then sparked into life.

The impressive Raphael Quirke made an impact from the bench to scoot over before Matt Postlewaite scored as Sale chased a bonus-point.

However, it wasn’t to be for Jonathan Keep’s side as Albion saw out the rest of the contest.

Bishop’s Stortford secured their first victory since the opening day of the season after staging a remarkable comeback in a thrilling contest with Hull Ionians.

A penalty from Tom Walker followed by a George Keen try had put Stortford 8-0 up, but Ben Stephenson, Mike Ogunwole and Billy Hardy all crossed for Ionians to give the hosts an 11-point lead.

George Mewburn’s try sealed Hull’s first point of the season as the home side extended their advantage, but Stortford sparked back into life.

We eventually got what we came for but boy were we made to work for it. Credit to the guys. Second quarter to forget then conceding early in 2nd half but after that it was pretty much one way traffic. I thought @Sammywints89 was outstanding in leading from the front. #neversaydie

Sam Winter and Josh Stannard both crossed before the hour to haul the visitors back into this encounter, but the reliable boot of Max Titchener opened up a seven-point lead for Hull Ionians with 12 minutes remaining.

However, it was Stortford’s turn to be on the right end of some late drama as Chris Smith darted over against a tiring Ionians outfit.

Brad Burr’s penalty and a second score for Winter was ultimately enough for Stortford to complete a storming fightback whilst Hull had to settle for two bonus-points courtesy of Titchener’s boot.