Mixed emotions for Chinnor despite win over title rival 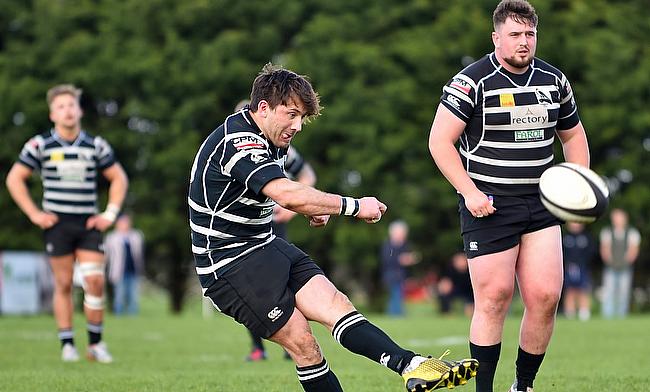 Chinnor knew that anything less than a win against Bishop’s Stortford in Round 27 would end their National Two South title chances, but despite clinching victory, it was a strange weekend for Matt Williams’ side.

The Oxfordshire outfit claimed a narrow triumph over the league leaders, but they failed to pick up a bonus-point which means that Chinnor slipped out of the promotion places. The reason for this was because promotion candidates, Old Elthamians, secured a bonus-point win over Barnes and they are now up to second by virtue of ‘Games Won’.

This intriguing title race is far from over as Bishop’s Stortford now lead the way by seven points and with three games of the season remaining, it really is a three horse race for promotion to National One.

The relegation scrap is as intense as the promotion battle. Bottom of the division Exmouth seem to be on borrowed time after they lost at home to Canterbury while Barnstaple took a huge step towards safety with an historic win over London Irish Wild Geese.

Elsewhere, fellow relegation rivals Worthing Raiders secured two points away at Redruth which could prove vital come the end of this month, while in the top-half of the table, Taunton and Redingensians sealed wins and Cinderford snatched a late draw at Bury St Edmunds.

Chinnor reignited the title race in National Two South with victory over league leaders Bishop’s Stortford, but they have fallen out of the promotion places after failing to pick up a bonus-point.

Despite Matt Williams’ side securing the victory they needed to keep in touch with Stortford, they are now actually third in the table as Old Elthamians sealed a bonus-point win over Barnes which moved OEs into second place by virtue of games won.

Tries from Luke Hibberd and Ben Manning helped Chinnor into a 14-13 half-time lead with Stortford’s points coming via a Jimmy Rea try and the boot of Tom Banks.

Declan Caulfield’s close range try put the visitors ahead after the break, but Chinnor responded as Jonny Bentley crossed to give his side a 21-18 advantage.

This superb advert for National Two South rugby continued to ebb and flow as Nic Clancy darted over for Stortford, but the decisive moments in the game came from the boot of Bentley who slotted over two penalties in the final 17 minutes to ultimately confirm the victory for Chinnor.

The home side couldn’t fashion one more chance to seal the bonus-point so this win for Chinnor now leaves them seven points off Stortford who still have breathing space at the top of this division.

Old Elthamians took advantage of Chinnor failing to secure a bonus-point as they moved into the promotion places thanks to a third straight win against Barnes.

Dominic Lespierre and Alex Brown both score twice in the first-half with James Golledge and Huw Roberts also touching down to put OEs 36-10 ahead at the break.

Jonathan Kopra scored Barnes’ only first-half try with Bradley Packman, Hugo Milford-Scott and Robbie Marley also crossing to secure a deserved bonus-point for Barnes after a much improved display in the second 40.

Lespierre completed his hat-trick in the second-half before Mike Denbee added a further try as OEs secured a vital victory while Barnes remain in the relegation places.

Gary Kingdom kept his nerve to kick Taunton Titans to a third consecutive victory after an extraordinary win against Henley Hawks.

The game was level at 12-12 at half-time with Tom Hall and David Manning crossing for Henley while the in-form Freddie Fraser and Conor Harbison went over for the visitors.

Dan Frost was sin-binned just before the break for Taunton and Henley took advantage of that immediately after the restart as Liam O’Neil put the hosts in front.

Kingdom reduced their lead to just four points with a penalty, but the Hawks tightened their grip on this game on the hour as Sam Portland dotted down.

Taunton now went on the offensive and six minutes from time, Nick Mason latched on to a Lewis Webb pass to cross for a converted score.

Henley looked set to hang on until they conceded two penalties. Taunton elected to kick the second penalty and Kingdom kept his cool to clinch Taunton’s 11th away of the season.

Redruth survived a valiant second-half fightback from Worthing Raiders to seal victory in a thriller at the Recreation Ground.

After Redruth had led 28-5 at the break, a brace from Harry Forrest along with scores from Matt McLean and Sam Boyland earned the Raiders two vital bonus-points which leaves them six points clear of safety.

Redruth were utterly dominant in the first period as they sealed their bonus-point inside 27 minutes thanks to a double from Shaun Buzza and scores from Brett Rule and Nielson Webber.

The second-half was the complete reverse for the Reds as they mustered up just one score via Dean Bonds compared to Worthing’s four, but Marek Churcher’s side held on for a narrow win.

Cinderford could have won the game for the visitors with a conversion, but it went wide.

Sam Sterling, Glyn Hughes, Shaq Meyers and Matt Edison’s tries had given Bury hope of a fourth straight win despite trailing 21-0 at half-time and having Dan Collins sent-off.

But Cinderford – who crossed through Jimmy Williams (2) and  Sam Goatley in the first half – snatched a share of the points as Frame dotted down late on.

Redingensians maintained their excellent recent form with a bonus-point win in an entertaining encounter with Clifton at Old Bath Road.

Scores from James Baker and Robbie Stapley as well as a Penalty Try came before the break with Andy Chesters replying.

Sam Harrison dotted down two minutes later for Clifton, but any hopes of a comeback were ended as Jak Rossiter scored Redingensians’ fifth try of the afternoon just after the hour.

However, Clifton did rally to secure a bonus-point thanks to two tries from Jack Pinker and Finlay Sharpe, but it was the Rams who sealed their seventh win in their last eight matches.

Exmouth have moved closer to relegation as Canterbury ended a run of five straight defeats to beat the divisions’ bottom club in Devon.

The City Men edged a scrappy first half as a penalty and a try from Tom Best put them 8-3 in front after George Meadows had given Exmouth the lead from the tee.

Dan Smart’s try extended the hosts’ lead, but Exmouth hit back as George Billings powered over with just over 10 minutes remaining.

However, Canterbury did not consolidate as JJ Murray crossed to wrap up the much needed win for the Kent outfit while time is running out for Exmouth.

Barnstaple secured their first ever away win in National Two South thanks to this narrow victory over London Irish Wild Geese.

This triumph for Steve Perry’s side also moves them five points clear of safety with three matches of the season remaining.

Fly-half Jordan Petheridge kicked four penalties for Barum to help his side to a huge win in the context of this season.

Wild Geese’s try came via George Drye, but that is all they could muster up in this relegation battle as they remain a place behind Barnstaple in the table.