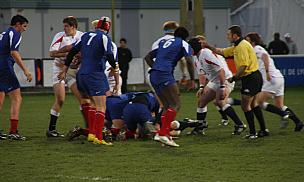 After eight previous stops, in five continents, over six months; the 13th World Sevens Series reached its final destination at the home of English rugby.

Fiji were crowned winners in London, while New Zealand's third place finish was enough for them to defend their world crown.

With a record breaking crowd of over 60,000 filling Twickenham, there were many great matches, and performances to go with it.

However there were some performances that stood out over the two days and brought the event to life.

Now the Spanish aren't known for the rugby, but Cesar Sempere showed there was talent to be seen in the Spanish game.

Currently plying his trade for Championship side Nottingham, Sempere helped his side to their first Cup Quarter-Final in their sevens history, a route which included the scalp of rugby giants Wales.

Having failed to beat the Welsh in seven attempts, Spain won 22-7, and alongside a respectable 19-5 defeat to Fiji and a 38-0 mauling of Zimbabwe, qualified to play Samoa where they ¦.

Sempere contributed five tries in a total of 31 points to seal a memorable weekend for the rugby minnows.

For those well informed in the Sevens scene, this selection will surprise few. Cama has been around a long time and is 10th on the all-time Sevens World Series appearance list.

Cama has been awarded the title of IRB Sevens player of the year ahead of team-mate Frank Halai and England's Mat Turner.

Cama scored 29 points on day one of the tournament (three tries), and top scored in their Cup Quarter Final drubbing of South Africa with 11 of his side's 36 points.

Despite being beaten by eventual winners Fiji, New Zealand breezed past Argentina in the 3rd/4th playoff and were crowned World Series Champions for a tenth time “ A match which saw Cama top score with 18 points as he contributed a pair of tries and converted four times, on his way to finish leading points scorer with 60.

While there has been much talk about James Rodwell and Mat Turner, Tom Mitchell has been the star of this weekend's sevens for England.

Though the hosts haven't had the best of times, losing to Samoa in the Pools on Saturday before being knocked out of the Quarter finals by Fiji; Mitchell has been Mr. Consistent over the two days in London.

Scoring two tries and slotting 5 kicks, Mitchell created chance after chance for his team-mates and was unlucky not to score a few more times.

Mitchell also broke the line to provide the score that saw England past South Africa in the Plate Semi-Final on day two.

England were unfortunate to lose in the final against Australia, but have plenty of promising talent to be encouraged by.

No team had a more up and down time of things in London than South Africa.

Blitz Bokke finished second in the pool after losing to a last second conversion against Australia, and were then pummelled by New Zealand in the cup quarter-final.

This was rounded off by another last second defeat, this time to England, though one constant throughout, were the performances of Branco Du Preez.

Du Preez was superb with ball in hand and provided a number of line breaks and key offloads for his opponents to create scores from.

If ever you could describe a sevens player as having been there, done it and got the t-shirt; then D J Forbes is definitely that man.

The 29 year old from Auckland has played in 51 sevens World Series meetings and crossed the line for his 100th try in London.

He also has a commonwealth games gold medal to go with the title of Sevens player of the year in 2008.

Forbes was central to New Zealand's successes over the weekend and has played an integral part in their winning of the World Series.

He finished the weekend with 103 scores and converted the final try of his side's 40-0 drubbing of Argentina in the third place playoff.

Despite winning the bowl final against Scotland, Wales' tournament was wholly disappointing.

However, Dan Fish was a shining light in an otherwise dull weekend for the men from the valleys.

At just 21, Fish has been involved with the international set up in both sevens and the fifteen man game when he was named in the U-20s squad.

He is also involved with Cardiff Blues and showed his class by scoring five tries over the two days “ his sides leading scorer.

Mat Turner- the IRB sevens player of the year nominee had another good tournament, touching down five times to finish joint third in the try scoring charts.

Tom Iosefo “ the Samoan was instrumental in seeing his side to the cup final, scoring a tournament high eight tries in the process.