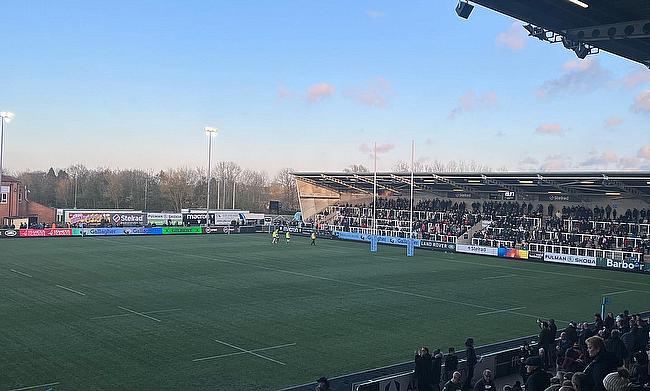 After three back-to-back losses in the Premiership, London Irish are back to winning ways after putting Six tries past Dean Richards’ Newcastle Falcons on Friday night.

Much of this game was played in a state of befuddlement, as London Irish got the rub of the green on multiple occasions, leading to several of the visitors’ scores.

It was at the scrum where much of this confusion came from, Irish’s first score coming after referee, Karl Dickson, spent multiple minutes resetting the set piece, Kyle Rowe dotting down in the corner.

Paddy Jackson easily converted the score, but it was in the minutes that followed which some of the Exiles’ decisive work was done. Sean Robinson scored a converted try for Newcastle after concentrated pressure five meters out.

The former Durham University man soon found himself in hot water, sent to the bin for not entering through the gate.

Even in Robinson’s dismissal, it was uncertain for a period as to exactly why the former England call-up was sent to the side lines, Newcastle conceding a try to Albert Tuisue at the resulting scrum, the Fijian picking from the base to go over.

Following Agustin Creevy’s 30th minute try, a fracas broke out between both sets of players. Plenty made their way to the ground, the BBC Radio Newcastle commentators describing the incident as having had “punches thrown”, but the TMO was not brought into the conversation.

As proceedings wore on, those in Newcastle shirts began looking bemused at best, a series of outstretched arms and downward glances becoming the norm, any decision going Falcons’ way met by derisory cheers.

Ollie Hassell-Collins’ try came from circumstances similar to Rowe’s first. Dickson reset the scrum twice, then a third time after play had moved to the right wing and Newcastle had driven the play back.

In the end it took a flick of the wrists to send Hassell-Collins over, Jackson knocking the ball over the posts with ease, the bonus point secure.

Falcons would end the half of something of a high note. A bright spark for Newcastle all night, Mateo Carreras tapped and went, crashing into two of the Irish forwards, Ben Stevenson scoring acrobatically in the corner, Joel Hodgson’s superb kick ending the 40 minutes.

As second halves go, this was one was fairly quiet. An impressive break came from Henry Arundell fresh from the bench was all to write home about until Curtis Rona made use of the possession in Newcastle’s half and powering over in a central position.

Replacement hooker, Matt Cornish scored off the back of a pinpoint cross field kick, and although there was a question surrounding his movement after being tackled initially, the try was given.

The TMO was called into action with less than three minutes left on the clock, the resulting decision being that both Newcastle’s Gary Graham and Londin Irish’s Facundo Gigena saw red for forehead to forehead contact.

“We missed so many opportunities to score tries, and had we taken them it might have been a different thing all together,” Dean Richards, Newcastle’s Director of Rugby, said.

“There were opportunities there, it is just having the discipline to actually execute. We train every week and make it happen, which is what we didn’t do today and that was probably the story of the day.”

When asked what he thought the point of difference was in the game, Richards was quick to cite Sean Robinson’s early yellow card as a potentially decisive period in the fixture.

“It is amazing how much a yellow card costs you these days,” he said. “They say it costs you two scored, which is exactly what it did.

“We clawed one back before half-time, came out in the second half and had 10 minutes of good pressure and just couldn’t convert that pressure into points.

“To be fair to them, you look at their side and I think one of their players, [Adam] Coleman, costs as much as our backline.

“It gives you a measure of the quality they have got in the side, with people like Creevy and Simmons and [Steve] Mafi.

“Our boys stuck at it, and it just became a little bit fragmented at the end with the way they played. They took their chances, and we didn’t.”

When it came to the visitors, Assistant Coach Declan Danaher is the man facing up to the press.

On Tuesday, his team have a Premiership Rugby Cup semi-final with Leicester Tigers in Brentford, before a clash with Wasps in the Premiership before turning their attentions back to Europe.

“We are fighting on three fronts,” he said. “We are in the Cup on Tuesday against Tigers, we play Wasps again in the league on Sunday and then we go to Toulon.

“It is that crazy time of year, everything is happening, but what I think is pleasing is that the lads are – off the back of the two previous performances in the Premiership – making a massive statement. To win away – we haven’t won here in eight years – that is really good.”