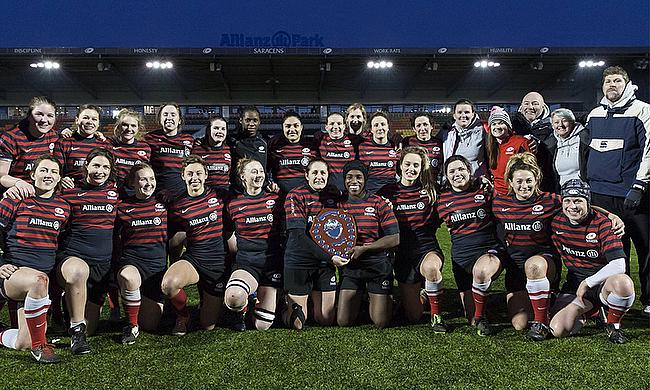 Saracens captain Kat Evans is confident of the women's sport scaling to greater heights after her team clinched the Women's Premiership Rugby 7s title defeating Bristol in the final.

Garnet MacKinder, Seraphine Okemba and Nina Vistisen scored tries in the first half to take Saracens to 17-0 lead at the half-time.

Even though Tilly Vaughan-Fowler's try in the second half gave some respite for Bristol, MacKinder and Vistisen crossed the line for the second time in the game to ensure Saracens won the game comfortably by 29-7 extending the dominance led by the men's team earlier with the double triumph of Aviva Premiership and European Champions Cup.

Evans believes the triumph will instill the belief in the squad for the rest of the season. The dynamo hooker also stressed on the importance to create a comfort level for the new recruits to bring the best out of them.

"It's really good to have a trophy so early in the season, we have quite a new squad, we have a lot of new players coming through and we've only just started working together," she said.

"We've had a really hard pre-season and it just shows we're looking good to start the new season.

"Obviously we want to make the new players feel at home so having games, training, working with them making them feel comfortable and part of the club is really important.

"It's really important to a successful team, you can have internationals but you need to grow your team and you need depth so for them to come in and feel part of the club is a key thing to do."

In 2014, England went on to win their second Women's World Cup tournament while Great Britain went on to reach the semi-finals of the women's sevens competition at the Olympics.Evans is glad to see the women's game gaining the repetition and is hopeful of getting more opportunities in the upcoming seasons.

"It feels amazing, it was such an experience being able to play on a pitch here and with such a big crowd and being televised as well it shows the women's game is growing.

"Opportunities like this don't come around very often but hopefully we'll get a lot more opportunities this season, next season and beyond."