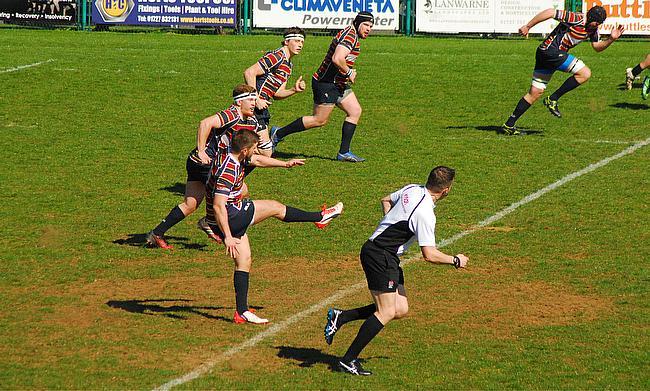 Will Chinnor be Christmas Number One?
National Two North serves up Christmas crackers
Festivities on hold as local rivalries take centre stage in National One

As the National Leagues now take a break for the New Year celebrations, we take a look back at the final round of fixtures in 2017.

An inspired first half performance was the difference as league leaders Coventry dispatched local rivals Birmingham Moseley 41-17 in clinical fashion at Billesley Common.

Rowland Winter’s side were 36-3 up at the break and a dominant display in the opening 40 minutes was enough to see them clinch their 15th straight win of the campaign.

Cov are 13 points clear at the summit heading into the New Year, but second placed Darlington Mowden Park are doing all they can to keep the Midlands side in their sights after a 26-0 victory over Hull Ionians.

Plymouth Albion also racked up another win as Joe Snow’s try in the final 10 minutes was enough for Kieran Hallet’s men to edge out Esher 33-29. There were also wins for Bishop’s Stortford, who beat Old Elthamians 34-20, and Cambridge who came away from Loughborough Students with a 28-21 win.

Down at the bottom, Fylde will begin 2018 at the foot of the division as they fell to their 13th defeat of the campaign following a 34-9 loss against Caldy. Relegation rivals Old Albanian produced a stirring comeback to clinch a 35-35 draw at home to fourth place Ampthill and District while Rosslyn Park also had a share of the spoils following a 17-17 stalemate at Blackheath.

National Two North table toppers Hinckley bounced back in style as they produced a brilliant second half display to beat Huddersfield 41-18. Tries from Tom Wheatcroft, James Martin, Joe Glover and Joe Wilson was enough for the Midlands club to return to winning ways after a defeat to Chester in Round 15.

The win for Hinckley leaves them four points clear of second placed Sale FC, who beat promotion rivals Sedgley Park 20-13 at Heywood Road thanks to tries from Danny Birchall and Jake Barron. Jonathan Keep’s side have now won their last eight matches and they also have a game in hand over Hinckley.

Tynedale jumped back into the top three as they produced a remarkable comeback to edge out near neighbours Blaydon, 32-31. Scott Lawson’s men had trailed by 11 points with 20 minutes to go, but his side battled back to claim a fifth straight victory. Fellow promotion candidates Stourbridge also worked hard for their victory as they beat Luctonians 39-36 at Moritmer Park thanks to a late score from Sam Montieri.

At the wrong end of the table, Otley secured their second win on the spin as they beat bottom of the table Wharfedale 20-13 while Sheffield are now just four points from safety following a 25-21 victory over rivals Sheffield Tigers. There was also a first win for Macclesfied’s interim boss Marshall Gadd as the Blues clinched their first victory since September as they beat Chester 24-14. Meanwhile, Rickie Aley was once again the man of the moment for South Leicester as he helped his side snatch a share of the points against Leicester Lions.

Chinnor made it 15 consecutive victories in National Two South as they edged a scintillating local derby 33-28 against Henley Hawks at Dry Leas. Four first half tries from Mike McDonald, George Oliver, Phil Chesters and Will Bordill had put the league leaders in control, but they were made to hold on to their lead after a battling second half performance from the Hawks.

Matt Williams’ side remain one point clear at the summit as second placed Cinderford recovered from a poor start to beat Clifton 33-20 as the two horse race for automatic promotion and the league title continues to gain momentum.

Elsewhere in the top half, Redingensians made it 10 wins from their last 11 matches as they thrashed London Irish Wild Geese 52-12 while Taunton Titans ended 2017 on a positive note with a 36-17 win over Old Redcliffians. Also, Redruth eased to a 41-0 triumph over Barnstaple and Bury St Edmunds comfortably beat Broadstreet 44-15.

Meanwhile at the bottom, Wimbledon picked up two points in a 35-28 loss at Worthing Raiders while Tonbridge Juddians made it back to back wins as they edged out Canterbury 22-19 at the Marine Travel Ground.