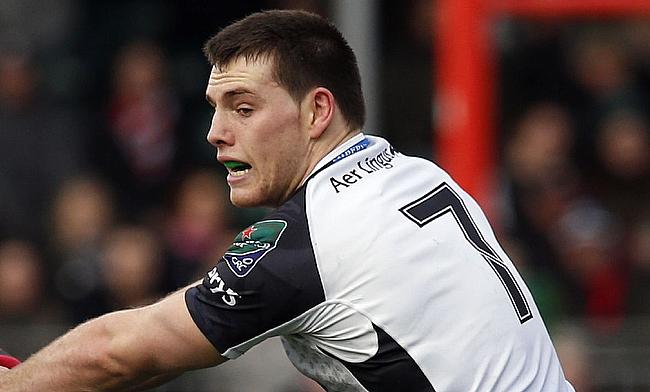 Connacht boosted their Guinness PRO12 play-off hopes with a 30-17 bonus-point win over the table-topping Scarlets at the Sportsground.

The hosts' dominant scrum and maul provided the platform for a 13-0 interval lead, with flanker Jake Heenan crashing over twice.

Having opted to play into a strong wind during the first half, the Scarlets turned around with the elements in their favour and hit back with a 10-point blitz, including a DTH van der Merwe try.

But yellow cards for Phil John (scrum) and Tom Price (high tackle) in quick succession left the league leaders under all sorts of pressure, and tries from man-of-the-match Buckley and Ah You settled the issue.

Although Gareth Owen responded for the weakened Scarlets side, their late push for a losing bonus point went unrewarded.

With their forwards on top, Connacht made all the early headway with Matt Healy almost touching down from a Jack Carty penalty that bounced back off the right-hand post.

The Connacht fly-half nailed his second place-kick in the eighth minute, rewarding some purposeful attacking from their centre partnership of Bundee Aki and Robbie Henshaw.

The Scarlets' Kiwi captain Hadleigh Parkes slashed open the Connacht midfield on the quarter-hour, with Liam Williams - making his first regional appearance since last May - just held up near the left corner.

While the visiting backs looked potent, their pack had no answer when Connacht muscled over for their opening try with 21 minutes gone. Carty plunged them back towards their line from a scrum penalty and Aly Muldowney's lineout take set up a maul that ended with Heenan crashing over.

Carty's again found the woodwork with his conversion attempt and Connacht struggled to gain ground in the second quarter, the loss of lively winger Healy to injury not helping their cause.

A powerful run up the right touchline from Henshaw got them back on track. The Scarlets held out initially but their scrum leaked another penalty and Heenan got over from a carbon copy lineout maul. Carty's conversion this time went narrowly wide.

An improved scrum and three points from the boot of Thomas saw the Scarlets quickly make inroads on the resumption.

The gap was down to three points just moments later, Ryan Elias scooping up a loose Connacht ruck ball and breaking from halfway with Owen's final pass putting Van der Merwe over for a seven-pointer.

The sin-binning of prop John following a scrum warning allowed Carty to make it 16-10, and the Scarlets were down to 13 men after lock Price saw yellow for a neck-high challenge on Caolin Blade.

Buckley and Carty combined to restore the Irish province's 13-point lead, the former muscling over from another lineout maul that marched forward in the 51st minute.

Ulster-bound Ah You then took a great line in the 62nd minute, powering onto a Blade pass to go through two tackles and touch down from close range, with Carty converting.

The damage had been done but the Scarlets enjoyed a strong finish, some neat handling releasing centre Owen to go over in the right corner with Thomas brilliantly adding the extras.

Into injury-time, Connacht had replacement hooker Dave Heffernan sin-binned for repeated infringements before the Scarlets' bid for a losing bonus point fell short with Steve Shingler being bundled into touch.