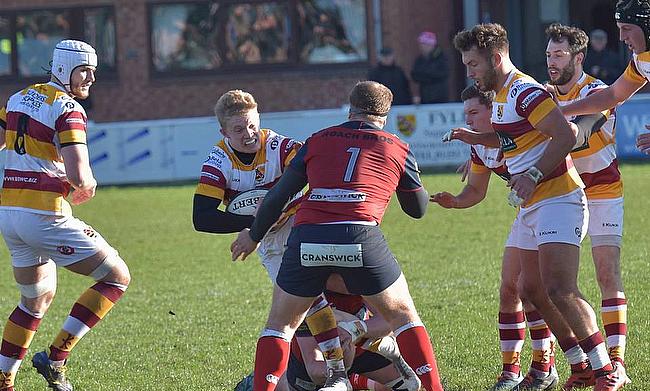 Fylde can solidfy their place in the title race with a win against Hull Ionians this weekend.
©Chris Farrow

Hull Ionians will be aiming to return to winning ways in National Two North when they host title rivals Fylde in arguably the biggest game of the season so far.

At the beginning of December, Ionians were nine points clear at the top but after a tough couple of months, Martyn Wood’s side are now third in the table and two points off the summit.

This weekend, they host the current league leaders Fylde after the Lancashire outfit moved into pole position in Round 22 as the battle for promotion was blown wide open.

Second-placed Chester are only one point behind Fylde ahead of their clash with Stourbridge while fellow title challengers Huddersfield travel to Hinckley. Otley also cannot be ruled out of the race for a top two finish and they will be keen to continue their excellent form when they visit Tynedale on Saturday.

You just couldn’t write it. Well…you could, but this clash between Hull Ionians and Fylde has fallen at a crucial time in the National Two North season. At one stage this term, Hull were streaking clear at the summit of the division, but that has all changed since the beginning of 2019. Three consecutive losses means Martyn Wood’s side have fallen to third place in the table and their recent defeat against Chester also put a dent in their promotion hopes.

However, the bigger picture needs to be focused on. The I’s are only three points off the top with a game in hand and they have the perfect opportunity to bounce back when they host the new league leaders this weekend. Fylde will arrive in Yorkshire as the hunted rather than the hunters and Warren Spragg’s men have been superb since the Lancashire club last faced Hull Ionians back in October. Just one defeat in their last 13 matches has seen them move to the top of National Two North and if they were to become the first side to end Hull Ionians’ 10 match winning run at Brantingham Park, then Fylde could take another step towards an immediate return to National One.

Chester blew the title race wide open in Round 22. An excellent 26-20 win over rivals Hull Ionians added a further twist to the promotion battle in National Two North and also moved Jan van Deventer’s side back into the top two. The Cheshire outfit are now one point behind league leaders Fylde and also, they have a game in hand to come against Hinckley next weekend.

Their fate is firmly in their hands, but first up for Chester, is a trip to an improving Stourbridge outfit. Neil Mitchell’s men are going through one of their best spells in a very tough season for the Midlands club thanks to three wins from their last four games. Victories against Peterborough Lions, Hull Ionians and South Leicester have certainly lifted spirits at Stourton Park and they will be hoping to continue the feel-good factor by beating a promotion candidate this weekend.

With Fylde taking on Hull Ionians this weekend, Huddersfield will surely be keeping an eye on proceedings at Brantingham Park. Field currently occupy fourth spot in the table and a run of six straight wins means they are only three points behind the leaders heading into Round 23. Crucially for Gareth Lewis (who signed a new two-year contract this week), his side have two games in hand but to make them count, they must continue their excellent form.

The men from Lockwood Park will be tested this weekend when they visit Hinckley. Despite the hosts suffering more away day blues against Fylde last Saturday, George Chuter’s men seem to be a completely different proposition at home. The Hornets have lost eight of their last nine matches on their travels, but at Leicester Road, the sixth-placed side are unbeaten in 11 months. Hinckley are 15 points off the top two so their promotion chances are slim, but another home triumph against Huddersfield may give them a glimmer of hope.

Otley produced a powerful performance and fought back to defeat Sheffield Tigers in Round 22. Charlie Maunder and Tom Casson’s men still have to be considered as promotion contenders as their latest victory leaves them six points off the top two and it is there recent form which has kept them in the conversation.

Eight victories from their last 10 games means they sit fifth in the table, but hoping to dash their possible promotion ambitions will be Tynedale. The North-East outfit come into this clash on the back of a sparkling performance against Sedgley Park which saw them return to winning ways. After losing to Fylde in Round 20, Ben Woods’ men scored eight tries last week and Tyne are now up to seventh in the league standings. They are back at Corbridge on Saturday where Tynedale haven’t lost since September and with four wins from their last five games under their belt, the hosts may well be confident against an in-form Otley side.

Sedgley Park’s Matt Riley took to Twitter last Sunday. After Sedge’s tough loss against Tynedale in Round 22, one of the club’s longest serving players said it had been a frustrating season for his side with “performances far lower than expectations and aspirations.” Riley went on to say Sedge have nine game to put things right and last year’s play-off runners-up will be keen to end the campaign in a positive manner.

This weekend, they have the chance to bounce back from their eight try defeat against Tyne when they visit bottom of the table Peterborough Lions. The Lions’ fate seems to be all but sealed after their most recent defeat against Huddersfield as the men from Bretton Woods are now 23 points from safety. They have picked up just four wins all term, but they have all come on their own turf and with time running out, they will be hoping a fifth victory occurs this weekend.

Last weekend, Paul Arnold watched his Preston Grasshoppers side from a rooftop at Lightfoot Green as they put in a superb display to beat Leicester Lions. The head coach was delighted with the “controlled” performance his team produced and with Arnold overseeing the 29-0 victory from an elevated view, Hoppers have certainly hit the heights this term.

Following promotion from North Premier last April, the Lancashire club now sit just one point outside the top half of National Two North and up next for Preston is a trip to Sheffield Tigers. The hosts are looking to the future after announcing Jamie Broadley and Robin Hislop have re-signed for the 2019/20 season and they will be keen to end this term strongly to lay the foundations for the next campaign. The Yorkshire outfit are nine points clear of the danger zone at the moment and they will be eager to improve on just one win in six on Saturday.

Wharfedale were quite rightly glowing after last week’s victory over Macclesfield. On a gloomy day in Cheshire, Dale’s quality shone through as the Yorkshire outfit secured their third win on the bounce. Rob Baldwin and Jon Feeley have done an excellent job this term and it looks as though the Greens will finally avoid a relegation scrap this year after moving 15 points clear of the bottom three.

Dale can increase that gap this weekend when they entertain South Leicester, but the Midlands club will realise this could be a chance for them to boost their survival hopes. South are currently nine points from safety following their loss to Stourbridge last weekend, but it is far from over for the men from Welford Road. South lost 22-19 to Dale back in October and they will be eager to end up on the right side of the scoreline this time around.

Leicester Lions head into this weekend 10 points clear of the drop and Andy Key’s side still have some breathing space between themselves and the trapdoor. The Midlands outfit had produced a flurry of victories before Christmas which enabled them to move away from danger, but just one win from their last five games has left them on the cusp of the relegation battle.

Marshall Gadd @gaddaffi84 discusses the trip away to @leicesterlions1 with Ben Jaycock of #maccrugbytv pic.twitter.com/rPOQN2wazc

However, the Lions can take a step away from the drop zone when they host Macclesfield this weekend. Head coach Marshall Gadd gave an honest assessment of the Blues’ defeat against Wharfedale in Round 22 and the Cheshire club are now 19 points from safety. Macc have suffered six straight defeats and have lost all 11 of their away fixtures this term. Macclesfield will want to end those unwanted records this weekend because if they don’t, the threat of relegation will only grow.